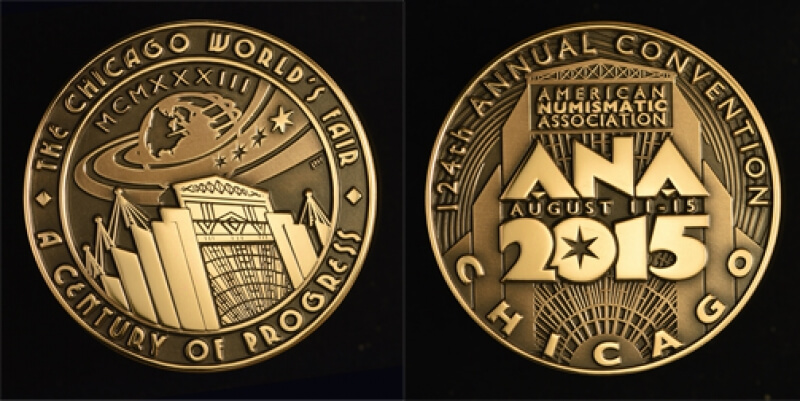 30 Jul 2015
Medallic artist Jamie Franki has created a beautiful and stunning commemorative medal for the American Numismatic Association’s 2015 World’s Fair of MoneySM, coming to the Donald E. Stephens Center in the Chicago suburb of Rosemont, Illinois, Aug. 11-15, 2015. The medal, the fourth in a series inspired by the stars on the Chicago municipal flag, depicts the city’s famed 1933-34 World’s Fair, the Century of Progress.
The 2015 World’s Fair of Money convention medal will be available at the #ShopANA kiosk, table 1900, or it can be ordered by calling 1-800-514-2646. Orders are scheduled to ship after the convention. There is a shipping-and-handling charge of $6.95 for each order.
Ordering options include:
Convention Medal Badge (1.5” bronze medal with ribbon drape)  — $20 (125 available)
Bronze Medal (2.75”, numbered) — $60 (100 available)
Two Medal Set (one each .999FS and one bronze, 1.5”, numbered) — $125 (125 available)
Each star represents an important event in the city’s history. The 2011 issue commemorated the Battle of Fort Dearborn. The 2013 issue captured the tragedy of Chicago’s Great Fire and the city’s triumphant rebuilding from the ashes. The 2014 issue celebrated the World’s Columbian Exposition, held in Chicago in 1893. For 2015, the official medal of the World’s Fair of Money finishes the four-medal set with a Century of Progress theme from the Chicago World’s Fair held in 1933-34.
After the ANA chose Chicago as the host city for the World’s Fair of Money in 2011, 2013, 2014 and 2015, Franki was commissioned to create four medals to commemorate the four conventions. Franki will present a special Money Talks lecture on Friday, August 14, at noon Central Daylight Time in Room 6.
The Century of Progress International Exposition was a celebration of the Chicago Centennial. This World’s Fair was themed around new advances in technology. Art Deco style was pervasive in the design of the major attractions and promotions of the fair. The fair’s motto was “Science Finds, Industry Applies, Man Conforms.”
The Century of Progress Exposition opened while the country was still struggling within the grip of the Great Depression. Ironically, the fair was such a financial success that it was held over into 1934. It became the first American-held World’s Fair to earn a profit.
To commemorate the Century of Progress Exposition and tie it in with the Chicago Municipal flag, Franki researched examples of architecture and collectible ephemera to find visual themes and a style direction for design. The official emblem of the Exposition featured a depiction of Saturn. The Saturn logo appeared as an element on many of the Fair’s printed promotional designs and lacquered decorative collectibles.
“I transformed the emblem into a depiction of our world, with the orbital rings starting in Chicago and reaching out beyond as its Municipal Flag. I raised the fourth star to indicate it represents the Century of Progress. Both obverse and reverse have designs inspired by the façade of the Exposition’s Travel and Transportation building,” Franki explained. “This pavilion used a system of cabled supports around the exterior walls that supported a huge dome – without needing any additional columns to support the ceiling from inside. It was a striking example of 1930s formal and functional modernity in architectural design.”
Because his medal design concept was so deeply connected to the ideals of Art Deco, Modernity and Technology, Franki elected for an entirely mechanical production strategy as a method to produce the medal.
“Most of my projects involve handcrafted organic and traditional processes such as pencil drawing, modeling in clay or sculpting in plaster to create project designs and masters. For this project, I wanted to create something in the spirit of the Fair’s celebration of state-of-the-art machine technology. Today, the state of the art is calculated in zeroes and ones. I made the designs as digital vectors, to be wirelessly emailed and used as digital masters for computer-numeric control die engraving.”
Franki is an associate professor at the University of North Carolina at Charlotte where he coordinates the Illustration program and serves as Associate Chair of the Department of Art + Art History. He has been an instructor in higher education since 1988. He holds a master’s in fine arts in illustration from Syracuse University. In 2005, his American Bison nickel reverse design was selected for a six-month minting and won a Coin of the Year Award. In 2006, his Jefferson 1800 nickel obverse design began its long-term run. In 2008, Franki designed the Order of IKKOS Medal, the United States Olympic Committee’s perpetual honor society award for Team USA coaches. He has designed numerous National Money Show and World’s Fair of Money medals.. He also redesigned the Heath Literary Award medal. In 2011, Franki was awarded the ANA Presidential Award for his artistic practice and service to the numismatic community.
The World's Fair of Money is the nation's premier money show, featuring the most expansive educational programs and best numismatic inventory of any summer show. The show features more than 1,000 numismatic dealers; major auctions by Stack's Bowers Galleries and Heritage Auctions; the ANA's signature Museum Showcase, exhibiting some of the world's most valuable and beautiful coins and paper money; the Collector Exhibits area; as well as educational presentations and seminars. Show hours are 10 a.m. to 5:30 p.m. Tuesday through Friday, Aug. 11-14, and 10 a.m. to 4 p.m. for Free Admission day on Saturday, Aug. 15. Public admission is $6 for adults and free for children 12 and younger. ANA members are admitted free, and admission is free for everyone on the final day of the show. For more information, go to WorldsFairofMoney.com.
The American Numismatic Association is a congressionally chartered nonprofit educational organization dedicated to encouraging people to study and collect money and related items. The ANA helps its 25,500 members and the public discover and explore the world of money through its vast array of education and outreach programs, as well as its museum, library, publications, conventions and seminars. For more information, call 719-632-2646 or go to www.money.org.
CONTACT: Jake Sherlock
Telephone: 719-482-9872
E-mail: pr@money.org
Tags
Categories
Archive
Share this on:

Older blog, but what a cool design! Love it! Thanks for the information!

Glad I found this. That is 1 stunning design.

That is indeed a "beautiful and stunning commemorative medal". Thanks for the information (the coin, the artist and the history)!!!