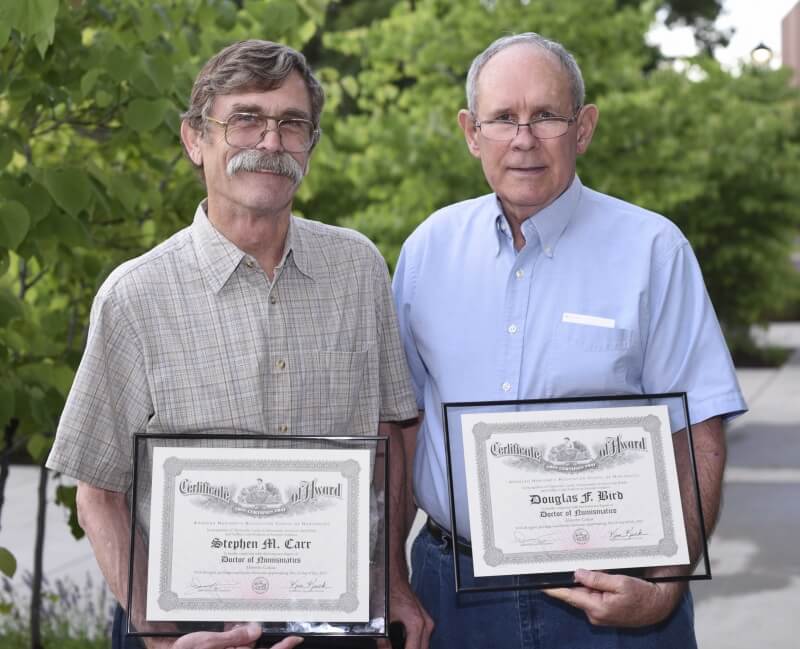 09 Jul 2015
Douglas Bird and Stephen Carr honored during Summer Seminar banquet
Douglas F. Bird and Stephen Carr were awarded honorary Doctor of Numismatics degrees from the American Numismatic Association Florence Schook School of Numismatics on Wednesday, July 1, at the Session 2 graduation banquet for the 2015 Summer Seminar.
“This is simply the nicest thing that could happen in terms of a career in coins and numismatics in general,” Bird said. “I have to give considerable praise to my partner here, who does 90 percent of the work. I just smile a lot.”
Carr added, “I want to stress that I could not have done this without my compatriot in the class, Doug. He gives me credit for a lot of things, but he has also done many things.”
The duo has taught the Early American Copper Coinage class at Summer Seminar for several years.
Both men started collecting large cents at the age of 9. Carr also collects Kansas National Bank notes. Both are Life Members of the ANA and actively involved in Early American Coppers.
Bird has been a full-time dealer since 1982. Carr is recently retired from a career as an automotive instructor.
“It was totally unexpected. I’ve known other people who have earned the Honorary Numismatic Doctorate, and in my opinion, they are all more deserving,” Carr said. “I think back to all the time I’ve spent in numismatics and all that I’ve done, and the recognition is extremely great.”
The American Numismatic Association is a congressionally chartered nonprofit educational organization dedicated to encouraging people to study and collect money and related items. The ANA helps its 25,500 members and the public discover and explore the world of money through its vast array of education and outreach programs, as well as its museum, library, publications, conventions and seminars. For more information, call 719-632-2646 or go to www.money.org.
Tags
Categories
Archive
Share this on: