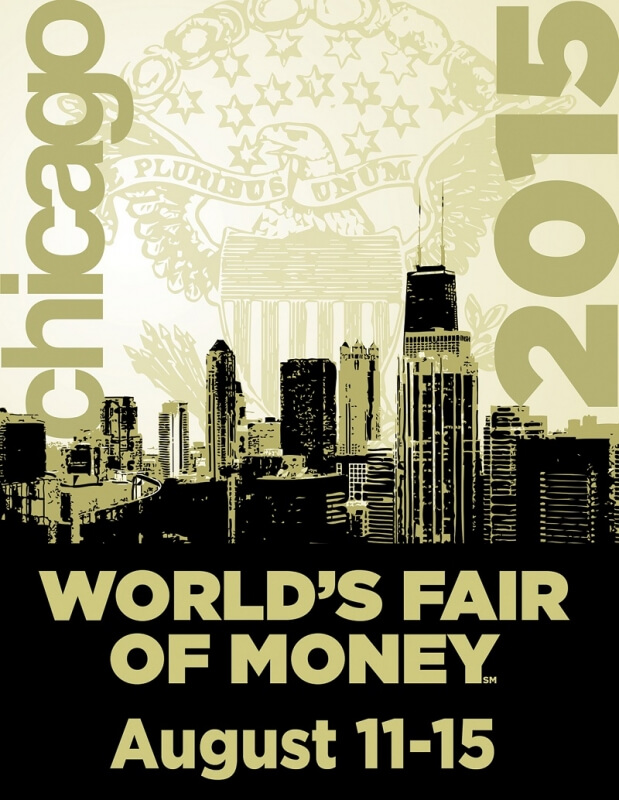 See some of the world's most famous and valuable rare coins and currency at the World's Fair of Money, August 11 - 15, 2015.

(Rosemont, Illinois) – Midwest residents will have their last chance to get free appraisals of their old coins and paper money and see $1 billion of historic rare coins and colorful currency – including $100,000 bills -- at the World's Fair of Money (www.WorldsFairOfMoney.com) in Rosemont, Illinois, August 11 - 15, 2015.  After three consecutive years in the Chicago area, the annual event resumes its rotation of moving to other cities next year.
The family-friendly, educational 2015 World's Fair of Money will be in the Donald E. Stephens Convention Center, Hall F, in Rosemont and will be open to the public.
Sponsored by the nonprofit American Numismatic Association, the five-day event will also have displays by government and private mints from around the world, and more than 1,000 coin and currency dealers will be buying and selling items ranging in price from only a dollar to over a million dollars.
Admission will be free on Free Appraisal Day, Saturday, August 11, when the public can get complimentary, educational appraisals of their old coins and paper money from top numismatic experts between 11 am and 2 pm.  Eye-opening exhibits of numismatic treasures from the American Numismatic Association Money Museum in Colorado include:
• A $2.5 million rare nickel formerly owned by a Milwaukee man who frequently carried it in his pocket to show to strangers
• A rare 1804-dated U.S. silver dollar insured for $4 million
• An exhibit of the world's earliest coins that are more than 2,700 years old from ancient Greece
• A display of World War II medals to commemorate the end of the war 70 years ago
• Printing press sheets of colorful, large-size, century-old USA paper money
• An exhibit by Banco de Mexico of historic Mexican Colonial era coins
Representatives of the United States Mint and a half dozen other mints from Asia, Europe and South Africa will be displaying and selling examples of their latest gold and silver coins specially struck for collectors.
Visitors can also see the Bureau of Engraving and Printing’s “Billion Dollar Showcase.” The display features $500 million Treasury Notes, $100,000 Gold Certificates and other high denomination United States notes.  The showcase also includes the 1896 Educational Series of paper money including the $1 Silver Certificate with a portrait of Martha Washington.
"Money is history you can hold in your hands.  Every coin and every piece of paper money ever made has a story to tell about people, places or events," said Walter Ostromecki, President of the Congressionally-chartered, 25,000 member American Numismatic Association (www.money.org).
Public auction of rare coins and currency will be conducted by Heritage Auctions and Stack's Bowers Galleries in conjunction with the show that is hosted by the Chicago Coin Club.
The World's Fair of Money will be held in Hall F of the Donald E. Stephens Convention Center, 5555 N. River Rd., in Rosemont.  Public hours will be 10:00 am to 5:30 pm Tuesday through Friday, August 11 - 8, and from 10 am - 4 pm Saturday, August 15.
Admission is $6 for adults and free for children 12 and under the first four days of the show.  There will be complimentary admission for everyone on Free Appraisal Day, Saturday, August 15.  Discount admission coupons and additional details about the show are available online at www.WorldsFairOfMoney.com.
News media contacts:
Donn Pearlman, (847) 971-0566
Tags
Categories
Archive
Share this on:

I will read any blog I can. I want to learn. I also will write blogs to help others and share with them I don't care if it's from 2015. I wasn't here then I might pick something up but I read and write. I think writing is more important but I have to read to learn not just f o e comments