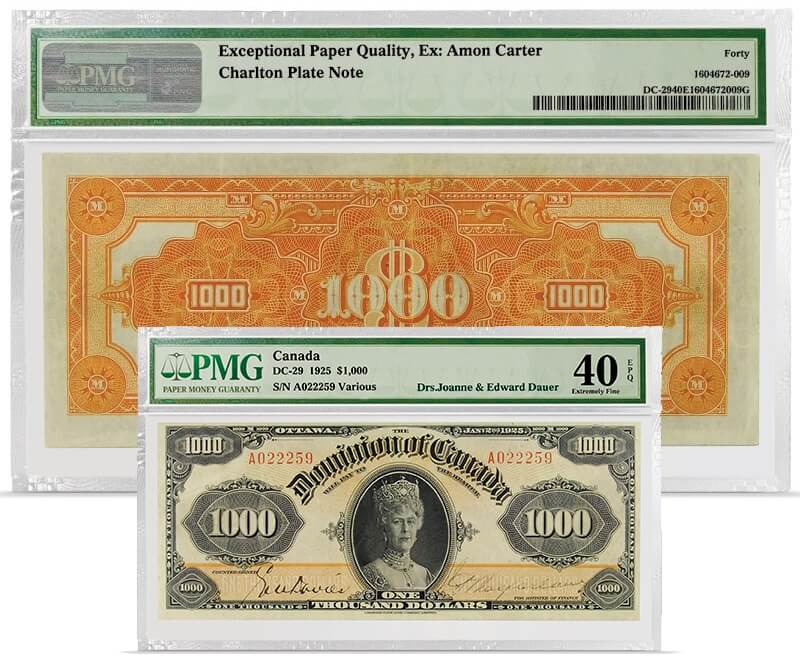 14 Jul 2015
SARASOTA, Fla. (July 14, 2015) - In celebration of its 10th Anniversary, Paper Money Guaranty® (PMG®) will display a dozen superb PMG-certified notes from the Drs. Joanne and Edward Dauer Collection at its booth (#1506) during the ANA World’s Fair of Money in Chicago, August 11-15, 2015. PMG is the official paper money grading service of the ANA.
The Dauer Collection notes include both US and world rarities. Perhaps most significant are two $1,000 notes from Canada. One is a 1911 DC-20 graded PMG Fine 12 that is the only example in private hands, while the other, a 1925 DC-29 graded PMG Extremely Fine 40 EPQ, is the finest of just three pieces held by collectors.
PMG’s display will feature the finest United States 1874 Fr. 185a $500 Legal Tender Note, this example graded PMG Very Fine 30 and pedigreed to the Amon Carter Collection. Two 1869 “Rainbow Notes” will also be shown along with other rarities from the US, Canada, Bermuda and East Africa.
“Eddie and Joanne Dauer have built a phenomenal collection of paper money and we are very happy that they have allowed PMG to display some highlights,” says Sergio Sanchez, a PMG consultant who has worked with the Dauers for many years. “These notes are certain to excite paper money specialists and casual observers alike.”
Drs. Joanne and Edward Dauer have used PMG to certify many of the most important rarities in their collection. Explaining the impact of PMG on the hobby in the last decade, they say: “The grading and preservation services offered by PMG have provided credibility and safety to an ever increasing number of new collectors.  Beginning as well as advanced collectors can now rely on the professional expertise of PMG. This has been a significant factor in the growth and popularity in paper money collecting.”
A flyer with images and descriptions of select notes to be displayed from the Drs. Joanne and Edward Dauer will be available at the PMG booth (#1506) and on the PMG website.
About Paper Money Guaranty® (PMG®)
Founded in 2005, PMG is the world’s most comprehensive third-party paper money grading and encapsulation service. PMG has established the industry’s highest standards of integrity, and the company’s dedication to consistent and accurate grading has helped PMG become the world’s largest, most trusted note grading service. To learn more, visit PMGnotes.com or call 877-PMG-5570.
Tags
Categories
Archive
Share this on:

that is a pretty cool note!

Very nice and thanks to the Dauer's for allowing them to be displayed.