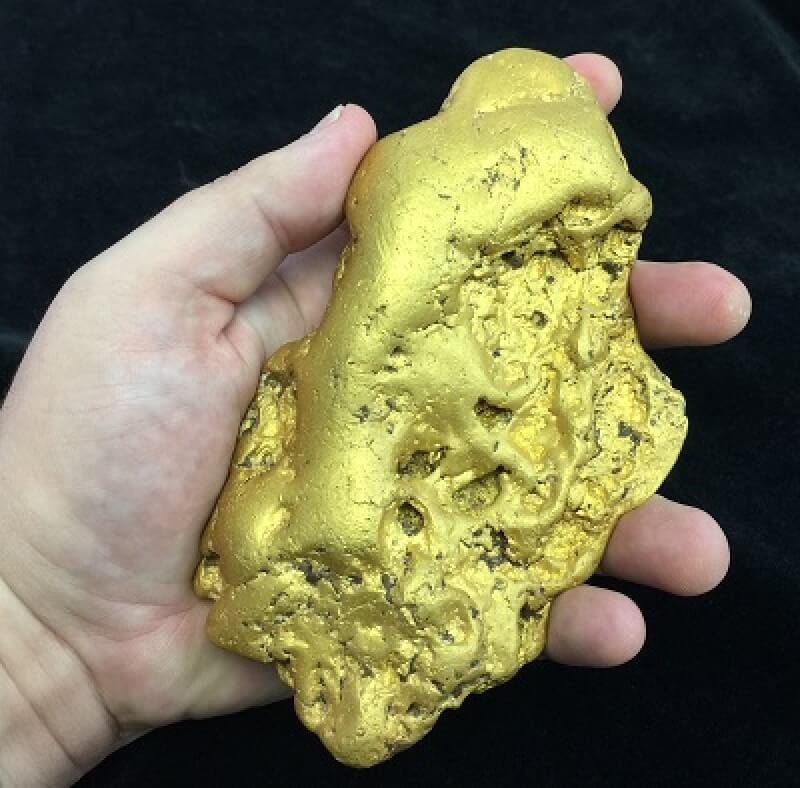 The Butte Nugget, with an estimated value of $450,000, will be marketed exclusively by Kagin’s, Inc.

SAN FRANCISCO - Oct. 21, 2014—Rare coin experts, Kagin’s Inc., today announced the discovery of one of the largest natural California gold nuggets ever seen. The treasure was found by a California man who was prospecting for gold on public land in Butte County, California in July of this year. The nugget, which weighs over 70-ounces, is estimated to be worth somewhere between $350,000 and $450,000.

“Large California nuggets are incredibly rare and valuable,” noted Donald Kagin Ph.D., president of Kagin’s Inc. of Tiburon, California, “in 2010, a man contacted us claiming to have discovered a 98-ounce nugget on his property also in northern California. After auctioning the piece for $460,000, we were made aware that it was actually found in Australia where such giant nuggets are more common. We immediately refunded the buyer, paid his agent a commission, resold the piece as an Australian specimen to the second highest bidder for a lesser amount, retained our commission and paid the original consignor (who wanted to use the nugget sale to sell his property) the balance. Everyone was satisfied with the outcome, and we are excited about another opportunity to offer such an historically important gold nugget.”

The Butte Nugget, as it is being called, is among the largest known California nuggets, and may be the biggest example from the Golden State in private hands.

After unearthing the treasure, the prospector contacted Kagin’s senior numismatist, David McCarthy, who evaluated the nugget and confirmed its provenance.

“Fortunately, the discoverer of the Butte Nugget photographed its excavation step by step. I was able to use his pictures to positively identify the location where the gold was discovered,” said McCarthy. “Nuggets like this don’t come along every day – I really didn’t believe that I would see a California nugget of this size unearthed during my lifetime.”

The Butte Nugget will be displayed at the San Francisco Fall Antiques Show, held at the Festival Pavilion at Fort Mason, from Thursday, October 23rd through Sunday, October 26th. The yearly event benefits Enterprise for High School Students (www.EHSS.org), a program that focuses on preparing high school students for success in future employment and higher education.

“This year’s San Francisco Fall Antiques Show’s theme is The Rush of Gold: Precious Metals in Art and Antiques,” said McCarthy, “I cannot imagine a better place and time to debut a California gold nugget of this magnitude.”

Kagin’s display will also include a group of incredibly rare coins minted during the California gold rush, as well as several gold pieces from the Saddle Ridge Hoard Treasure—the largest buried treasure fine in U.S. history. The 1,427 gold coins were discovered in 2013 by a couple walking their dog in California gold country. Kagin’s was also asked to conserve, market and sell that discovery (many on Amazon.com) now worth over $10 million.

Kagin’s, Inc. is the nation’s oldest family-owned numismatic firm tracing their origins to 1933. The firm specializes in U.S. gold coins especially those of the gold rushes, paper currency and classic rarities. Dr. Kagin holds the first B.A. degree in numismatics and the nation’s only Ph.D. in the field.

Enjoyed the article, but I respectfully suggest it would have been more appropriately posted under "News" rather than "Exonumia."

Love it! We had a 29ozt nugget back in the day that I thought was impressive ... http://instagram.com/p/ui9IPcCGDy/?modal=true

I may be biased but I wish the person or persons that dug up this nugget good luck in keeping much money from it's sale. California and the BLM aren't known for their generosity. I'm not familiar with the laws governing prospecting on public land so I hope I'm wrong and way off base. Great discovery and beautiful specimen!!

Gold is still out there to be found.