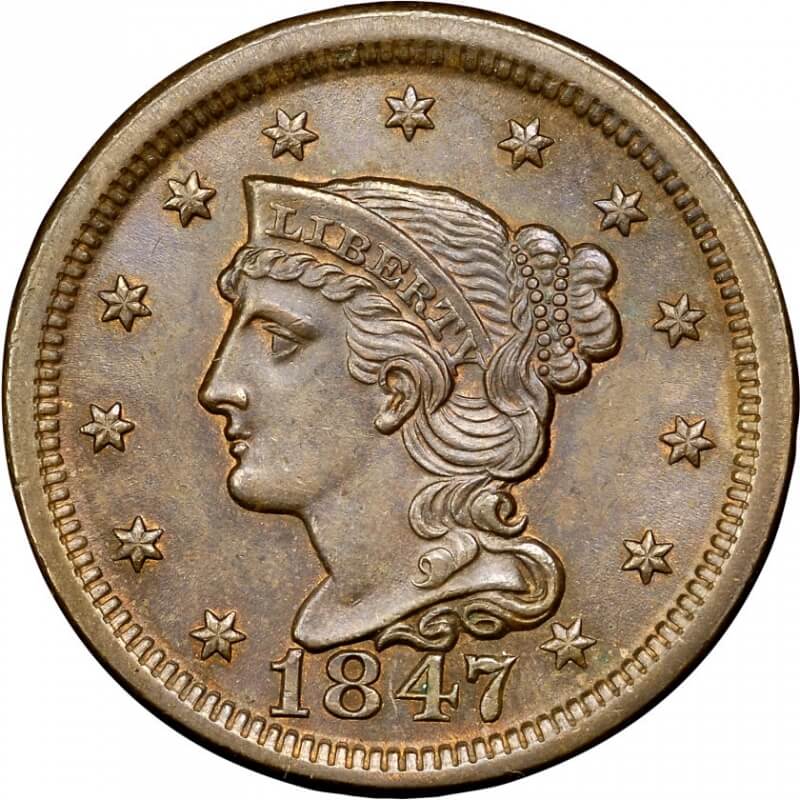 18 Dec 2014
**Every day this week we will highlight submissions from the My Coin's Story Young writing contest. Young Numismatists were asked to write a historical fiction story based on a favorite coin. The winners will be revealed on the blog on Friday, Dec. 19.
By Samuel Baldwin

My coin is an 1847 P Braided Hair Liberty Head Large Cent Piece. This coin is in F-12 grade with relatively sharp details. Despite obvious erosion from being buried underground, the penny is still intriguing. It has obviously seen a lot situations, from the ground to the case. I purchased it two years ago at Hallenbeck Coin Gallery, the coin store in downtown Colorado Springs, Colorado. While more serious collectors may shun the penny for its low grade, I find its history fascinating.

The story of this penny’s life begins along with 6,183,668 others in Philadelphia, Pennsylvania, during September of 1847. The mintage was not a puny number at the time, as most other dates were made in diminutive numbers. The batch of change which contained my coin was distributed to drug stores throughout Philadelphia. Since the stores had not received new change for a few months, the brilliant copper piece stood out among the other faded, dirty currency which had been passed from hand to hand and pocket to pocket. The boy who worked at one of these drugstores after school noticed the bag of new coins sitting upon the counter. When he took the coins out of the sack, he could not help noticing how brilliant and polished the new coins looked next to the old ones. After working his shift, he traded the new piece for an old one that had been his pocket and headed home. He admired the new coin and carried it with him for many years as a symbol of good luck. In fact, by the time he married, he still had the coin.

In 1861, during the rebellious outbreak of the American Civil War, the man volunteered to fight for the Union. After showing leadership and confidence during battle, he was promoted to commander of his battalion. Still carrying the penny from his childhood, he and his group advanced into the Battle of Lone Jack on August 15, 1862. Confident that he needed no reinforcements, the battle began. Although the North started the battle well, the situation quickly became worse. In an effort to retreat, the commander was shot, causing him to fall off his horse. Sadly, he died. After preserving the coin for fifteen years, it fell out of his pocket and to the ground as his body was being carried away. The coin remained on the battlefield, sinking into the earth during rain storms. It remained in the soil for thirty years.

One fresh spring day in 1892, a successful builder was coming out to a piece of property to take an appraisal. While walking across a field, he noticed a spot on the ground that was different color than the area surrounding it. Reaching down, he picked up an 1847 Liberty Head penny. He remembered back to when he was a child sitting on his bed looking through his family's money jar. While he was holding the coin, he also remembered how nice he thought the Liberty Head large cents felt in his hand. Smiling, the man took the coin home and gave it to his daughter. She put the penny in a box with other objects she saw as valuable. One day, when the girl was organizing her treasures, she accidentally took the penny as spending money. After selling some candy to the girl, the store owner took the coin. He noticed it was an old design and thought he could sell it for a little extra cash bonus. He sold it to a pawn shop for two dollars and left on his way.

The penny made its way through different boxes until it went into a storage room where it sat collecting dust. When the owner of the shop died in 1902 and the building was emptied, the coin ended up in the hands of a brilliant, young, prosperous coin collector. This collector had many valuable pieces, but also had a few coins which he kept for their sentimental value. The owner of the pawn shop had been his grandfather, so he decided to keep the dirty, eroded coin as a memory of his ancestor. For forty years, the man kept the old copper 1847 in his collection. His wise decisions with money and a sizable portion of his grandfather’s will kept him successful throughout the Great Depression of the 1930’s; his collection was able to live on. The Big Baby Boom of the 1950’s brought the man grandchildren as well as old age. Knowing that the end of his days was drawing near, he decided to pass his possessions to his loved ones. Similar to what happened over fifty years ago, the old man passed the ’47 along with some other coins to his feisty granddaughter.

Although the girl was interested in coin collecting for some time, the interest of collecting wore off.  She sold a tray of old pennies to a coin store owner, getting a little more money for the copper in the Braided Hair One Cent piece. Even though the owner of the store was rich for a few years, he became bankrupt due to squandering his profit on foolish things. By 1971, he was very poor, so he sold the last of his collection to an old antique shop in downtown Omaha, Nebraska. The 1847 penny sat in a case for a long time because nobody thought much of it. Eventually, after two years, a boy with fifteen dollars purchased it and went home. As his collection expanded in worth, he traded the penny for a new binder to hold his half dollars. The coin again sat for years on a shelf, looked over by successful collectors for of its low grade and obvious corrosion. By 1980, the coin had not yet been purchased. Finally, a man came into the store looking for a piece to start a collection. Flipping through a money magazine a week earlier had sparked an interest in coins. Spotting something he had never seen before, he picked up an 1847 Braided Hair Liberty Head Large Cent. He was surprised that nobody had bought it, because he thought it was great. The man, who spent $18, had started a collection. Intrigued by large cents, the man decided to make a complete Braided Hair Liberty Head set, starting with the 1847 P. When his collection of large cents became huge, he moved the lower grade coins to a tray in his attic. One day twenty-four years later, he pulled out that very tray of old cents with which he started his collection. Although the coins were special to him, he thought it was time to sell them.

By the time he sold the pennies in 2005, he had moved to Colorado. After trading the coins to Hallenbeck Coin Gallery, he left with a few nice Peace Dollars to begin another chapter in his collection. Once again, the coin sat in a case, not drawing much attention to itself. Seven years later, I walked in to Hallenbeck with my brother looking for a good deal. After finding out that I didn’t have enough money to buy the Peace Dollar I wanted, I started browsing the different cases. I stopped, noticing something I never knew existed. An 1847 P Braided Hair Liberty Head Large Cent Piece caught my attention. It was for sale at $22, but I only had $20 with me. My brother let me borrow two of his dollars, so I left the coin store with the penny in my hand. I plan to continue my Braided Hair set along with my other collections in the future. I will keep the dirty, old, historic ’47 as a reminder that a coin does not have to be worth a lot of money in order to be valuable. 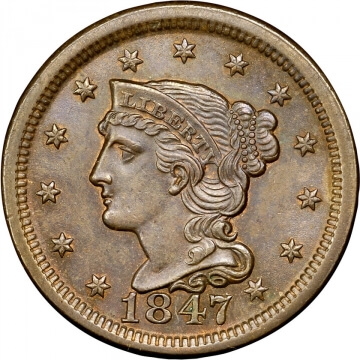 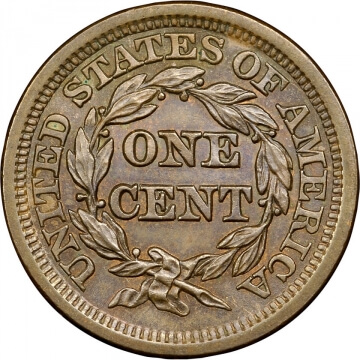 Great story but I have to say the coin is the winner.

Great story but I have to say the coin is the winner.

Good job Samuel! But that 1847 cent looks a little nicer than Fine Details. ;-)