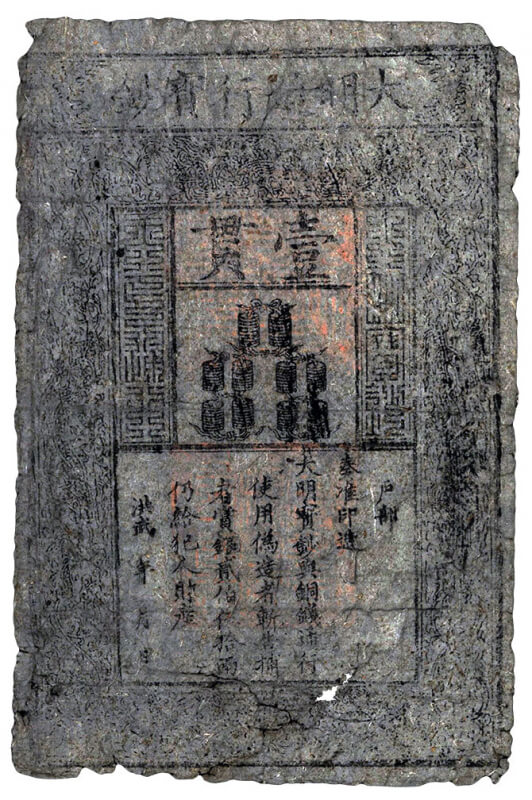 No civilization has contributed more to the development of numismatics than China; in fact, the word “cash” originally was used to describe bronze coins with square center holes used during the Tang Dynasty (A.D. 618-907). China’s most lasting innovation is paper money that was created in the 7th century. Western civilization didn’t begin to follow the lead on this practical concept until the 17th century.

The Chinese introduced “flying cash” during the Tang Dynasty in the form of privately issued paper bills of credit. Early in the Song Dynasty (960-1279 A.D.), circulating promissory notes were used to make up for a shortage of copper for coins. Paper money as we know it debuted during the Jin Dynasty (1115-1234), which issued “exchange certificates” without date limitations. The Mongol Yuan Dynasty (1206-1367) banned coinage altogether, relying on paper exclusively. This dependence on paper money was witnessed by Italian explorer Marco Polo, who first reported its widespread use, to the astonishment of the Western world.

The Edward C. Rochette Money Museum features an authentic 1,000-cash (1-kuan) note in its “History of Money” exhibit. The design consists of 10 strings of copper coins surrounded by geometric designs and Chinese characters. Each string is composed of 100 copper coins, representing the note’s value of 1,000 cash. Notes like the kuan were used for centuries alongside strings of copper coins and large silver ingots.

The Money Museum debuted a popular “Paper Money Extravaganza” exhibit in 1986. To celebrate the opening of the display’s international section, the ANA commissioned the production of a set of replica 1-kuan notes, which were produced by Thomas Leech of Colorado Springs, Colorado, and made of mulberry bark paper. The front design was photographically superimposed using authentic examples. The back, which would normally bear a red government seal and black stamp depicting 1 kuan, features a message from then-ANA curator Robert W. Hoge:

Wood blocks were used for printing the original Hung-Wu notes. The coarse dark paper itself was obtained from the inner bark of mulberry trees (extensively cultivated in the Orient as the habitat for silkworms), and evidently colored with carbon. Vermillion seal stamps of the Imperial Ming Treasury Administration guaranteed the paper for monetary use.

The top panel of the notes printed face bore a six-character title translating as “The Great Ming General Currency Precious Note.” Below this was a rectangular framework of dragons and arabesques surrounding two smaller panels. The upper of these was divided into four parts: at the top, the characters for “one Kuan;” to the right and left, seal script characters reading “Great Ming Precious Note” and “generally current under heaven;” between these, a political representation of the value of “one kuan” (1,000 copper “cash” bundled as ten strings of 100 coins each).

In the lower panel of the HungWu notes appeared a proclamation which may be translated as follows: “The Board of Revenue, by petitioned imperial sanction, has printed the Great Ming Precious Notes to circulate and function as copper coinage. Counterfeiters will be beheaded. Whoever is an informer will receive two hundred and fifty silver liang as a reward, and also the entire property of the counterfeiter. HungWu: __ year, __ month, __ day.” All the known specimens of the HungWu one kuan notes (thought to number something over one hundred) seem to be unissued “remainders,” which never received their validating dates and administrator’s signatures or seals. These rare Ming Dynasty treasures, and this souvenir facsimile, definitely serve as trenchant mementoes of civilization’s ongoing struggle with the evils of economic inflation.

An over-issuance of paper money created a problem that has been repeated many times since: hyperinflation. The Ming Dynasty discontinued the use of paper money in 1455, with initially disastrous results for trade. All paper notes were ordered to be destroyed, and authentic examples are scarce; a large bundle was discovered by foreign forces in Peking during the Boxer Rebellion in 1900. Only in the 19th century was paper money reintroduced as part of the Chinese currency system. 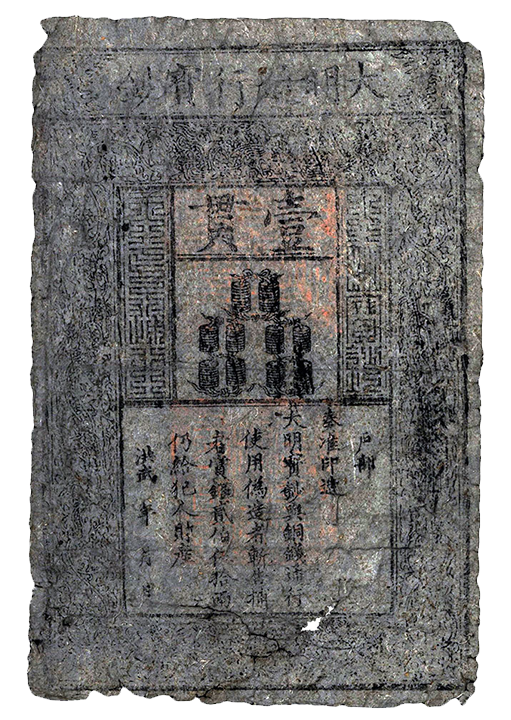 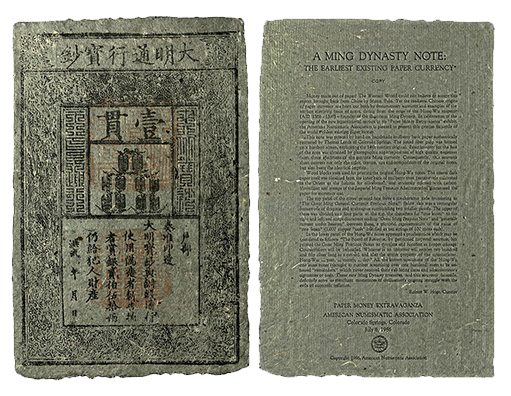 Terrific story. I must thank you or something that kept my attention. Thanks for your time and effort. Mike.