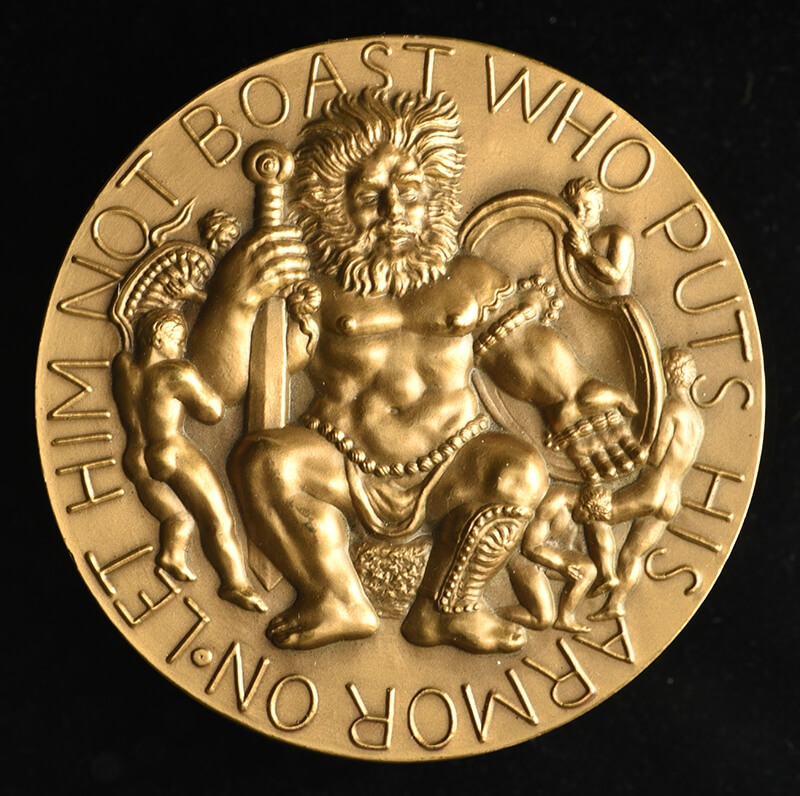 17 Sep 2015
By Andy Dickes
The Edward C. Rochette Money Museum boasts an impressive collection of medallic art from around the world, and an impressive part is a complete set of the Society of Medalists. Produced between 1930 and 1995 and including 139 total medals, this series represents the United States' most successful art medal society.  The list of those commissioned to design the medals is a who's who of prolific 20th-century medallic artists, including United States coin designers Laura Gardin Fraser, Hermon A. MacNeil, John Flanagan, Anthony de Francisci, Robert I. Aitken, Adolph Weinman and James Earle Fraser.
The Society of Medalists was founded in 1929 by and Clyde Curlee Trees, owner of the Medallic Art Company (then in New York), and George Dupont Pratt. The society viewed itself as the successor to the Circle of Friends of the Medallion (1908-1915), one of the first attempts to promote Medallic art in the U.S. The Medallic Art Company produced all of the 134 regular issue medals (generally two were released per year), all in bronze except for two World War II issues made in silver. Special anniversary issues and restrikes were also produced.
Only four artists designed more than one medal, ensuring that a wide range of styles and subject matter were presented. Medal #1, Laura Gardin Fraser's Hunter, Ruffed Goose, was featured in the August 1930 The Numismatist, along with information about the new society. Mintage numbers ranged from 3,200 for medal #1 to 600-800 for many later issues. The ANA's collection in thanks in large part to substantial donations by the Medallic Art Company and legendary numismatist John J. Ford.
I am a part of another important if more unserious society: the Society of Bearded Numismatists. While working on the ANA’s medal collection, I noticed a random and impressive feature of the Society of Medalists collection: its wealth of robust beards. An incomplete selection of these wonderful whiskered medals is featured here.
#2: Hail to Dionysus, by Paul Manship, 1930
Dionysus is the Greek god of wine, along with fertility, theater and more. Although prohibition had become somewhat unpopular by 1930, the medal still created some controversy. The obverse features the god with the legend: HAIL-TO-DIONYSUS-WHO-FIRST-DISCOVERED-/-THE-MAGIC-OF-THE-GRAPE. The reverse features two satyrs trampling grapes.
#54: Walt Whitman, Leaves of Grass Centennial, by Paul Fjelde, 1956
Walt Whitman is known for his ample beard as well as his beautiful poetry. This medal was designed in honor of the 100th anniversary of his masterpiece, Leaves of Grass; the obverse legend reads: OUT OF THE CRADLE ENDLESSLY ROCKING/-1819-WALT-WHITMAN-1892. The reverse features a singing thrush, blossoms, and a legend celebrating the publication.
#64: David and Goliath, by Nathanial Choate, 1961
In this allegorical medal for war and humanity, a famous Old Testament battle is commemorated with the mighty Goliath on the obverse; the legends on both sides quote Henry Wadsworth Longfellow’s poem “Morituri Salutamus”: LET HIM NOT BOAST WHO PUTS THE ARMOR ON. The reverse featured a victorious David and the severed head of Goliath with the legend: AS HE WHO PUTS IT OFF, THE BATTLE WON.
#69: Honor to Socrates, by Robert A. Weinman, 1964
This rectangular medal honors the human thirst for philosophic knowledge, and features the bearded Socrates and a legend listing many other pioneers. The reverse depicts a man holding high a lamp of knowledge (much like the ANA seal) fending off shadowy figures, with the legend: IN-UNDERSTANDING’S-LIGHT-/THE SPECTERS-DIE.   Weinman also designed #87 in the series, Cat and Mouse, in 1987. His father Adolph Weinman designed #39 in this series (Genesis -- Web of Destiny, 1949), as well as the Walking Liberty half dollar and the Mercury dime.
#79: American Folklore, by Bruno Mankowski, 1969
This medal features two bearded American icons: the fictional, larger-than-life lumberjack Paul Bunyan; and the real yet romanticized folk hero Johnny Appleseed (John Chapman). Bunyan is depicted on the obverse with his ax among timbers and with his trusted companion, Babe the Blue Ox. On the reverse, Johnny Appleseed carries a planting tool while planting seeds next to an apple tree.
*The official name of each of the society’s medals appears in edge lettering and reads “THE SOCIETY OF MEDALISTS <medal number> ISSUE.”
To learn more about the Society of Medalists and its issues, visit http://medallicartcollector.com/som_background.html, or check out the reference books The Society of Medalists and American Art Medals, 1909-1995 by noted expert and 2013 ANA Numismatist of the Year David Alexander from the ANA library.
Tags
Categories
Archive
Share this on: 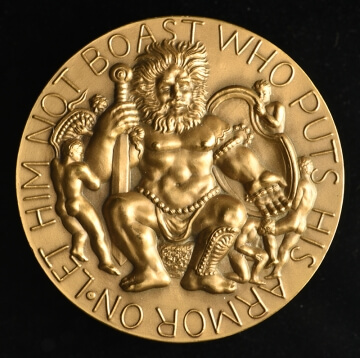 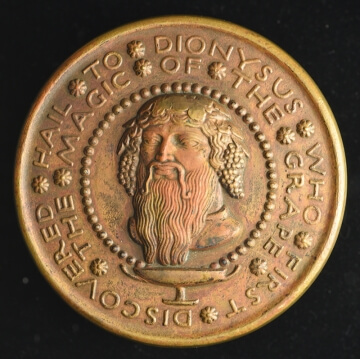 I love medals. You would think I would own a hundred by now. The problem I no one sell them. The one in the picture is a classic. Is there a company that sell just medals or lot of Kerala. I would love to know. I like old medals.

Thank you for this overiew. The Society of Medalists represents a fascinating collection of art and history. I have begun collecting this series, starting with the 1964 medal of Socrates by Robert Weinman. More to come. I would underscore the value of David T. Alexander's book, "American Art Medals, 1909-1995."

Great article. It takes numismatics to a whole different and artistic area!

Nice article. I'll be checking out their web site. Thanks Andy!!

thanks Andy, was there some later link between the society of medalists and the Franklin mint

Very informative and enjoyable to read.

Oh yeah, I think I heard of the SOM somewhere!