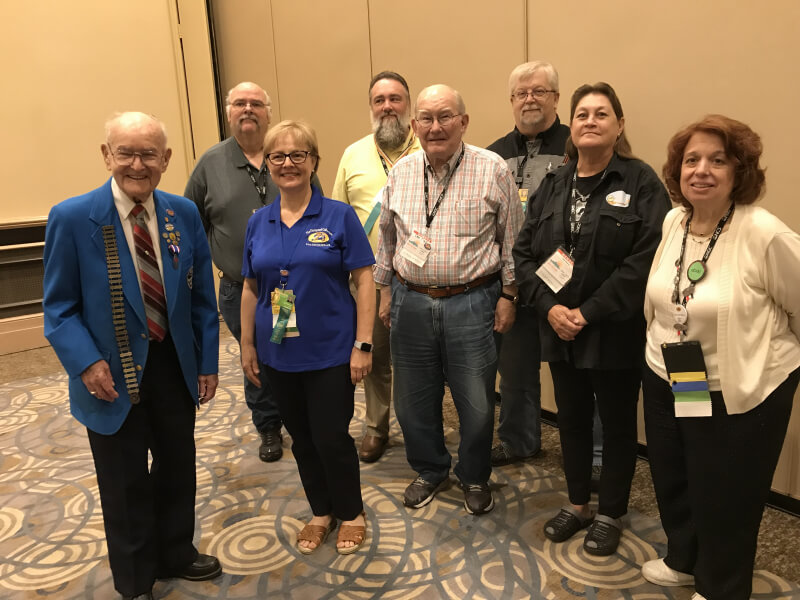 The American Numismatic Association World’s Fair of Money Convention (WFOM) was held for the 14th time in Chicago, Illinois, on August 13 – 17, 2019. The actual site was the Donald E. Stephens Convention Center in Rosemont, Illinois which is very close to Chicago O’Hare airport. We have been writing about major conventions for a long time, and this one had to be near the top of all that we have ever attended. In grading terms this was an MS 70 convention which saw a convention drawing in 7,000 visitors, which included the ANA staff, volunteers and exhibitors. One-thousand dealers were also registered (including early birds), and 1,000 tables were setup in the very large convention center. We have attended and wrote about many national conventions for well over a decade and this has to be one of the busiest conventions we have ever attended and even with the admission charge for non-members (discount coupons were available at the ANA web page). When the doors opened on Tuesday, several hundred people were waiting in a line to get into the show. The registration lines were also very busy to get a wrist band to get into the show. After the doors opened, public traffic was busy for the entire run of the convention. If you attend any ANA convention for two days, it pays to be an ANA member, and the cost for adults (18 and over) is only $28 for an online membership. Visit www.money.org for information on membership. It is too bad that a lot of the people waiting in line could have entered the convention a half hour early as a benefit of ANA membership. Everyone who registered received the official “Show Guide” which contained 88 pages, along with a well-done cloth bag which was sponsored by eBay and CDN Publishing.

A big thanks to the ANA Staff headed by Executive Director Kim Kiick, who along with Convention Director Jennifer Ackerman; the ANA Board of Governors and their President Gary Adkins; the Chicago Coin Club (www.chicagocoinclub.org) celebrating its 100th year along with the Host Chair Richard Lipman and their hard-working committee, and lastly the ANA National Volunteers who work in various areas of the show supplementing the ANA staff in key locations. Here are some of the highlights of this WFOM Convention. Like all the WFOM Conventions we have attended over the years, this one had many conflicts that caused us to miss some of the events that were going on. Along with Sandy Hill we worked at the Future Convention table, which was located close to the entrance. The show wouldn’t be very successful if it didn’t have the title sponsors, patrons and advertisers who contribute financially to the success of the show. They deserve a big thank you for their donations to the convention. With the same thoughts for donations to ANA the Philanthropy Award(s) went to Chester L. Krause (1923-2016), David Sundman and Anthony Terranova. Thanks for all your many past and continued contributions to the ANA. The ANA bottom line is also helped by the dealers who take tables, followed by the early birds who pay to get in early.

Two auction houses, StacksBowers (www.stacksbowers.com) and Heritage Auctions (www.ha.com) held multiple sales during the convention and after the convention. Tens of thousands of lots crossed the auction block. These major auction houses bring in probably 100 staff members that used a lot of room nights at the hotel(s). They also help with food and beveridge purchases at the convention center. These are important if the ANA is going to be held in major cities like Chicago. Heritage reported their coin sale realized over 32 million dollars in sales. The fees paid to the ANA by the two firms help to pay for the convention itself and also the bottom line for operations during the year in Colorado Springs, CO.

It has been proven over the years that the Rosemont site is a great venue for the ANA. The Donald E. Stephens Convention Center is a world class building with many nearby hotels, restaurants and reasonable parking one block away. The show also had great advertising and once again thank you Donn Pearlman for all you do to get the word out in the local and national media (radio, TV and newspapers). Message Centers are always important, and the Association always has one in an easy to get to area and in this case right inside the front door. Thanks also to Coin World, CDN Publishing, CoinWeek.com and Lighthouse Publications, Inc. for having a table. Kudos also to Positive Protection Inc. (www.ppius.com), Robert Brueggeman and Kenneth Mullins for keeping the convention safe. All the major grading services also had tables including the ANA official service which is Numismatic Guarantee Corporation (www.ngccoin.com). It was great to see several book and literature dealers who also had tables including the ANA official service, Whitman Publishing Company (www.whitman.com). A huge thanks to the United States Treasury Department and the Mint Director David J. Ryder for his participation, along with the United States Mint, and Bureau of Engraving and Printing including their famed Spider Press and special drawings for the 50 pulled proofs along with other cards produced for this show. Thanks also to the Royal Canadian Mint President and CEO Marie Lemay for her participation, along with The Royal Canadian Mint. The other mints attending was, The Austrian Mint, Bermuda Monetary Authority, China Gold Coin Incorporation, Germania Mint, The Holy Land Mint, Panda America / Panda SG, Pobjoy Mint and the Royal Australian Mint. Thanks also to Federal Express for participating.

The ANA Museum Showcase featured the famous (ex Bebee) 1913 Liberty Head Nickel, along with the 1804 Draped Bust Dollar and other rarities. The Maynard Sundman/Littleton Coin Company Lecture Series is always a big part of the ANA Conventions. The Legacy Series featured Kenneth Bressett and Jeff Garrett. Money Talks (educational programs) also saw several numismatists give presentations during the convention. Collector Exhibits also had some outstanding displays and the Best in Show Award went to a five-case exhibit titled, Virtus and Victoria: Coins Relating to the Severan War Against the Tribes of Caledonia. The convention medal prepared for the show featured Abraham Lincoln. It is always nice to see The Elongated Collectors (www.tecnews.org) had a meeting, auction and the attached photo depicts the newly elected Board: Ray Dillard, TEC President Emeritus who performed the Installation of Officers, Cindy Calhoun – President, Dee Drell – Governor, Uni Marbutt – Governor, Terri Ventresca – Secretary, Back row: Bob Frazier – Governor, Tyler Tyson - Vice President and James Motley -Treasurer. Cindy Calhoun had her rolling machine at the convention, and they gave away not only the official elongate made for the show but many others. Several major ANA coin clubs had tables at the show along with some of them having educational programs. One of the club members we spoke to sold 27 tables for an upcoming show. The Kids Zone & Treasure Trivia is always popular, though this time the future convention table wasn’t part of the stops. A scout seminar was also held. Coin publication booths were also part of the show. The event was also covered by Coin Television (www.cointelevision.com) and Coin Week (www.coinweek.com). It is always nice to see Abraham Lincoln and Benjamin Franklin at the convention. The actors who portray them do a wonderful job. Their booth was located right at the entrance and proved to be very popular with the many visitors who stopped by to chat and have photos taken. One of the only problems we saw was the food service provided by the convention center left a lot to be desired. Lines were long at the Starbucks located outside the entrance and many complained of the wait. The other one was located way on the left and was way too far away from the other side of the hall. We hope that when the ANA returns to Rosemont in 2021 that can be fixed.

Many groups hold dinners after the show closes. Gibson’s, directly across from the convention center is very popular and held two events we attended. On Monday night PNG held their banquet there which was excellent. Many awards were given out including the Abe Kosoff Award. Attached photo shows at center the recipient Paul Nuggett, on left John Brush and on right Bob Brueggeman. The Chicago Coin Club held their 100th Anniversary Banquet which was oversold and all who attended received an overprinted Red Book. A special medal was also given to the attendees along with other items. Like the PNG Banquet the food was outstanding. Wednesday night the Tokens and Medal Society (www.tokenandmedal.org) held their awards banquet at a nearby restaurant. Like the other two it was a very nice evening with good food. The Numismatic Literary Guild - NLG (www.nlgonline.org) awards ceremony/luncheon, according to their Secretary Ron Guth, proved to be very popular with many awards presented at the event. The Collectors of Numismatic Error Collectors of America - CONECA – www.conecaonline.org) held their banquet on Thursday night at the same location as TAMS. Although we didn’t attend, we heard everything went well and the food was great. The numismatic friends of Sherlock Holmes hosted by the Fourth Garrideb also held a dinner on Thursday night, and we are sure other groups, organizations, societies, mints and others also held dinners during the convention.

The ANA Banquet held their 128th Anniversary Banquet, Silent Auction & Officer installation on Friday night. Awards were also presented and here are some of them. Photos of the following are attached: The Lifetime Achievement Award went to longtime literature dealer George F. Kolbe who received the award from ANA Executive Director Kim Kiick. The Farran Zerbe Memorial Award was presented to Thomas G. Hallenbeck on left. It was presented by Michael Fuljenz who sponsors the award. Arthur M. Fitts lll was inducted into the ANA Hall of Fame and President Gary Adkins is on right. The new ANA board of Governors was sworn in by H. Robert Campbell (at lectern). From left, Michael Ellis (partially obstructed, Muriel Eymery, Mary Lynn Garrett, Greg Lyon, Clifford Mishler, Paul Montgomery, Shanna Schmidt, Dr. Ralph Ross and Colonel Steven K. Ellsworth (61st President of the ANA).

Thanks ANA Board, along with the Association Staff, the host club and their committee, along with the ANA volunteers for hosting or helping to make this convention very successful. Just about every dealer we spoke to said they had a very successful show, or one of the best they ever had. We look forward to the next two ANA Conventions, the National Money Show in Atlanta, GA (Cobb Galleria Center) on February 27-29, 2020; followed by the World’s Fair of Money at the David Lawrence Convention Center located in Pittsburgh, PA. on August 4-8, 2020.

Yours in Numismatics, John and Nancy Wilson, ANA National Volunteers 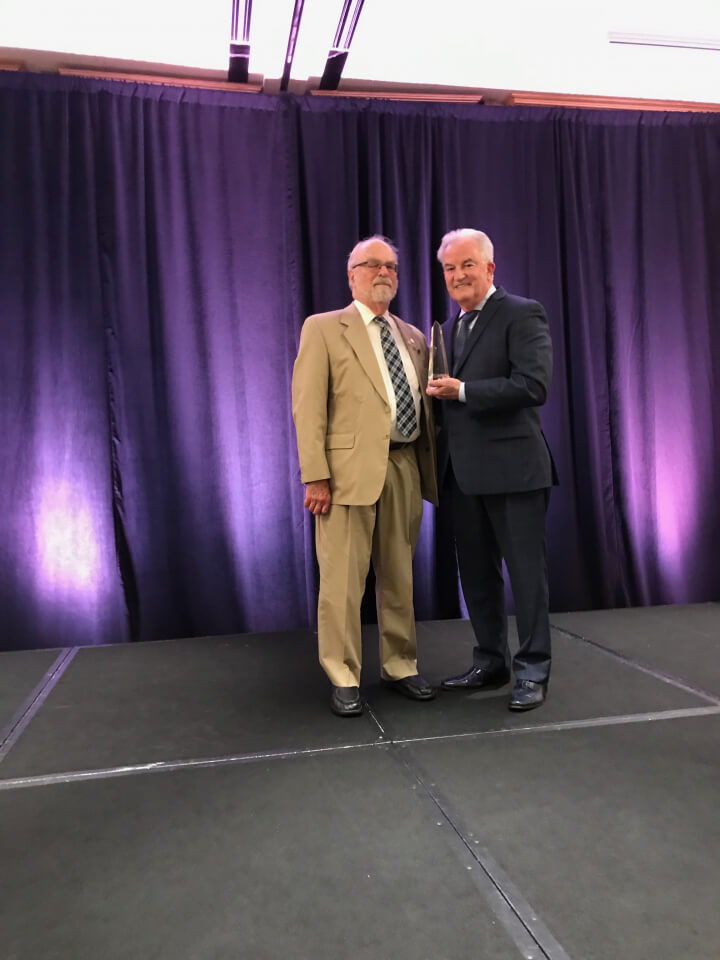 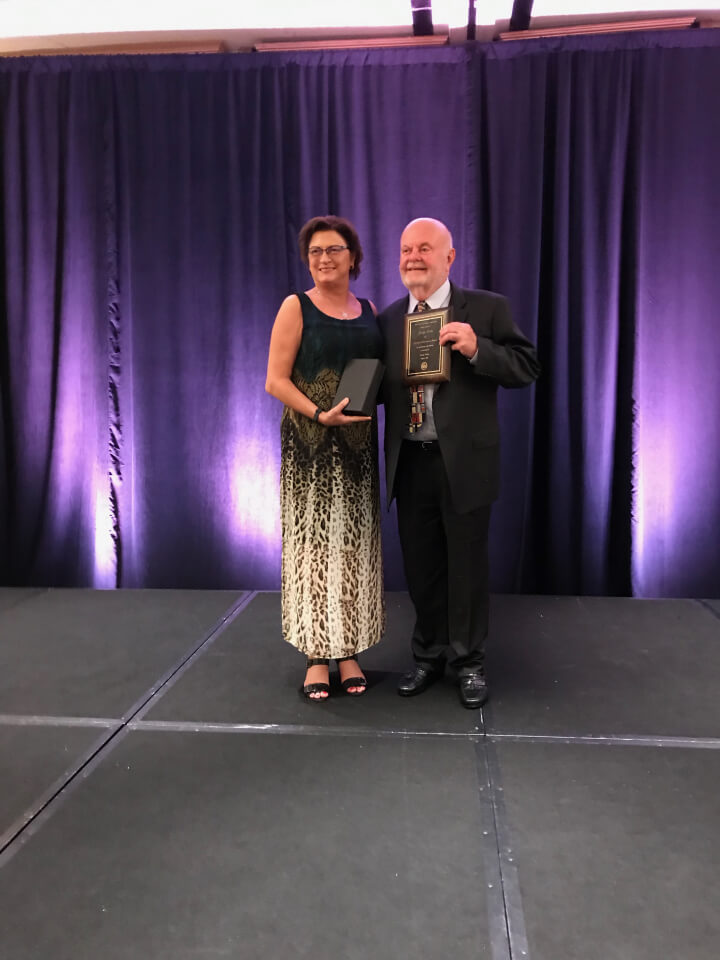 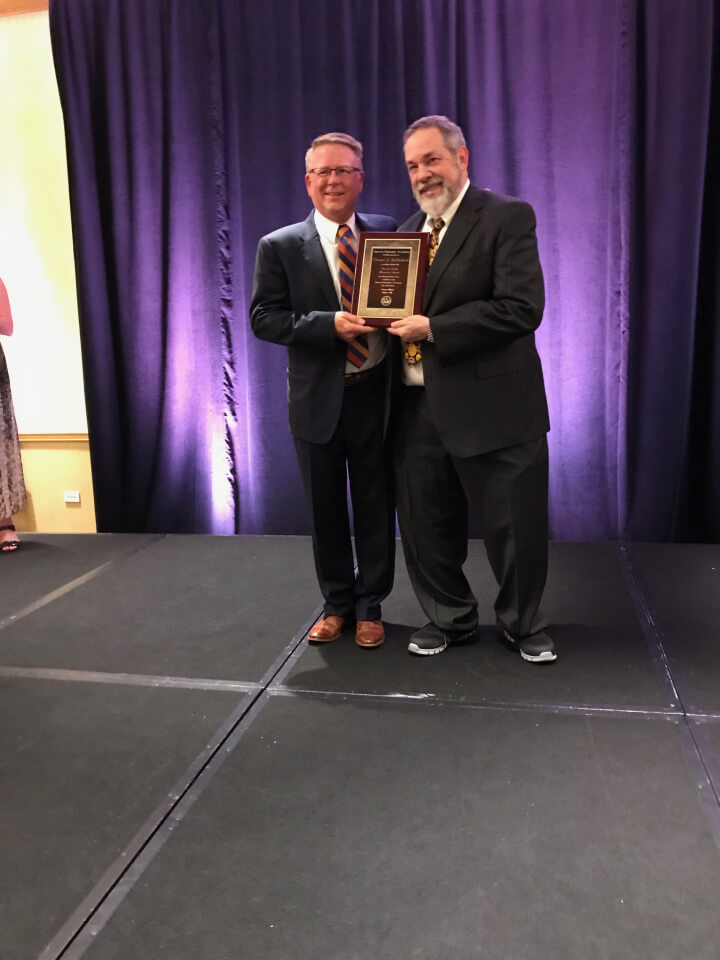 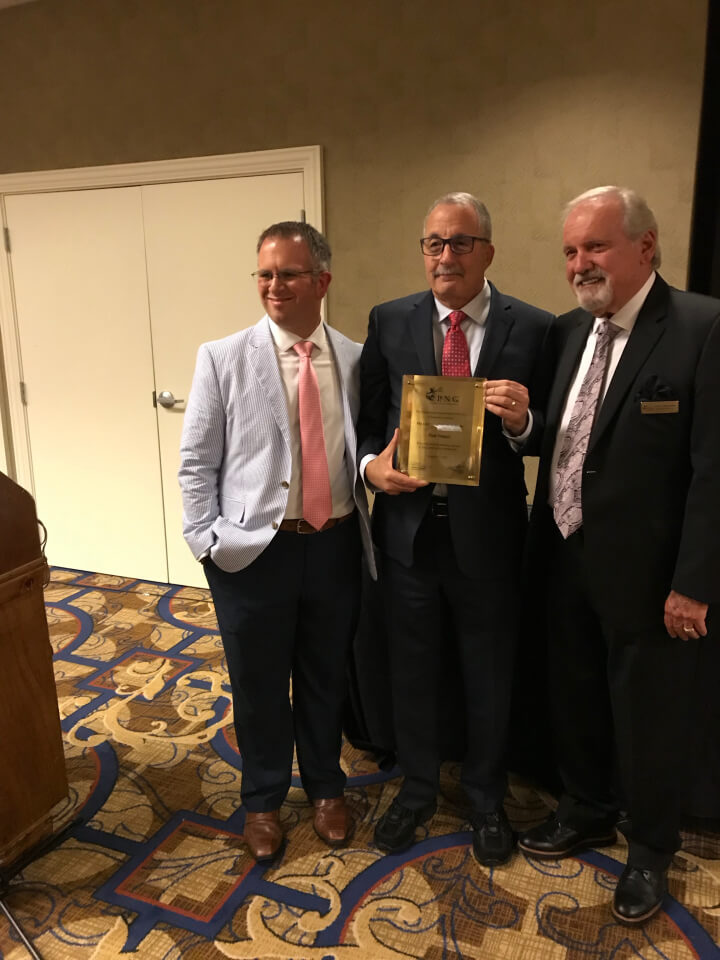 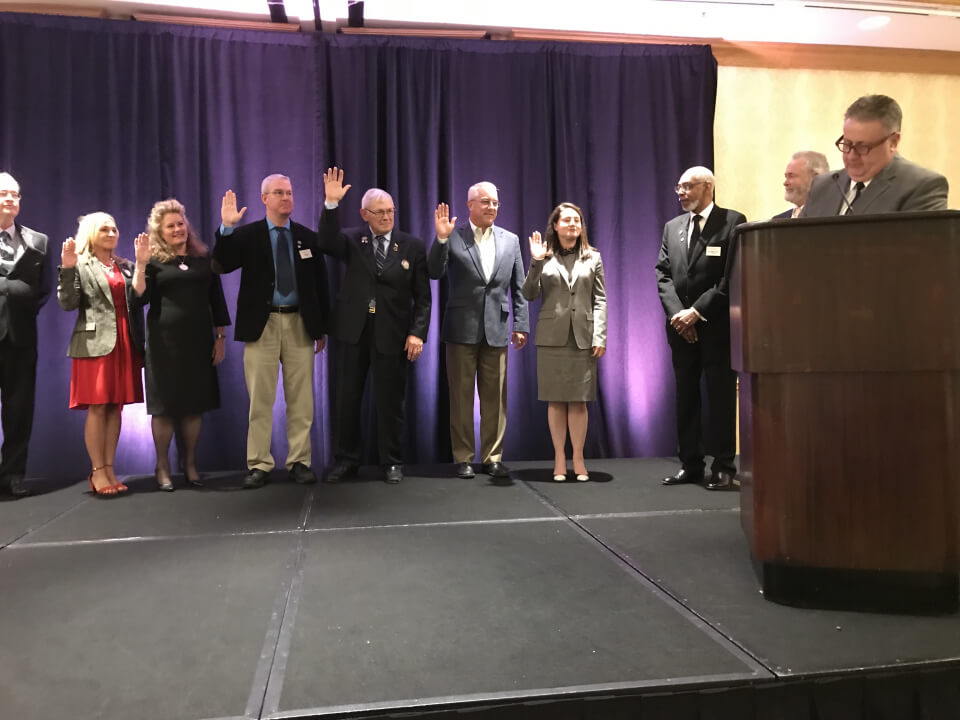