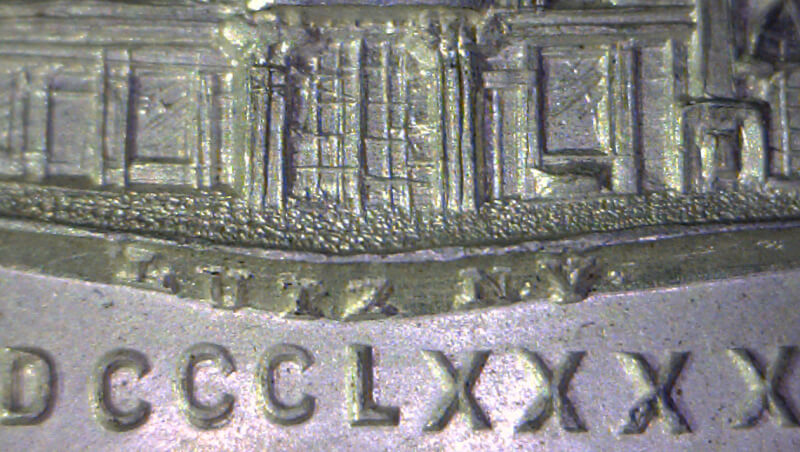 26 Feb 2019
I posted the story of acquiring the Hinchliffe Bros. brewery store card in an earlier blog entry. As I noted, I was attracted to the lettering style on the obverse. When I spotted a similar, albeit smaller, store card on Ebay, I had to have it.  Both tokens were dated 1891, the brewery token from New Jersey and the concert hall token from New York. I am not going to go into detail about the concert hall token, courtesy Carl Richter, except to say it is listed in Rulau and I do not believe it is particularly rare.
My first task was to confirm my belief they were engraved by the same hand. The fancy Cs in Compliments had caught my eye. Look closely at the image pairing the two Cs, the New York piece on the top and the New Jersey piece on the bottom. The letters are different sizes because the tokens are different sizes, the New York piece being slightly smaller. In my opinion, they were engraved by the same hand. The dots and the central spike are virtually the same.
In the fourth image, note the serifs in Rich. They were added after the letter was engraved. Now look at the fifth image. The letters in Paterson are engraved in a different style, but the serifs are added using the same stroke after the letter was engraved.
Now examine the close up of the signature "LUTZ N.Y." at the base of the concert hall on the New York piece. There is no signature on the New Jersey brewery store card, but they were clearly engraved by the same hand.
So who is Lutz? One can quickly find William F. Lutz in any basic search. He worked for others engraving dies for Civil War tokens in Cincinnati, Baltimore, and later moved to Washington D.C. Lutz never lived in New York. But, he did train his son, William F. Lutz, Jr. to be an engraver and he worked alongside his father in Washington. A few years after being trained, he appears in New York directories listed as a engraver of badges. His name appears associated with badges and as Lutz & Spaeth, N.Y. on other badges. But it does not appear he ever became a household name as an engraver.
By 1905 he appears as a manager for a butcher company and is listed as a salesman for a butcher in the 1910 census. Maybe he was tired of trying to make a living as an engraver, maybe he failed, maybe he just moved on to another occupation.
Regardless of the reason why he left the profession, careful examination of two similar store cards led me to identify the engraver of the medal that caught my attention at FUN in January. Although unsigned, the engraving style on the Hinchcliffe store card is clearly the same a that on the concert hall store card. Now to look for other pieces that Lutz, Jr. might have engraved.
An interesting margin note, Lutz, Jr. patented a door alarm in 1891. He is someone I want to learn more about.

Loved the detailed photos. Impressive collection and background. Thanks

Beautiful tokens! Loved the blog! Thanks for your research.

That is a cool token.Too bad it was holed.

I like your passion for the research on this token. Nice blog.

Nice eye. beautifully done tokens. Thanks for the history..

That's Mr. Bowers. His Civil War Books are just as good like I learned here today I always pick something up on my CW.T. The man has an eye for detail as you do. Maybe that's why I like them so much. I have looked at the same token three times and picked up three different things .These are beautiful and made the same way that's a credit to your eyes. Thanks. Mike

He had a beautiful eye and hand, those are excellent. I love the design. Thanks for the info, you never know what you will find with some research.

Beautiful token. So many unsung heroes in numismatics. Thanks for telling me abt the Bowers bk.

Nice medal. You can find a short biography on Mr. Lutz in the new Q. David Bowers book "Engravers, Minters, and Distributors of Civil War Tokens".

Yes, that is Lutz, Sr. in the Bowers book.

That is a very attractive pair of tokens and wonderful research, to boot. Thank you for sharing this. I love that style of lettering too.