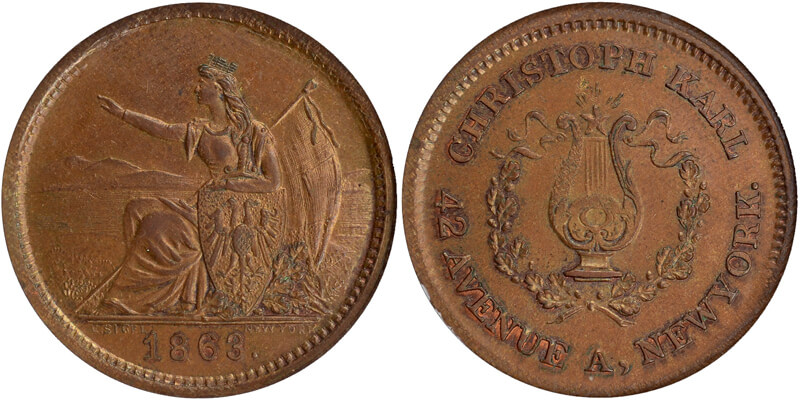 Have you ever looked at the shield on many of our 19th and 20th century coins and wondered what the lines across the top horizontal bar of our national shield represent? How about the lines on the vertical bars? Beyond the vertical bars representing the 13 original states holding up the single bar representing the federal government you may be surprised to find that the lines or the lack thereof on the bars are defined by certain colors in heraldry called tinctures.

In my NGC seated imagery custom set, I have an MS-64 NY 1863 NEW YORK F-630AM-1a CHRISTOPH KARL token featuring a seated image of Germania. The image on the obverse of this token has been incorrectly identified by some as “Liberty”. However, by applying tincture in both the flag and the shield the seated image is clearly not Miss Liberty but in fact Germania. Apart from the tincture, Germania is wearing a mural crown. In the 19th century mural crowns were used primarily in Europe to represent republics or in the case of this token the German Confederation.

For a detailed write-up about my token click the following link:

Below is the credit for the use of the tincture graphic:

Most of my coins are too worn for me to notice this. But I did see this on my barber half dollar. Thanks for the information!

Never knew that. Thanks!

Beautiful Token! Really learned a lot from your blog! Enjoyed it. Thanks!

I learned quite a bit from you today. Thanks for all the research info.

I knew the lines represented colors but I have never pursued this to learn the whole story. You have enlightened me and saved me effort. I am going to print this out and save it. Thank You Gary!!!

Very well done. Many collectors learned something. All in the details

To say I learned something is an understatement. Excelent. I always made sure there was no dirt between the lines. That takes away so much from the coin. It makes it look like there are no lines whatsoever never mind the colors such I did not know about. Great coin by the way. These colors by the way are not visible with the human eye or a loop. How.strong wood the magnification have to be.

Some interesting stuff I never would have thought to ask. Thanks for writing, I will be sure to check this out.

Thanks for the blog. It was very educational. It help explains designs on coins and tokens.