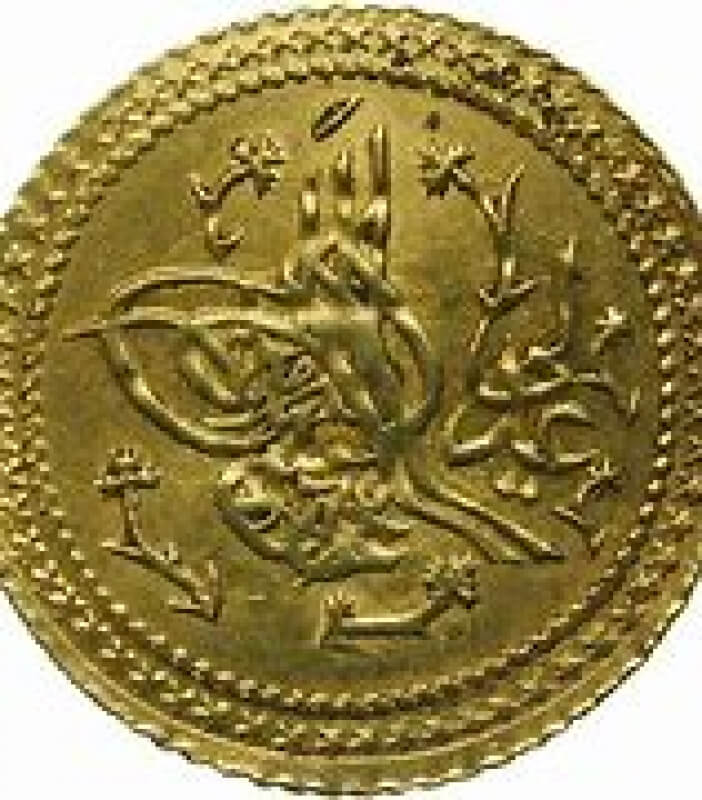 A story before I begin: I was writing this earlier this week. I was chilling on the couch and watching the Bayern Munich game, feet up on the ottoman. My brother asked me what I was doing. I told him I was watching soccer. He then asked me what I was really doing. I told him that I was writing about the coins of the Ottoman Empire. He told me that the Ottoman Empire invented the ottoman and producing ottomans was their main industry. I told him that he didn't know what he was talking about and then asked him questions about the empire. He said, "I don't know" to all of them and walked away. It turns out that he was half right: ottomans originally came from the Ottoman Empire! They were traded around Europe, being exchanged for coins or other types of currency, mostly from the German States, France, and the Italian States. Anyway, that's a fun little fact about the Ottoman Empire before I get started.

The Ottoman Empire was arguably one of the greatest in history. It lasted for over 600 years. At its extent, it stretched from Cairo to Istanbul to the gates of Vienna, almost 6% of the world's land. It is on the list of the top largest empires in the world and its military, especially the Janissaries and the Great Turkish Bombards, was second to none. Its golden age under sultans Mehmed the Conqueror and Suleiman the Magnificent brought some of the greatest advancements in the world and brought the Ottomans onto the world stage. The empire conquered Constantinople in 1453 and renamed it Istanbul. The Ottoman Empire fell in 1922 after allying with Germany in WWI. One of their major advancements was in coins. The Ottomans changed Middle Eastern and Eastern European coins forever with their advancements in minting technology and coin design. This is what you will learn about today.

Before I explain the imagery and significance of the Ottoman coins, I should tell you about the history of Ottoman coins and the different monetary systems, just like I do with my German States blogs. The Ottomans used four monetary systems. Their first monetary system was the Altin. Very little is known about it, and I could not find a direct system to put here. The Ottomans started using the AkĂ§e in 1327. More is known about this system, like some of the denomination names, but there is not a complete system to put here. They used that until 1688, when they switched to the KuruĹź. We know how this system works: 3 AkĂ§e to 1 Para | 40 Para to 1 KuruĹź. In 1844, the Ottomans switched to a system called the Ottoman Lira, a strange decimal-like system with an extra denomination: 40 Para to 100 KuruĹź to 1 Lira. They used this until their downfall in 1922.

Ottoman coins have a lot of symbolism and meaning. Islamic symbols are very prominent on Ottoman coins. Writing in both Arabic and Turkish is widely used on Ottoman coins. Out of all of the symbols on Ottoman coins, I was surprised by only two things: First, there were no faces. Second was a symbol called the tughra. Each Ottoman ruler had a tughra, which is a symbol of that particular sultan, used kind of like a signature or a way to represent said sultan. They all look similar, but they are different enough to distinguish which sultan had which tughra. We can know about how old an Ottoman coin is by looking at the tughra and determining which sultan it belongs to. (there's a tughra on the coin in the picture. If anyone can identify it, please tell me in the comments)

The Ottoman Wreck is not something I am going to write at length about here, but it is worth mentioning. It was an Ottoman ship that was going to Japan in the 1800s carrying gifts and trade items, including a collection of Ottoman coins. It encountered a typhoon and sank. The coins were recently recovered and put in the Turkish Museum in Japan. It is one of the most significant shipwrecks in Ottoman history and the one that gave us the most clues about Ottoman coins.

Thanks for reading, and see you in the next one!

Wonderful coin, it carries the travels of time with it. As the Ottoman Empire spread its grasp of power throughout many lands beyond Turkey, its coinage has been appearing in even Venice and Florence since the "Emirs" and merchants from the Empire took to the Mediteranean Sea to establish commercial ties with Greeks, Italians and further into Spain and Northern Africa. Most coinage was even adopted by lands visited by the Ottoman representatives, as well as language expressions, cultural and folkloric ideology. Thru Ottoman coinage and as pointed by "islamic principles" design simplicity was required and exercised. Again, thanks for sharing your collected item.

None of these coins in my blogs are from my collection. I know people that have these types of coins and I get blog pictures from them.

Thanks for such an interesting blog! Enjoyed the Ottoman history! ; )

Your brother has a fantastic sense of humor! Much like something I would have told you... Lol! Given what's going on in the U. S economy. I'd say nothing is really different between the dynamics of the Ottomans' economic system and ours today. In fact I would posit that those dynamics are immutable laws of economics.