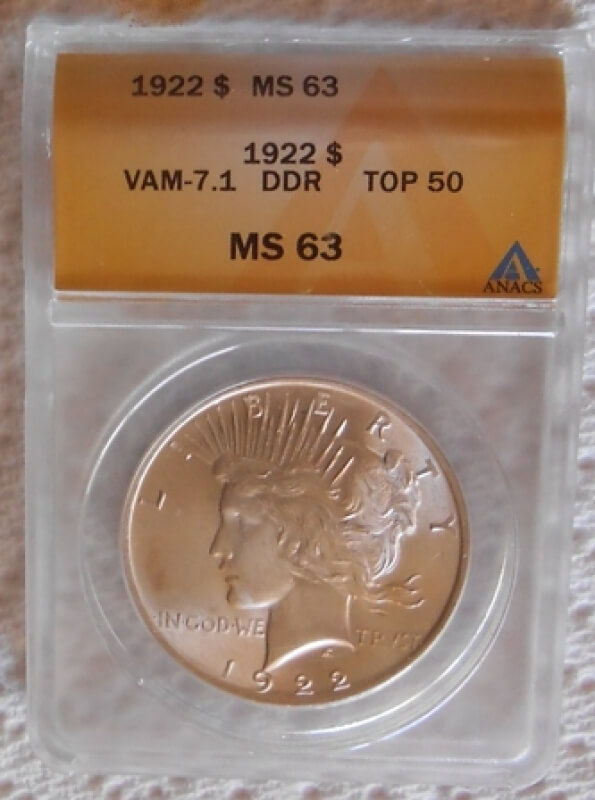 13 Oct 2017
This coin features two of my favorite things: Peace Dollars and VAM's. This particular VAM is in the Top 50. That is simply a list of 50 Peace Dollar varieties that are worth collecting and create a worthwhile set to acquire and own. It helps collectors of Peace Dollar varieties focus. The 1922 Peace Dollar has a mintage of 51,737,000. This makes it one of the most common. There is also a 1922 High-Relief and Satin Finish but they are so rare as to be non-existent for a normal collector. Anthony de Francisci  was the designer with his wife Theresa posing as Miss Liberty. My coin is a MS-63. Graded by ANACS, which is probably the most common TPG for VAM's as they do the varieties the other graders will not. This VAM is a 7.1 which means , on the reverse, there is strong doubling on the eagle's right wing edge down the leg  with slight doubling of the right leg. There is also fine diagonal polish lines above TRV on the obverse. These facts mean it was minted with the earliest die state, Die State 1. There is a bit of toning starting to appear on both sides of this coin. This VAM was discovered in 1993 by Joseph Feld. Anyone can discover a new VAM variety. Keep looking and send it into the people at Vamworld. I hope you enjoy this coin as much as I do and learned something. Keep those comments coming. Thanks for looking.
SOURCED: www.vamworld.com
A Buyer's Guide to SILVER DOLLARS & TRADE DOLLARS of the UNITED STATES. by Q. David Bowers-2006

Great job with the information. Peace dollars are one of my favorites.

that is a beauty, you have quite the silver dollar collection

Beautiful Peace Dollar! You always seem to find the cool Vams...ones we can see! Thanks Longstrider! Another great piece for your collection!

That's a really nice Peace Dollar. VAM's aren't my thing but I can appreciate them.

Nice blog. It is great the way you explain varieties.

A fav coin and a beauty. A toned Peace dollar is unusual.

Great blog and a great coin. I like the vams I can see. This one is obvious. Great coin for your collection. I like the tint also. Peace dollars don't tint well this one did. Terrific information and all coin collectors should be looking for. Thanks to you they and I will be. Thanks for the blog and great pictures. I believe these coins are underrated. They shouldn't be. They also give a great message. Peace. Thanks for your work. Mike.