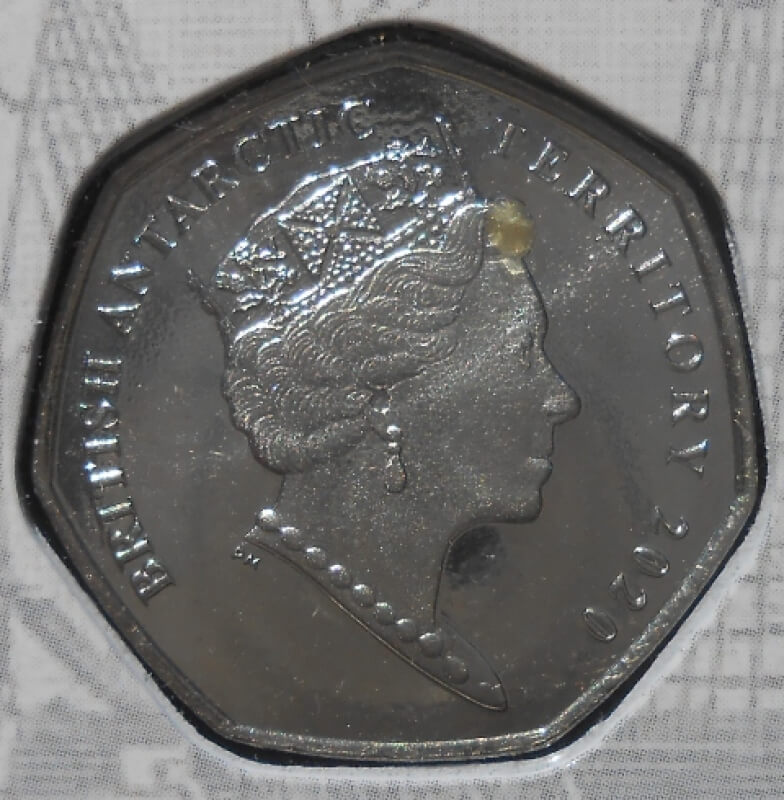 Now, this is going to be an unusual blog, for me at least. I bought this coin and was all set to blog about it like normal. After getting the photos ready I noticed everything I was going to tell you about the coin is all on the photos. Crazy. I decided to do it this way and talk more about the place the coin is from. Here goes.

The coin is a new 2020 50 pence commemorative. It is struck from the Pobjoy MInt in England. All the specs can be found on the photos below. It is backed by the British Antarctic Territory. Sorry the photos aren't that great. I took them through the plastic in the card. You may noticed the USPS did their best to fold up the card.

The British Antarctic Territory or BAT, is a UK administered in London by their Polar Regions Department of the Foreign and Commonwealth Office. The BAT is the oldest claim on any of the Antarctic continent. Even so, there is no formal British Government presence in Antarctica.

What the BAT does do is run the British Antarctic Survey which in turn operates three science stations  and a Royal Research Ship. It also runs the United Kingdomâ€™s Antarctic Heritage Trust. A historical trust based at Port Lockroy. Lastly they have the Royal Navyâ€™s ice patrol ship HMS Protector.

Their stated purpose is â€śTo support the security and good governance of the territoryâ€ť. Simply but, they are a scientific organization, as all Antarctic bases are. I am personally fascinated by Antarctica and have also written a blog on it back on 28 August 2018. Give it a look. In closing I would like to say that I have seen some nice coins offered at The Pobjoy Mint and never ordered any. I thought that since they are a UK mint the shipping would be too high. Well, it seems they have an office in the USA. Cool.

I hope you enjoyed this off beat blog. Please feel free to comment. Thanks!

Until the past few years I'd never really paid to much attention to foreign coinage other than the Maple Leaf, Krugerand, Pence and such. When my niece took an interest, she specializes in 1800's Japanese, I learned to look a little more. Now you guys come along and hook me. Thanks Longstrider!

Great post John ! Very interesting and good pictures also! After reading your post I have become more "educated" about foreign coins and their origin ! Who said you can't teach an old dog new tricks? :-) Thanks for sharing ! CharlieB

Great blog. I wish there are more blogs like yours. A blog can be written on the rarest to the most common coin. There is a story with every coin.

Great blog! Packed full of information! ; ) I love the ship's design... I have started a small collection of silver bullion Galleons. Thanks again!

Great xoin. The mint even thogh private makes great commens. Thats for the research. Ross dicovered the Ross Straight. .There is allot of history with that great country. So many expeditions. Its hard to keep them in order. Well done. I like.it all.

Longstrider, I will have a very short follow-up on your blog that I will be posting soon! Watch for it!

Looking forward to it Gary. Thanks.

Very nice coin Longstrider, thanks for sharing an interesting and educational find.

Thank you for sharing what a beautiful coin!

Mintage of 2,750 is pretty low. I see there is a Resolution coin also. Very interesting coins and these would make great gifts for those interested in ships etc. I like that they have a low mintage. Amazing what coins are being produced these days. The Popjoy Mint is very active. I have never ordered directly from this mint, but do have coins minted at Popjoy. Thanks for sharing.

Thank you for sharing, Longstrider - I had no idea this coin existed, Your post reminded me of two things; one of them hysterical and the other one horrific: the Boaty McBoatface 50p coins of the B.A.T. I picked up a couple years ago, and the lost expedition that led to the HMS Erebus' demise. Is there also a coin made showing the HMS Terror? I got chills reading your post, thinking about Sir John Franklin and his attempt to find the Northwest Passage in the 1840's in the Arctic. Both the Terror and the Erebus left England, but never returned, and neither did any of the men on the journey. Horrible accounts of what happened to them are found in spotty records , and there was even a mini-series that aired I believe in 2017 or 2018. Now that we all have some time confined at home, you might want to watch, "The Terror" if you are a fan of the scary stuff. And during this time of necessary social distancing, I do not suggest watching this one alone or if you scare easily, especially if you're the type that can suspend disbelief rather well. And if I remember correctly, I think researchers actually located one or both of these ships recently; still at the bottom of the drink, but in amazing condition due to being in such frigid waters. -Sam Gelberd, ANA Numismatic Educator.

I watched that series when it was on, The Terror. It was great. Thanks Sam..