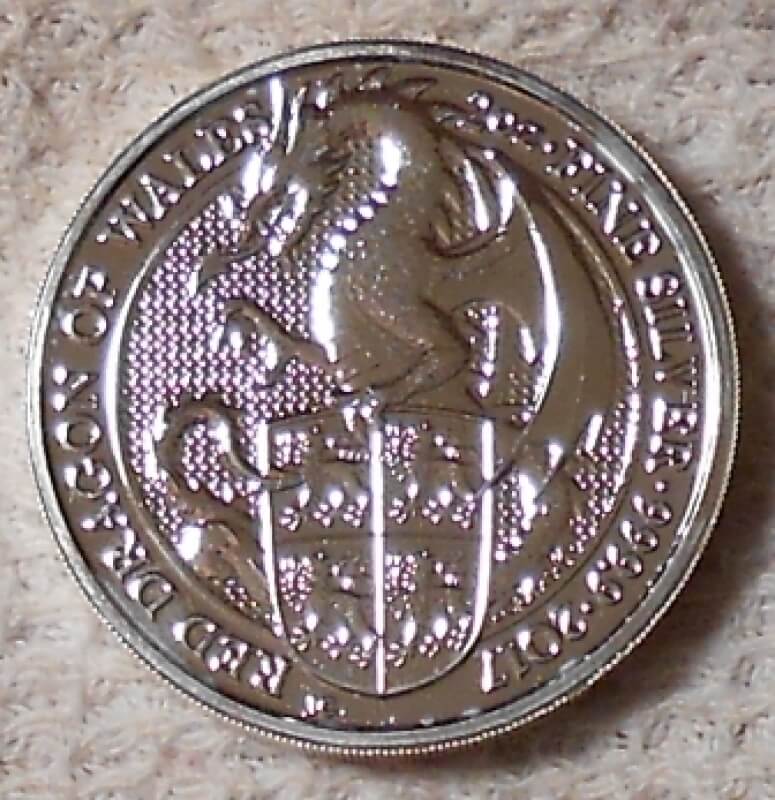 First off... Happy Fathers Day to all us dads! I guess I left enough hints of my lusting for this coin. I was afraid I was being too subtle! I am a huge Dragon fan as well as this particular coin in the Queen's Beasts series. The Dragon below is entitled The Red Dragon of Wales. Modeled after one of the original statues that were created years before, under the reign of King Henry VIII. The statues were to serve, protect and honor the young queen.  It is 2 troy ounces of silver. It is officially listed  by the Royal Mint as GEM Brilliant. However, the field on the obverse seems to have some type of pebbly texture similar to leather. With a stamped value of 5 Pounds it has a diameter of 38.61 mm of .9999 silver. The obverse is the work of Royal Mint engraver Jody Clark. It features her rendition of Queen Elizabeth II. It is also the 5th coinage portrait of the Queen. Jody also designed the reverse showing the Red Dragon of Wales holding a heraldic shield. All in all, this is a great coin as well as a beautiful work of art. Thanks for your comments and looking! Thanks Kiddo!!! How did you guess?

Thanks for the blog. Enjoyed it very much

You must be proud to be the father of a very smart child! Imagine smart enough to get you exactly what us wanted for Father's Day!! Is it nature of nurture?? Probably both.

What an awesome coin, I love it!! :D Now, if they would only figure out a way to add the dragon to the Union Jack . . .

Beautiful design! So bold looking! I like dragons too...maybe I'll think about this one for my collection.

Large, impressive, great design & silver too! This coin is nice one.

It's a beautiful coin but you always had good taste. Enjoy it as much as you can. It's home! You don't have to wait for it. Mike

Nice call back to your blog. Funny!!