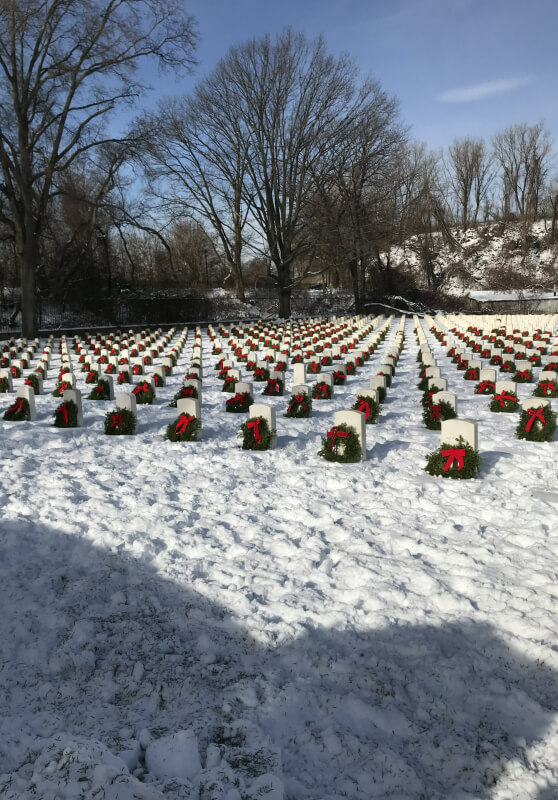 Hi everyone. This is a blog about those  who lost there lives in all our wars and how some are remembered. My wife Kathy belongs to a group called The Vikings. Twice a year they go to the local Military Cemetery and remember . During the year they raise money to buy the wreaths. They sell chances fifty fifty.  Enough to make sure every soldier gets one. Every man and woman.
The ones on top of the hill are from World War  1. . Down the hill World War  11  then Korea and Vietnam..  They all get one and the weather has never stopped them all these years. There are other groups  in other areas were they do the same thing. They say a prayer before they start and when there done they stop and just say Thanks!! They leave they don't  know.any of them they don't have to. Then a few moments when they look and see what they have done. Some relatives show up but very few.

No one seems to show up from World War 1 . Yes there families either can't make it or they know that someone will. The Vikings. . I never asked my wife why that name but we all know the Vikings were fierce warriors like those laying there. It's peaceful you here a bird fly over the do there work. My wife was laying a wreath and saw the name Aloysius LLyod  Byrne. No relationship. She stoped to say hello and thanks. Some members say something at every grave.
They work hard all year. But this is not work this is an act of love. A simple act but I can tell you those soldiers really appreciate it. You can just feel it. together there Christmas gift. From a bunch of kind hearted people. People who never knew them.. We're ever you live think of starting a group. . I know the families that can't make it would greatly appreciate it. The winner of the fifth fifty always gives there winnings back to the group

The coin says it all. One soldier helping the other. The other pictures show regular people helping them . . It doesn't take long but the memories do.  They last. They feel they did the right thing. And they did. A big thank you to the Viking group and groups all over the country.  For giving a gift to a soldier they never knew.  Be safe be well.

HooAh MikeB ! You and I have spoken about this before. God bless you and your wife!

A wonderful tribute and gesture.

Great blog Mike....My Great Uncle was in WW1 with the American Expeditionary Forces. We never forget those brave men

It is sad to see that most of the WWII veterans are gone, and the ones left aren't too far behind them. Thanks to your wife the fallen heroes get what they deserve every year.

Fortunately, there are great people like her throughout this country. I like to see all the wreaths put out this time of year.

Kathy's commitment to this tells me all I need to know about her, even though we've never met, your Lady is a Goddess of of Love and Compassion. Well done, you honor her with this blog. Nuff Said!

What a wonderful idea! Many thanks to Kathy and all the folks who honor our Veterans in this way at this time of year. The wreaths look beautiful.

There is a couple of groups by where I live that go to Riverside National Cemetery on Wednesdays. They attend funerals for all vets that have no family, being buried that day. To honor them. Thanks Kathy and all how do similar things.

It is great your wife takes the time to honor these people. thoughtful blog.

As someone who will end up in one of those graves someday I can tell you that I appreciate the effort more than you can know. Food for thought - Every Friday is RED Friday for me. Remember Everybody Deployed. As a reminder that there are those serving even now. I also advocate sending care packages to those currently deployed.

That's a wonderful thing that you do!

That is a wonderful thing your wife is involved in. Ask her why its called the Viking Club! Now we all want to know!

A touching and appropriate topic at the moment. Thanks Mike.

Wreaths across America placed wreaths here at the Indian town gap national cemetery. Ive donated money for wreaths the last two years. 40,000 wreaths are placed each year. No ceremony this year. Last year the ceremony was attended by hundreds. Quite a moving experience to see 40,000 wreaths to remember our military and their family.

Sounds like a great thing to do for those who served. Let's make sure we don't forget them during this holiday season. Thanks for the update!