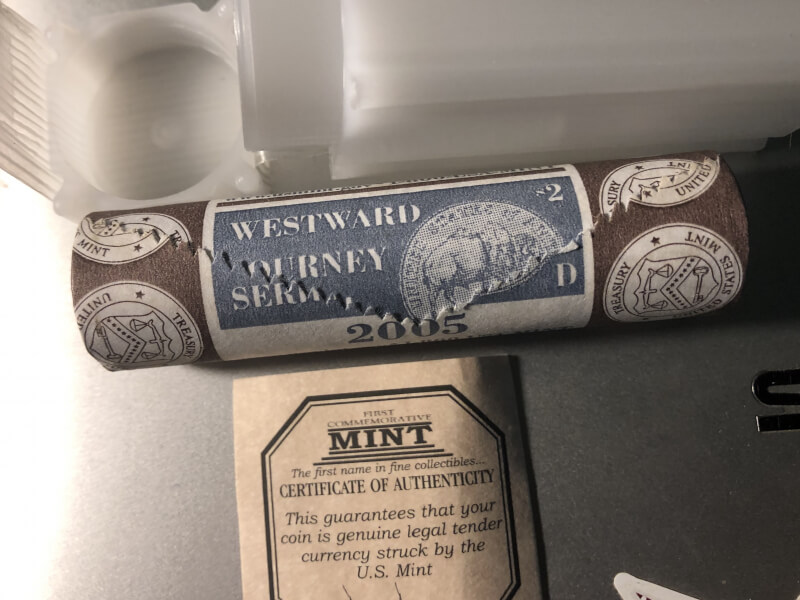 You know what they say, the mind is the first to go! Yesterday when I opened my roll of nickels that I thought I had bought back in the 80's, it turned out that I was incorrect. I know it had been a long time, but I guess it depends on your definition of long. When I cracked open the roll, it was a roll of 2005 Westward Journey Buffalo nickels from the Denver mint. This was strange due to the fact that I had just bought the complete set about a week ago. I didn't have the heart to open the roll, so I just took pictures of both ends. This could possibly end up being a donation to the YNs.

I would like to get some opinions from folks in reference to the First Commemorative Mint though. Is their products considered "junk money" even though it comes from the Denver mint? When Jackson passed away and I bought his tribute set, which was a 5 Decade set of Kennedy Halves from the San Francisco mint, I bought them from Govmint.com but they came packaged from FCM. I have bought several items from them in the past, but I guess I just don't know what's Junk Money and what's not! I would appreciate anyone's thoughts on this subject.

Anyway, the mintage of these nickels is 487,680,000. They look nice and are rolled up just like they came from the mint. There may even be some proofs in there, who knows. I put them back in the roll and sealed it back up just like I received it. Enjoy the pictures and I apologize for the huge error in the lapse in time. Until next time, stay safe, HEALTHY, and coronavirus free!

Jackson was my dog.

I don't collect nickels, though I can see the 2005 westward journey designs being the 4 design year that lincoln cents had 4 years later.

Those westward nickels, I'd be hard pressed to part with. They are great coins. That would be extremely generous of you to do that!

I've never personally bought from them. They look to be another dealer that resells the mints items. One of many. It seems to me that GovMint.com is buying out everybody. I believe, they bought Silvertowne a while ago. It looks like they bought ModernCoinMart recently. I'm on both mailing lists and they come back to back and are identical other than the name. I have bought from GovMint when they have had something no one else has. Mo problems. Even a gold buffalo! One hint though, if they say an item is "available to order" that doesn't mean it's "in stock". They got me on that once. Good luck Charlie. Is there anything that's junk money? Not if you like it.

Very cool roll! Thanks for sharing! ; )

I love nickles. I didn't know that you had an interest. On eBay you see coins like this. Only you don't get the whole roll. They put one in the beginning and one at the bottom. Then they put a ? Mark this allows them to get away with it. This mint I never bought from . At least you got a whole.roll.well you do what you want. with it. Every Easter I put coins in Easter eggs I go to my friends and hide them in there yard. It also has a note what coin it is. They love it. And who knows they might stick with it!! Something good will come out with those coins. . Sun and myself love nickels. He's been with the ANA a long time. He's a good man.

Thanks for weighing in folks! I really do appreciate it for sure. I have quite a few items from First Commemorative Mint, but was told by a local collector who appraised my collection back in the 90's that most of my collection was junk money. As I've said before, if I liked it, I usually bought it... depending on the price of course... :-)

Never purchased from Govmint. I should check them out and see what they do have. Ive seen ads,but usually dont go for this type of seller. Nice roll of 2005 nickels. With that high a mintage its amazing.

I have purchased a couple of items from Govmint.com that I could not find elsewhere, and one of them was shipped from a "third party". The items I ordered were all in the condition and grade promised. As Mokie points out they do seem to be above standard market pricing when you add in the shipping costs, however sometimes they have sales. I am on their mailing list but only order what I just can't find anywhere else. As with most, I normally order from the official US Mint, or one or two on-line coins shops I've been turned on to by friends in the hobby. Having said that the two times I've ordered from them, the product was received in condition promised, and none have been "Junk Money". I am anxious to hear from others out there and see if they've had the good fortune with them that I have. Again, I only order from them when I simply can't find it elsewhere and I just "Have to have it". Thanks for the blog.

The Denver mint doesn't mess with any proofs, so i don't know how one would get in there. There may be errors though. I personally would rather have the coins individually than inside the wrapper.

What a great looking piece of history... They are beautiful, congrats

Hey Charlie, I have never purchased anything from the first commemorative mint but they seem to be a simple reseller and re-packager of U.S. coins meant for folks that are not really experienced collectors yet. The kind of thing they can promote as having potential long-term value without breaking your budget. Seems like things are a little above standard market pricing but again not crazy expensive. I wouldn't necessarily find them attractive but I see nothing wrong with their marketing.