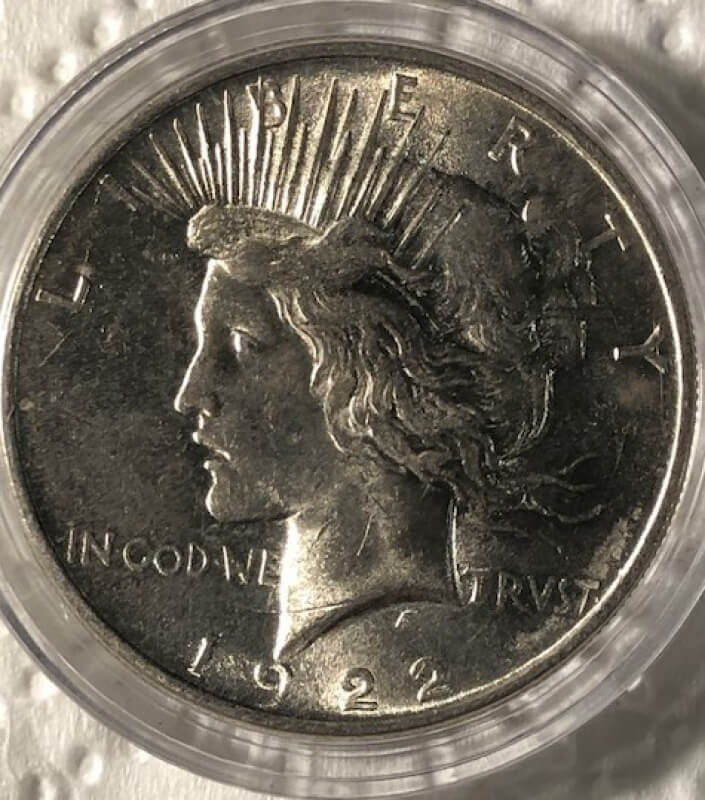 Recently I was adding some Peace dollars to my collection when I had to refer back to the book for some statistics. I ran across chapter 4 again and decided to re-read it. I like a good mystery anyway. The title of chapter 4 is "The Lost 1964-D Peace Dollars".  The story starts in 1963 when mint director Eva B. Adams, along with a couple of Senators from western states, decided more silver dollars were needed out west and made a deal to make more of these coins. This coin was popular out west because gamblers in Nevada used them. The 2 Senators from Montana, Mike Mansfield and Lee Metcalf brokered a deal with the Treasury to continue to make silver dollars even though Adams and the Congress insisted it would cost too much and that they weren't needed "nationwide". President Kennedy requested $675,000 to make 50 million more silver dollars, but production was halted upon his assassination.  There are a couple of things that stand out to me in this story. Number one is, if you remember, Eva Adams implied there was a coin shortage caused by collectors during this time frame when actually it was a shortage of silver. It's the reason we have the "SMS sets" of 1965-1967.  Number two is, why didn't Mansfield and Metcalf push the envelope when Treasury didn't keep up their end of the bargain? I found it interesting that they shipped 2 ammunition presses (named Bliss Ammunition Presses) to Denver to make these coins and they applied accountability by using the weight of the planchets  instead of counting individual pieces (see pictures).  Mint attorney Carl A. Landis writes in the Numismatic News Weekly publication "It is personal property of the United States, which the United States is entitled to recover, where all such strikes were carefully weighed before and after they were melted into bullion and the weight remained the same, thus indicating that the strike involved was stolen from the Mint by substitution of a planchet or a dollar coin of an earlier date." The problem with this is that the folks at the Denver Mint say nothing about the weight of metal after melting! According to the book, "A low-resolution photo of the obverse die was recently discovered, but it lacks sufficient detail for more than general confirmation of the 1964 design (see photos).

Would be nice to find one.

This is for all the cherry-pickers out there! There may have been up to 3200 modified high relief 1922 Peace Dollars out there released into circulation. NGC has recently certified the 5th know example of this rare Peace Dollar pattern. The following is a link to an article describing this fascinating coin! https://www.ngccoin.com/news/article/9168/1922-modified-peace-dollar-pattern/

Great story! I believe they do exist out there somewhere. Can you imagine when one does turn up! ; )

I still say it's an urban legand. Believe me if they were out there one would show up at auction. Why hide such a jewel. . Simple we have to remember if they were made it was against the law. . Congress has to approve it. The treasury department has to approve it. The treasury department runs the mints down to the prices. . You can down load the Treasury Departments rules and who they oversee. The mints are fifth. This is just like the sixth 1913 nickel. They would have to be returned to the government and melted. Also they are not legal tender! . That was it. It was put away. In that picture you don't know if that's a piece dollar die. That picture looks older than the time they found it. . Didn't they find the master die in 1970?

No doubt some exist. To tempting at the time. They will turn up eventually.

They exist. They are hiding in Fort Knox somewhere. Next thing you know there will be a lawsuit over them like the 1933 double eagle. Fodder

Great story. Bowers and friends finding the dies at the mint a few years ago did a lot to revive the story. I just picked up three Peace Dollars from my dealer yesterday. Today I will be checking them for VAM's. Thanks.

Someone has them somewherre. Those who are somone. Those who have money. Were Not part of this. Basically I don't believe anyone has one. . If they did they would have to be returned to the Treasury Department. They were not authorized by Congress. Another urban legand. Not till I see one. I am the doubting Thomas! I don't see gamblers using these. Thanks for the info.

It is great to have books to refer too.

I am with Long Beard on this. I also believe there are some of them in the wild waiting for a sale, maybe overseas, or a calamity to reveal the first of several. Waiting for that day, it will come.

Another fine topic. I believe the 1964 d's do exist, hidden for fear of what the Treasury Department would do. Consider that, according to their own records, employees were allowed to trade/buy them the first few days of production. But the letter from Adams to the Denver Mint requesting them to be returned would most likely be the backbone of a government case should any turn up in private hands.