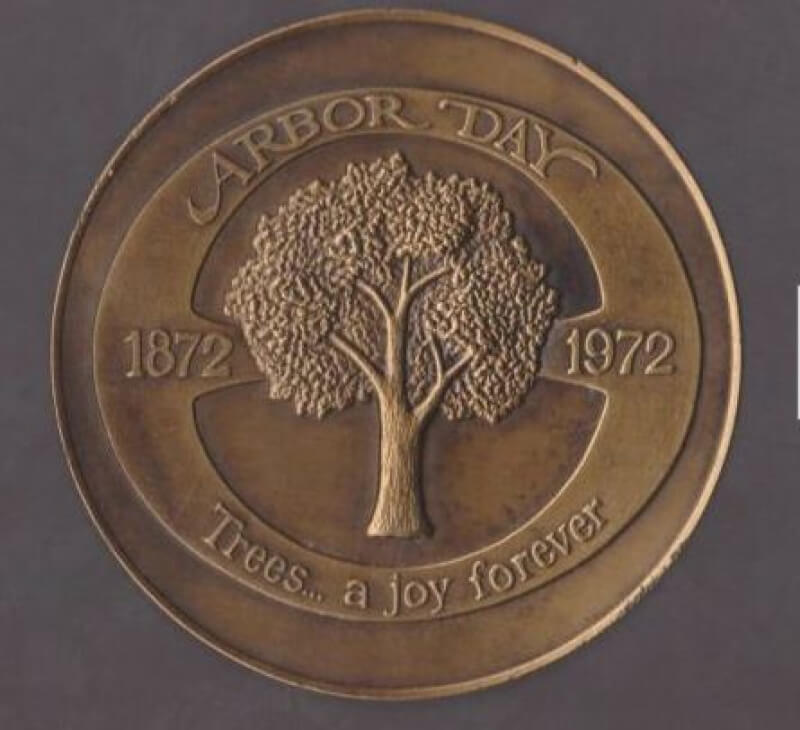 J. (Julius) Sterling Morton, editor of Nebraska's first newspaper, "Nebraska City News," promoted the tree planting day.  As editor of the paper, he had a platform to spread the knowledge of trees.  J. Sterling Morton worked with the Nebraska Board of Agriculture, and the first Arbor Day was April 10, 1872. For many years, Arbor Day, was set on April 22nd, Morton's birthday. Morton lead the way of planting almost a million trees in his life time. Arbor Day is a state holiday in Nebraska.

Morton built Arbor Lodge, a 33 room mansion, to resemble the "White House."  His son ,Jon, expanded it to 52 rooms.  Jon was the founder of the Morton Salt Company, its motto "When It Rains, It Pours."

The 35mm medal obverse shows Arbor Lodge and the wording "Home of J. Sterling Morton Historical State Park," "Nebraska City, Nebraska." and "Arbor Lodge." The reverse is similar to the larger medal. The 35mm medal comes in nickel-silver (shown), goldine, antique bronze, and silver.  My  4-medal set came in an envelope with an invitation that reads "The Arbor Day Centennial Ball Committee request the pleasure of your company at a Centennial Coronation Lawn Party, and Ball to be held in the Rose Garden of Arbor Lodge State Park at Seven thirty o'clock April 22, 1972. tickets $1.00"

I have fond memories of Nebraska City.  When I lived in Nebraska, I would take the family on a day trip to Arbor Lodge to enjoy the fall colors and visit apple orchards in the area.  I attended my first coin show, 1970, in the town.

This blog is a great example of a well written blog. Good history. Pictures and enjoyable to read. Not three pages long but not four lines ..Thanks Sun. I enjoyed the read very much!

Very interesting that Arbor Day is a holiday in NE. It takes a lot of pushing to get a certain day to be a holiday.

Beautiful medals! Thanks for sharing them! Enjoyed your blog! ; )

Nice medals. Thanks for the history.

I love architecture as much as coinage. That's one place I'll have to see for sure. I've been to Nebraska twice in my lifetime and I must say that it is truly an under-appreciated state. Thanks for sharing!

Great medals. I learned a lot from you today. Thanks.

Thanks for the great story. That's a day that has been forgotten. Thanks for bringing it back to us. The coin says it all.

Nice medals. I want to find a couple. Thanks

" I think I shall never see a poem as lovely as a tree" Joyce Kilmer These are beautiful medals, thank you for introducing us to them.