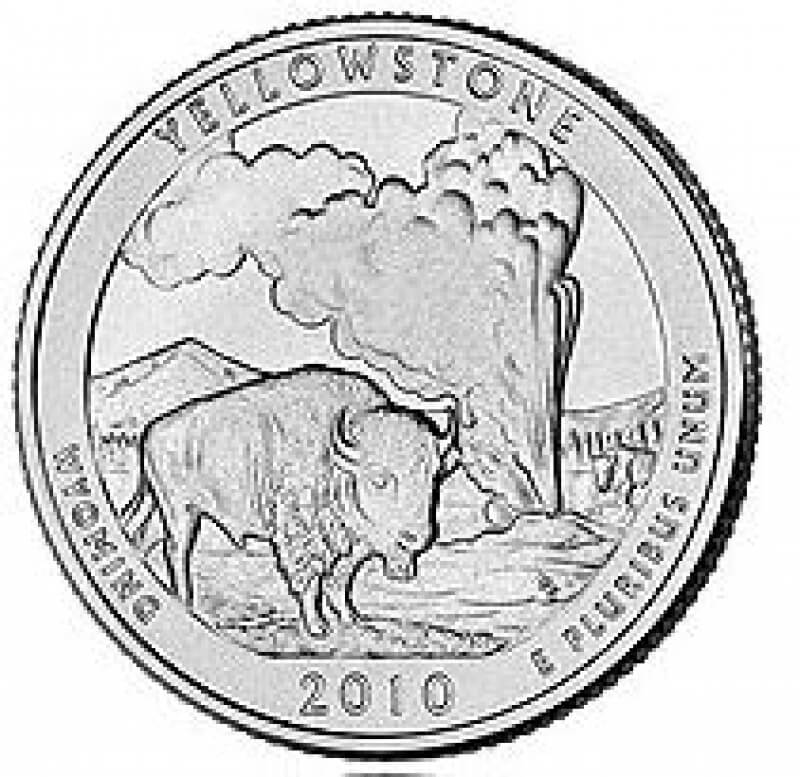 14 Aug 2016
Are Commemorative Coins boring?  The sales of this years commemorative coins are lackluster. With over half the year gone and with the bulk of the sales taken place, the sales of the Mark Twain Silver Dollar is about 25% of the maximum mintage, while the $5 gold piece is around 17%.
The National Park Service Centennial coins do not fare any better. The dollar coin is around 15% of the maximum mintage, while the $5 gold piece and half dollar are around 18%.  The design of the National Park Service silver dollar is a re-hash of the Yellowstone National Park Centennial Silver Dollar (1999), which was struck two years after the centennial of the park, and the "America the Beautiful" quarter program(2010) for Wyoming. All three coins depict the geyser "Old Faithful".  Two of the coins have a bison near the geyser, the bison are not near "Old Faithful."  You will fine the bison in the range land of Yellowstone National Park. Just think if the mint would have teamed up with the parks and sell the coins at the visitors centers. How many coins could be sold? I live near Zion National Park, and there will be close to four millions visitors this year.  If you take 1/10 of 1% of the visitors, the mint would sell another 4,000 coins, spread this to all the parks in the country, the sales could amount to something, and maybe get some new collectors.
Next year, the mint will strike commemorative coins for the Lions Club and Boystown (Nebraska). Boystown will be the first modern commemorative (since 1982) to be struck for a town. Town commemorative were not big coin programs in the past. Like the Boy Scouts Commemorative in 2010, the mint is going to be "politically correct" by including a female on the design(Yes, I know there are females at Boystown). I think a good design would be Father Flanagan, the founder, and the statue "He Ain't Heavy, He is My Brother."

I find no interest in the boring "modern" commemoratives, except for the first one, the 250th anniversary of George Washington.

I have told my parents before that the US modern coins are really boring numerous coins, here you help my thinking even more. We have so things out there but the mint dont care. look at the world coins and they put out all sorts of circulating commems and change designs more often, etc. but the US? same designs for 70 years at the least ( not counting kennedy) with small changes except the quarters. Also all those rio olympic circulating coins from brazil,australia, canada... we win first in total medal count but NOOO! No commem or anything for it. ( non of this really regards to some of the older US coinage)

I forgot to add that the early commen made the late 1800 s and 1936 I would not buy the proof coins. Why the mintage was way to high. It turns out that years later when RICK TOMASKA had his own show he came out and said the same thing! I was shocked. His reason low mintage means rarity. The less coins the less sent to be graded. I couldn't believe I had made a reasonable decision. Thanks again. Mike

A very detailed blog post! I never really thought about your point, but now that I have thought about it, I think it's true that commemoratives are kind of dull. Again, a great post! -Kid Morgans :)

I like your blog. I had no idea there were so many coins with Old Faithful on them. Not at all America's most interesting subject matter for a coin. I like the Boy's Town coin idea, too. Myself, I would really like a series of com coins that highlighted some of the lesser landmarks of American culture, the wistful ones. Like the Great Ball of String, Moaning Caves, Drive Thru Redwood Tree. There is a tree along Highway 50, the Loneliest Road In America, that travelers have been tossing their shoes up into for years. Tree is filled with shoes. I would buy THAT coin, with all seriousness. The things you see in America when you hit the road for a vacation are amazing, I would love a 70's road trip across America series of coms. No Old Faithful's though.

Hi ! received a magazine I forget which one so I won't mention it. It had an article on America's ugly duckling's. Their words not mine. They showed about maybe seven coins which they considered ugly. Beauty is in the eyes of the holder. There have been many coins repeated over and over. What it comes down to is what you like. I looked at the America the Beautiful quarters. I liked them but in silver and uncirculated. Some of the designs were repeated but I don't own those so these are new to me. I think some of the designs are beautiful. Buy what catches your eyes. That's what I did and I like them. Then I'm only one man with one opinion. Thanks for the blog and the information. I can always use that. You did your your homework that's what counts. Mike

Nice post "SUN." I think you expressed yourself well. So if you think the designs are boring, my advice is "don't buy them." If you agree with W2CU, buy them for the potential return on investment. This is the eternal dilemma for the collector, "when to buy and when to pass." I for one will not be buying them because I only buy what I like.

Sad to say the "boring" looking commemoratives are sometimes the best investments. The NPS commem discussed is a prime example. True, how many times do we need Old Faithful depicted on a coin? I swallowed and purchased a business strike because they sell much less. The 2014 Civil Rights dollar also sold poorly, but its around $70 in MS69 right now, not bad for something 3 years old. I routinely check up on the U.S. Mint sales figures regarding commemorative sales. Yes, I'd like to see more better designed commems, and the Boys Town appears to be one of them. But the classic commemorative series have also had their "dogs" at the time, and even they appreciated. The Wisconsin and Columbia,SC coins are boring, but would not be overlooked by today's collectors. At least the NPS coins , along with the Mark Twain, have one side which looks better than the other, and sometimes that's the best you can ask for. Better to have a boring commem than none at all. God knows we waited for them.

The Uncirculated half looks like a sleeper at this point!