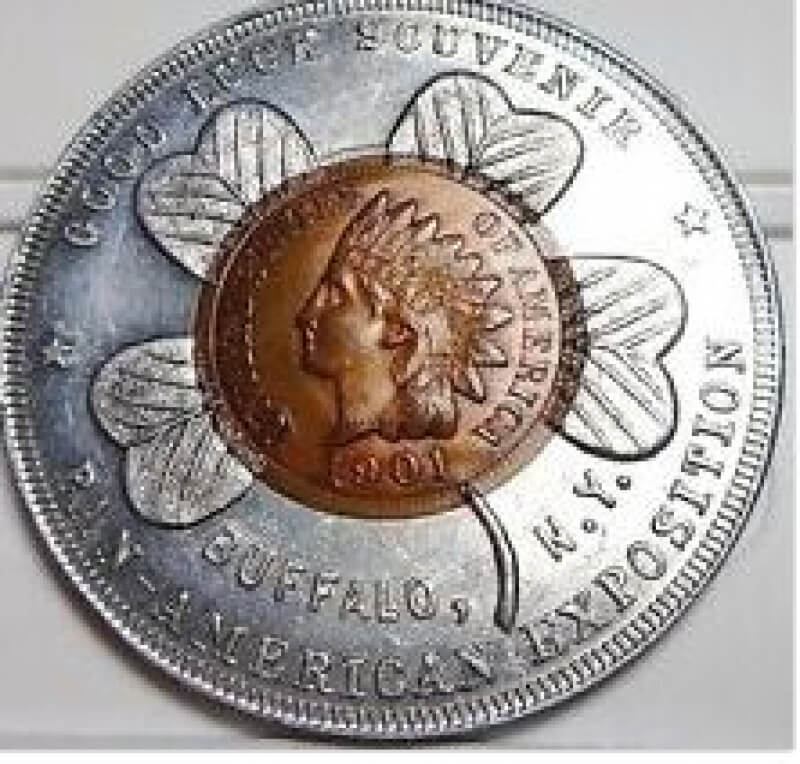 18 Feb 2019
ENCASED COINS
One of my collecting passion for the past 25 years is collecting encased coins.  The beginning of encased coins is generally regarded around the Pan-American Expo held in Buffalo, NY in 1901. Several varieties can be found for this expo.
A person can make a collection of encased coins any way they choose. The Pan-American Expo is popular as well as the St. Louis Worlds Fair in 1904. Coin collecting related encasements such as, coin dealers, coin shows, and coin clubs are usually inexpensive  Chevrolet Dealers encased pennies from 1947-1948 is another popular area. On the average these will running around $25 and up.  Collecting by states is also very popular.
At one time, I had an enasement from every state.  I tried collecting a date run of encasements from 1901. I have never found a 1987 dated encased coin. My main area I collect now is encasements from Nebraska, since I lived in the state several years. I have the largest known collection of Nebraska encasement. Out of almost 400 different encased coins, I have 270 encased coins. Last year I was just able to add 3 different ones to my collection. This year has started much better, with 3 additional pieces added.
The Edwards Jewelry encased 1936 penny pictured was previously unknown until now. In the last 5 years just 2 unknown pieces have been added to the Nebraska encased coins listing. I was lucky that I was the only bidder on ebay to acquire this encasement.

Nice collection I love the Indian!

I've actually never heard of encased coins! then agian, If I had been around longer, I probably would have

These are really cool! Sounds like you have a wonderful collection!

This is another great area of collecting.

Great idea for collecting. I have one from a friend. It makes even more sense now. Nice guy. Thanks!!

I really like these! Coin shows often give away a few.

I own one of the 1901 Pan American Exposition encased Indian cents. The coin looks proof. Is it possible they encased a proof Indian? Can encased coins be graded?

I have seen some encased cents in slabs.

I suppose someone somewhere has written the guide to Encased Coins?

Not really, there are different state listings. There is a book on Frederick Earl Fankhouser encasements. He peddled making encasements for various companies in the late 50's and early 60's. Also, I know of 3 clubs over the years, but have disbanded.

Got to love them. There great almost like a token advertising a certain business not only a great idea but you must have many designs. That's terrific I never saw any here but if I have three it's alot. No place hands them out. Elongated pennies I have a few when in was able travel. I have and old.one on Columbus it's really nice great collection ideas thanks and continue getting them. Sounds great. Mike.

That is a very cool collection you have pursued. I have had a few encased coins in my collecting life but have never pursued them as an active area. I enjoyed hearing about your efforts Sun, maybe someday you can put together a book about Nebraska encased coins.

Some these are quite excellent. That indian Head one is great. Thanks for the article.