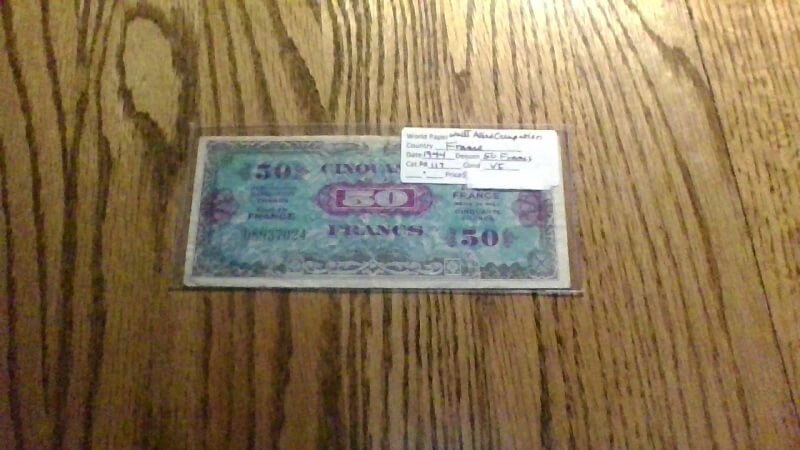 While the French people of 1944 may have said, "Ooh cinquante Francs!" when they call their future friends of 1945 they'll be sad to hear that their favorite money has already been pulled from circulation.

The specific Franc shown is one of my own. It like many others is from 1944. These Francs were issued in 1944 during World War Two by the Allied Military Government for Occupied Territories. Just to be later removed from circulation today.

On the back it states, "LibertĂ© EgalitĂ© et FraternitĂ©" and on the front it says, "Ă‰mis en France" along with other things such as, "Cinquante Francs". This is also a fun-colored and beautiful banknote.

Interesting and colorful note. An interesting time in history.

No problem. You collect them I don't. I actually obtained it from a book on D-Day. It had many real artifacts the note being one. You never know were or when you will find a piece of treasure! Thanks for the blog!! Its good you protect it the ones not are worth very little. Condition is everything!

I got mine from a good friend. It is a nice compliment to my MPC collection. Thanks Mike. Thanks to you for this read.