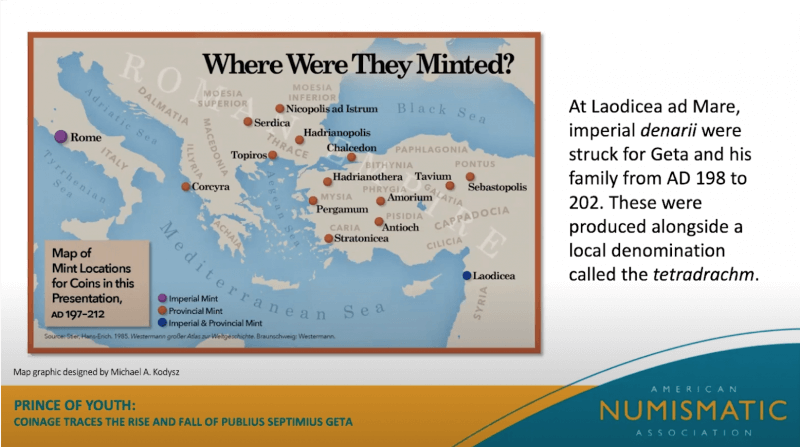 Discusses Severan-era Roman coinage illustrating the life of the Roman emperor Geta. This youngest son of Septimius Severus was propagandized on coins from childhood as destined to rule alongside his brother Caracalla. Coin types legitimizing Geta's status as imperial heir include those featuring him as Princeps Iuventutis, meaning "prince of youth" or "first among the young."

Other types shown are those that celebrate Geta's harmonious relations with his family, his brother, and the military. Geta's portrayal on coinage as co-Augustus with his brother Caracalla is examined, as well as portraiture that forms a visual chronicle of his physical development from boyhood to maturity. Coins showing evidence of erasure and defacement are included as well. On some coins, Geta's image was physically mutilated, and these coins form numismatic evidence of the damnatio memoriae instituted by his brother Caracalla, who murdered him.

Brought to you by CDN Greysheet https://www.greysheet.com/​

Thanks for this information! ; )

These webinars have been top notch.

Education is a must when collecting . Young numismatics are heroes of the furure .

Looks like a place to learn a lot of history.

Looks like a great presentation and numismatic area. History to be learned. Thank you.