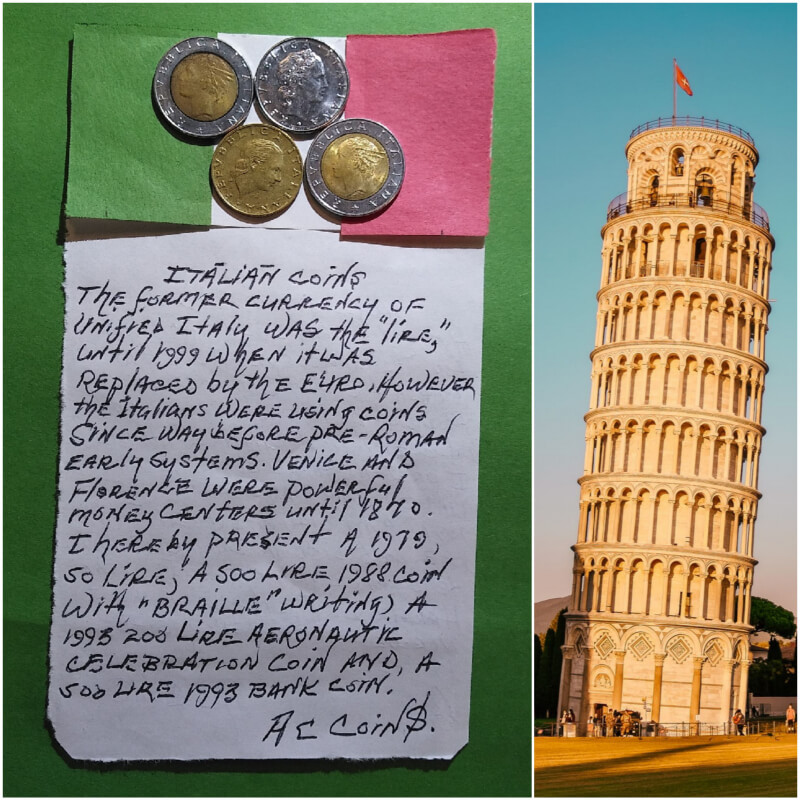 ***From my perspective, Italy is a magnificent adoptive and caring country opening doors to all  with joy to their lands.

The lira was the official unit of currency in Italy until 1 January 1999, when it was replaced by the euro (euro coins and notes were not introduced until 2002). Old lira denominated currency ceased to be legal tender on 28 February 2002. The conversion rate is 1,936.27 lire to the euro. ***Wikileads***

The Leaning Tower of Pisa is the piazza's crowning glory.

Although only a third as high as the Washington Monument, it was a miracle of medieval engineering, probably the tallest bell towers in Europe.

With 207 columns ranged around eight stories, Tower of Pisa looks like a massive wedding cake knocked precariously askew by a clumsy giant guest.

The construction of Tower of Pisa began in August 1173 and continued for about 200 years due to the onset of a series of wars. Till today, the name of the architect is a mystery.

The tower has eight stories, including the chamber for the bells. ***italiantourism.com/Pisa***

***Two beautiful cities un Italy are Rome, the capital and Naples, a great destination for many. Italy is known for being one of the top olive oil and wine producers and exporters in the World. Its farm equipments, engineering and furniture designs are considered impressive and reliable by many consumers worldwide.

From the bottom of my heart do me a favor,,,, If you are here, push the follow me button by my username. For further details about this coins and others please visit my collections section. Thanks,

It would be nice to see in person. Coins would look great with it.

Same with Golfer. I wonder when the tower will fall down? It will be sad when it does though. Glad its still standing. Thanks for the information and coins!

Can't believe the tower is still standing. Will be a sad day when the tower falls. Very impressive structure. Italy is fantastic country.

How do you feel about this? No cut and paste. You!