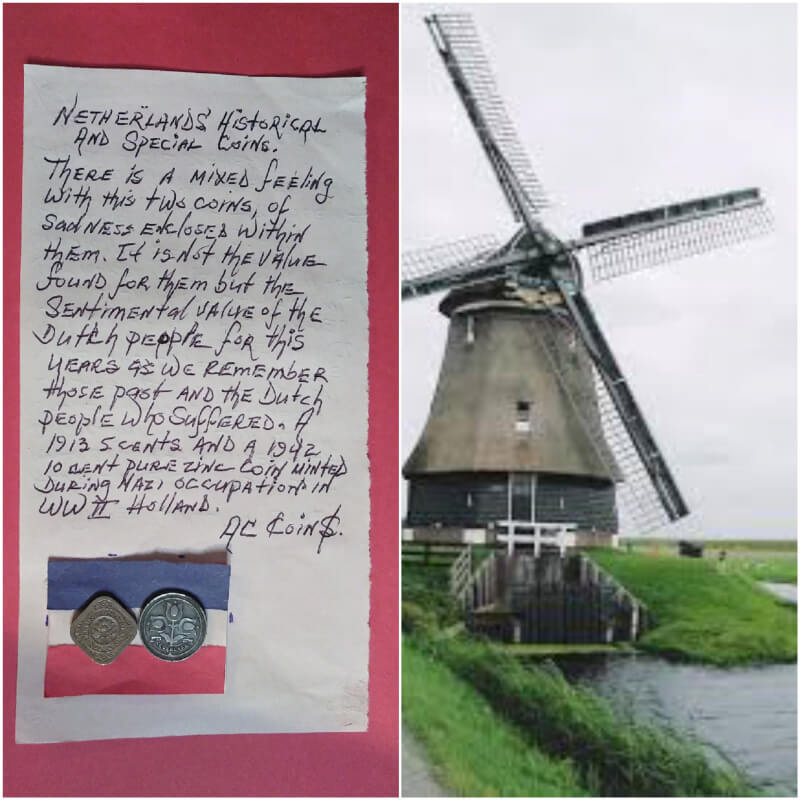 Netherlands endured many societal and historical events in the early decades of the twentieth century and, specifically during the second World War.

The Dutch people faced bravely and brilliantly the Nazi German occupation alongside extreme difficulties in scarce resources, food and, being unable to move away for years.
I present two coins, perhaps for separate eras but with an invaluable richness in Dutch National poise.

It is of utmost relevance that regarding of data, technicalities and numismatic gradings, this item should be recognized and seen under a scope higher than its current collector market value. Its historical position, its origins and pure zinc composition are of extreme importance and, are tied as qualitative mediums towards a higher evaluation among numismatists and grading houses. Minted under Nazi occupation in Utrecht, Netherlands, it represents the survival and resistance of the Dutch people when facing an invading force like they did. It is a symbol of social might and determination in the midst of uncertain times. It should be considered a rare and highly collectible item which goes beyond coin books, thru sentimental value and represemtation.***

During the years of this two coins, the Dutch sovereign was Queen Wilhelmina.

Wilhelmina, in full Wilhelmina Helena Pauline Maria, (born Aug. ... 28, 1962, Het Loo, near Apeldoorn), queen of the Netherlands from 1890 to 1948, who, through her radio broadcasts from London during World War II, made herself the symbol of Dutch resistance to German occupation.

A rather mentioned city of Holland is The Hague. Its International Court is recognized as a worldwide law forum.

From the bottom of my heart, Please do me a favor,,,, If you are here, push the follow me button by my username. For further details about this coins and others please visit my collections section. Thanks,

Good to see you again My friend

I have only visited this beautiful country one time. In 1979, I rode a train from Mons, Belgium to Rotterdam to pick up my new car that I had purchased from the base exchange in Belgium. I didnâ€™t need very much of the currency from that country, so I didnâ€™t purchase any! Thanks for sharing!

Are you a veteran , a mechanic or, a pilot...? Nice story Thanks