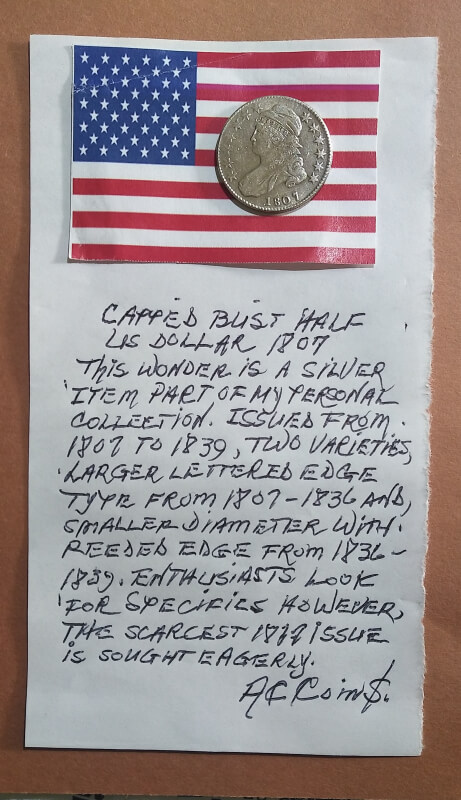 There was also a gold design created by engraver Robert Scot created in 1795, also called the Capped Bust, although it is more popularly known as the "Turban Head" because of its unusual, exotic appearance. The Turban design was used on the gold Quarter Eagle, Half Eagle, and Eagle from 1795 to 1834. On the Quarter and Half Eagles, the Turban design was replaced with the regular Capped Bust design in 1808 and 1807, respectively, while the Eagle, having been out of production since 1804, adopted the "Coronet" Liberty Head design in 1838.

He was a magnificent sculptor and engraver. A great number of his works of art and coin art settings are still studied by enthusiasts everywhere.***

Johann Matthias Reich, also known as John Reich, was a German-born American engraver. He was the assistant engraver of the United States Mint under Chief Engraver, Robert Scot.

Reich was born in Furth, Bavaria in 1768. His father, Johann Christian Reich, taught hi to engrave. He also assisted him in making medals. John Reich immigrated to Philadelphis in 1800. The following year President Thomas Jefferson recommended Reich be hired as an engraver for the Philadelphia Mint. Though he was unable to gain a full-time position of engraver, Reich was hired for other duties.

In 1807, Chief Engraver Robert Scot hired Reich as assistant engraver. Robert M. Patterson, the mint's director, then assigned Reich to redesigning most of the coins that were then in circulation. He replaced the Draped Bust design of Scot's with his own design, the Capped Bust. After ten years of no promotion or pay raise, as well as little praise from Robert Scot, Reich resigned from working at the mint. Afterward, he lived in Albany, New York until his death around 1833.

From the bottom of my heart, Please do me a favor,,,, If you are here, push the follow me button by my username. For further details about this coins and others please visit my collections section. Thanks,

I aways feel that when I get aa Bust in my hands that I am holding a real peice of americana and history with firm intrinsic value. I can't say that about many other very expensive coins, especially condiitional raritities.

Thanks for another enjoyable blog. This is a coin I actively collect

There is so much about Capped Bust Half-Dollars that makes them collectible. Add to the mix that some of them are affordable, and you have a popular collectible series.

I would be a happy man if they brought this design back. Thanks

Beautiful coin and series. Having a collection of these would be something. Great design.

Nice coin, and thanks for the info

Always liked the coin. . It should be back.

Always loved the John Reich's Bust design. I wish they would resurrect it in some fashion for our 250th birthday celebration. Animal Rights are key to our survival as a speces.