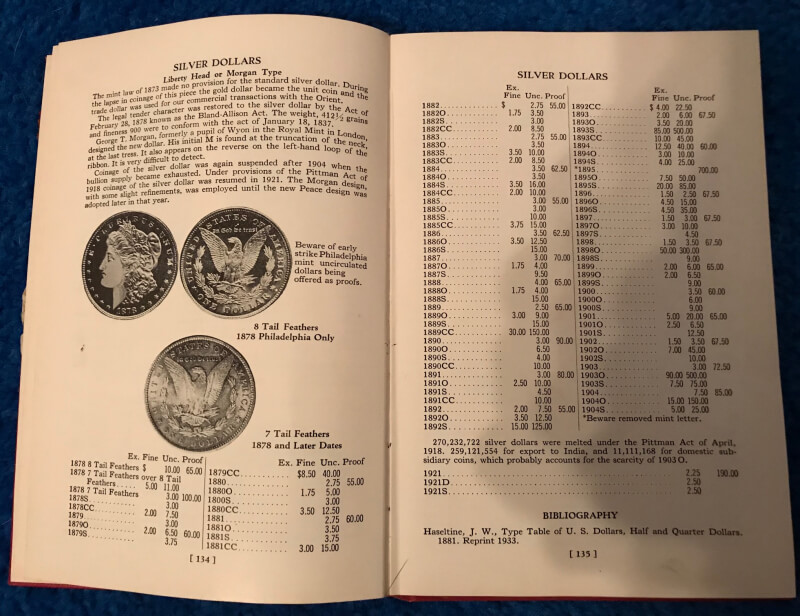 In 1971, my grandfather was 58, and I was 9.Ā He had lived through the depression and provided for his family through the CCC. He traded his Model T for a building lot and built a 3 room home. He served his country in WW II, became a postman for a small Indiana community, and he was a coin collector.I remember the tales of his collecting.Ā The banker would call, saying "Got some silver in, come take a look."Ā He created his collection and trade list on paper, taking the original to the town printer for copies to fill out each coin want/need/trade to mail off.Ā He would trade through publications on faith, sight unseen, calling out and notating who was honorable and who was not.Ā He had fellow coin collectors in town with great nicknames like "Woody", and there was a coin shop in town as well.My Grandfather's Pride was his Morgan Collection.Ā He did create other sets of Barbers, Nickels, Franklins, Walking Liberties, Peace Dollars, keeping the collecting grade about the same through each of those sets.... But his Morgans he always strived for BU.Ā He did buy a scad of 1971 Eisenhowers.Ā I can only assume that he thought it would be the coin to have as an investment, and you get the one chance.The grading in 1971 was F-VF-EF-AU and BU.Ā The images to grade from were poorly printed compared to today's hi-tech paper and digital sources.Then, in 1972, the federal government decided multiple things that would change his life.Ā The Federal Government privatized the Post Office and not wanting to gamble on his retirement, he chose to retire with a government pension.Ā This meant as a collector, he would really need to sharpen trading skills because their income was now fixed, and the savings that my grandparents had needed to last their lifetime.Ā It probably broke his heart that also that year, Nixon signed and released the GSA Morgan hoard.Ā He never bought one.The new alpha -numbered grading system soon followed, the groundbreaking Photograde published by the ANA, as well as the newish VAM ID's and publications were becoming more available.Ā By this time, his collecting by year and mint, graded by F-VF-EF-AU- BU, coupled with his age, it was too late in his mind to change course.Ā It is always nice to make a plan and stick with it to the end.My Grandfather's passed away in 1988. My grandmother was legally blind since the age of 45, but was very wise and loved by the town.Ā She sold some of the collections to those whom she trusted.Ā I never will forget her talking about the Morgans saying " He never did complete that set, he just wouldn't pay that much for a single coin!"When she passed, my mother inherited what was left of the collections. She had no interest in coins, just that they were hers now. I, on the other hand, gathered the things I felt were important to both my grandparents, her cookbook and his coin books, tally, and trade sheets.Ā These are treasures and I consider these as valuable as a coin, but isn't a coin's value only what someone is willing to pay when you come down to it? My images below are some of the resources he used for price, grade and trade. This generation had a reverence for books, never writing in them.ĀToday, on the 100th anniversary of the final Morgan and the first Peace Dollars, our resources are plentiful to complete collections.Ā We have instant viewing of coins and don't have to wait weeks for in the mail to know.Ā We have pricing updated constantly, not waiting for a newsletter or a monthly publication.Ā We can buy globally with ease.Ā You can gamble on stored bank rolls, but check the end tucks!My goal is the same as my Grandfather's, collecting goals don't seem to change, unlike gradingĀ and technology. Die sets have been extensively researched and documented.Ā I can peck away at the Mint-Date Set, the additional Major Varieties, and the Top 100 VAM's along the way.Ā I can't help but feel that sitting in the comfort of my home, "surfing" the web, feels nearly like cheating compared to what a mailman in a little town in 1971 was able to collect. I too am on the cusp of retirement as well, and I will need to gauge my buys, not knowing what my future will need. My wife of 40 years has been a trooper and a great source of sanity with my collecting. I know I will not be selling our sets, yes our sets, it's too personal.Anyone have an extra 93-S? Someone keeps stamping "COPY" and it's not funny...

Great memories are easy to remember!

Fantastic story. Love the blogs with personal history like this.

What a great blog! Really enjoyed the whole story and loved the photos! I too, have my Grandpas coin collection and a few of those old books. My Grandma was blind from age 60 or so...and when she passed away we cleaned out the house...You'll never guess one of the things I kept...her cookbooks! ; )

Very entertaining blog, things have never really changed for us numismatists, we are always striving to complete our sets while paying attention to our limited budgets.

What a great story. I love the list on the back of a cig. carton. You are right. We are still collecting the same coins. The way we find them and view them has changed but not the coins. I hope you are able to find your holes. I am disabled/retired and my wife recently retired. We are still able to collect but we are frugal, let's say. You can do it too. Thanks.

Enjoyed the blog. I still have some stuff from the 70's.

Great story! Funny my wife will have nothing to do with coins unless she can spend them. I had no one in the family who collected coins. I got into it after my accident. Traumatic brain injuy. My neurosurgeons told me coins might help my injury. One was a collector. Well I jumped in with both feet. It lasted a while but I have had days. Otherwise I would never of got involved with this great hobby. That's why I don't have famous books. Wish I did. You must enjoy them allot. Thanks for a great story.

What a treasure trove of information you have from your grandfather. Collectors certainly had to pay attention to their hobby then. My godfather was a collector back in the 60's and 70's as well. Wish I had inherited his coin books and records instead of his shotgun. Subjective grade was everything back then.

Thanks for sharing your story! What good are coins if you dont hang onto them? Keep collecting, my friend!