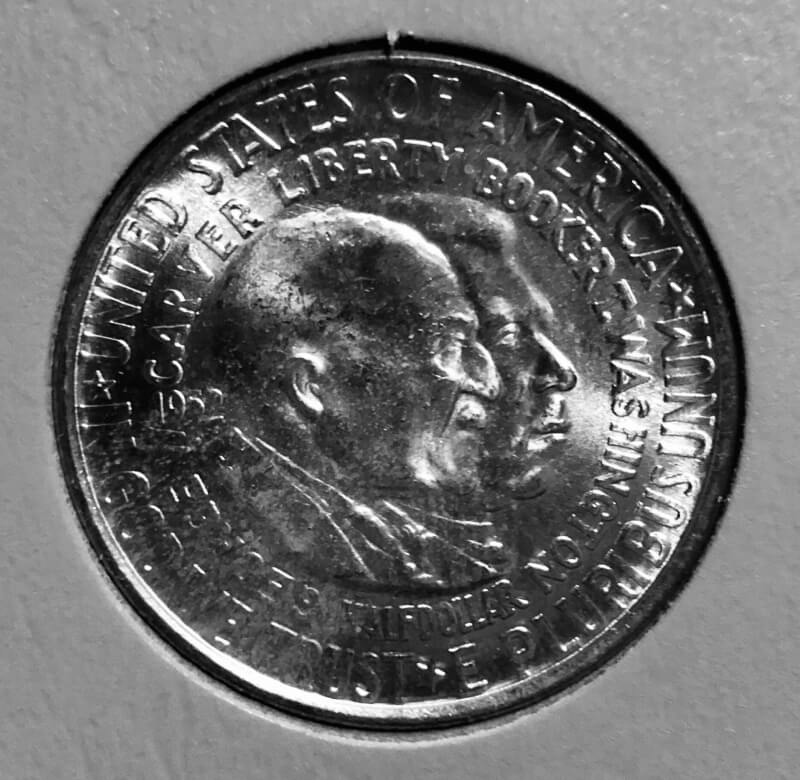 12 Oct 2018
The Carver - Washington half was destined to be the last US commemorative coin until 1982. The legislative background and sales practices of this coin probably had something to do with ushering in an almost thirty year drought in commemorative coinage.
The coin was originally intended to be a one-year issue, meant to commemorate the lives of George Washington Carver and Booker T. Washington. The 1951 coins were minted at all three mints, and were sold singly and in sets. When it sold poorly, the promoter took advantage of the McCarthy era anti-communist hysteria and convinced Congress to pass a bill authorizing even more coins (!) and changed the official purpose to use profits from their sale to oppose Communism. Needless to say, the gambit didn't work, and many coins went unsold. That didn't stop them from being minted through 1954. Many were placed in circulation, and mint bags languished in bank vaults for years.
The pictured coin, dated 1952, is actually from an un-opened mint bag that sat in a bank vault until the early 1990s. I had the pleasure of buying this coin from Bowers and Marena Gallaries, who had purchased the bag intact, in 1991 or 1992.
The story of early US commems is rife with scenarios similar to the story described here. To me, it is part of their charm. It makes this coin, and all the early commems, "story" coins.

Nice blog. I didn't know the history behind it. That does explain the huge gap in commemoratives. I favor classics like this one. Thanks.

I like this coin so much. Good story of how you came to own it. Designer Hathaway very under-appreciated.

A nice example of a classic Commemorative that anyone can obtained in a limited budget.

Nice looking coin! Interesting history related to this coin told here. I wonder if there are any other hoards in bank vaults. Thanks!

One of my first commen I ever bought I liked it right away since I know the history I will just Satan's for putting up beauty of a coin. I enjoy it very good blog on a great coin. Mike.

Probably some commemorative weariness after all the years of promoter shenanigans. I kind of feel that same weariness is present now.

Thanks. I think the collective wisdom regarding their failure was that the design was unattractive, but even more importantly the public had just moved on after all the sales gimmicks and abuses of the 1930s. I think I paid $19.95 for it, and thought it was a steal, especially knowing it’s origin, which I thought was cool. That would have still been enough to give a original purchaser a tidy profit!

That is a beautiful coin, and it would have been nice to get a bag of those for face value. Great history, but this design is quite beautiful, packed full, but beautiful. I do not understand how someone did not buy these for the little price over face value they sold them for.