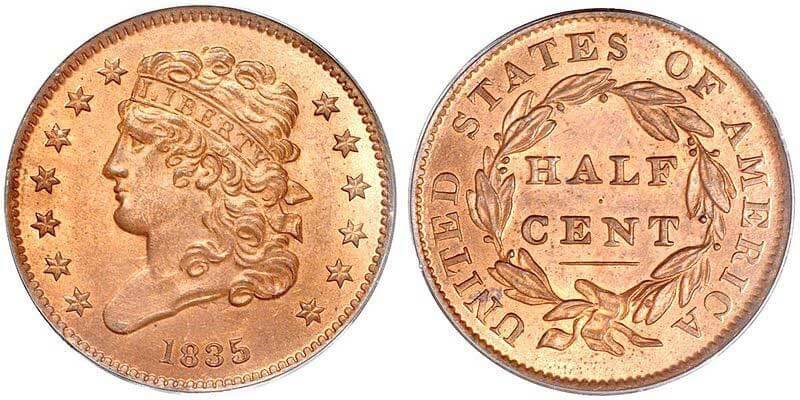 18 Jan 2018
Hello, this is my first blog, I figured I would start engaging this site a little more by posting some history of various coins, paper currency and possible tokens. Also if you would like more information, feel free to ask about the currency and tokens I feature, I would be more than happy to elaborate more on my knowledge for you! I hope you guys enjoy!
The half cent is the lowest face value coin struck by the United States. The designer of the coin is unknown but the engraver was Henry Voigt. This denomination of coinage was authorized on April 2, 1792. The original weight of the half cent was to have been 132 grams, but this was changed to 104 grams by the Act of January 14, 1793, before coinage commenced. The weight was again changed, to 84 grams, on January 26, 1796, by presidential proclamation in conformity with the Act of March 3, 1795.
The half cent featured 5 different design changes which included: Liberty Cap, Head Facing Left (1793), Liberty Cap, Head Facing Right (1794-1797), Draped Bust (1800-1808), Classic Head (1809-1836), and the Braided Hair (1840-1857) It was later discontinued by the Act of February 21, 1857. All coins were struck at the Philadelphia Mint throughout its production.
During the period from 1836 through 1848, coinage consisted entirely of Proofs and in very small quantities, causing a very noticeable lapse in the series for most collectors.

Welcome and thanks for the blog

Thank you for reading my blog! :)

Thanks for an interesting blog! I have never collected half cents but maybe I should reconsider! : )

Thanks for all the information. I think that half cents are really cool coins to have.

Thank you, I personally love half cents, mainly because they are unusual. The mass majority of Americans, don't even realize the U.S once produced half cents, just like the 20 cent coin (which I will be covering sometime in the future) Thanks for your comment! -Jeff

There not heard of that often. I don't know why. But they were made and are part of our history. Thanks for the information. Mike.

I think they just get swept under the rug if you will, sorta like how the Half-Disme, and the 20 cent coin are. Forgotten yet play a crucial roll in our country's history, and especially in terms of coinage. Thanks for your comment! -Jeff

I like half cents. They are overshadowed by large cents.

Large cents are cool, they are unique in their own way, but half cents just really hit a sweet spot for me. I love weird and interesting coins. Like the half Dime, and the 3 cent coin. Very cool and always fun to learn about. Thank you for your comment! -Jeff