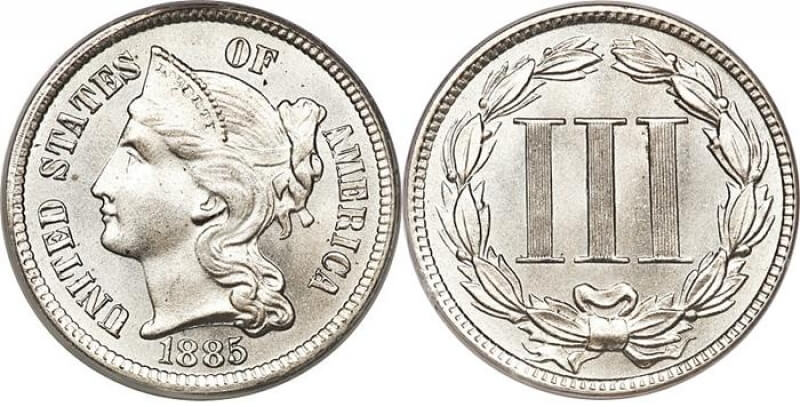 01 Feb 2018
The three-cent coin has an unusual history. It was proposed in 1851 both as a result of the decrease in postage rates from five cents to three and to answer the need for a small-denomination, easy-to-handle coin. The three-cent silver featured a shield on a six-sided star on the obverse and the Roman Numeral III on the reverse. The coin was initially composed of 75% silver and 25% copper to ensure that the coin would be considered real currency yet not worth melting down for the silver.
The coins were physically the lightest-weight coins ever minted by the United States, weighing only 4/5 of a gram and with a diameter smaller than a modern dime (14 mm)
The silver coins were known as "fishscales". The term "trimes" is often used today for these coins, but that was first used by the director of the United States Mint (James Ross Snowden) at the time of their production.
The copper/nickel alloyed three-cent piece was began production in 1865 and they depicted Lady Liberty on the obverse and the Roman Numeral III on the reverse. The three-cent piece was completely discontinued in 1889. There are a few theories to why these coins were discontinued.
One reason often given for the discontinuation of the three-cent nickel piece in 1889 is; the three-cent piece and the dime were identical in diameter, hence caused confusion upon the introduction of mechanical vending machines. Another factor may have been that in 1883, the Letter postage rate dropped to 2 cents, thus removing the justification for this coin. And the third reason is simply because they were generally unfavorable to use in commerce.

thanks for the history very interesting denomination

I like 3c pieces. The silver would be more of a challenge to collect than the nickel. When they are mint state, they are lovely.

Thank you! I appreciate the time you took to comment!

I like the "Trime", but they are always pretty expensive. Enjoyed your blog and photo's. Thanks!

I personally enjoy the Nickel three-Cent piece. They are realitively cheap to collect. (A solid Good-Very Good collection can be completed for around $1,800) and an MS-65 complete set can be easily obtained for just around $6,500. Which is really not that much compared to a lot of other series.

Thank you! I take pride in highlighting every coins' history I feature on here with plenty of research and hopefully to spark some interesting conversations about the coins themselves! I'm glad you like the blog! Thanks for commenting.

Nice research for your blog. One of the few denomination where a coin was struck in the same year in two different metals.

Thank you so much! I'm glad you found it an interesting read! And yes, not very many coins were produced with such different alloys in the same year.

America really didn't take to this coin. The people will let you know real fast. I like them but never collected more than a few y o ur reason are also part of it. Thanks for the blog and history I enjoyed it. Mike.

I think they are a realitvely good coin to collect! Especially the nickel three-cent piece, because they are very easy to obtain on a budget. Plus they are a very interesting conversation starter. It's a real shame we don't have denominations like these anymore, I think it would so cool to have an 8 cent coin. But on the flip-side I like the base 10 system we have today! Lol