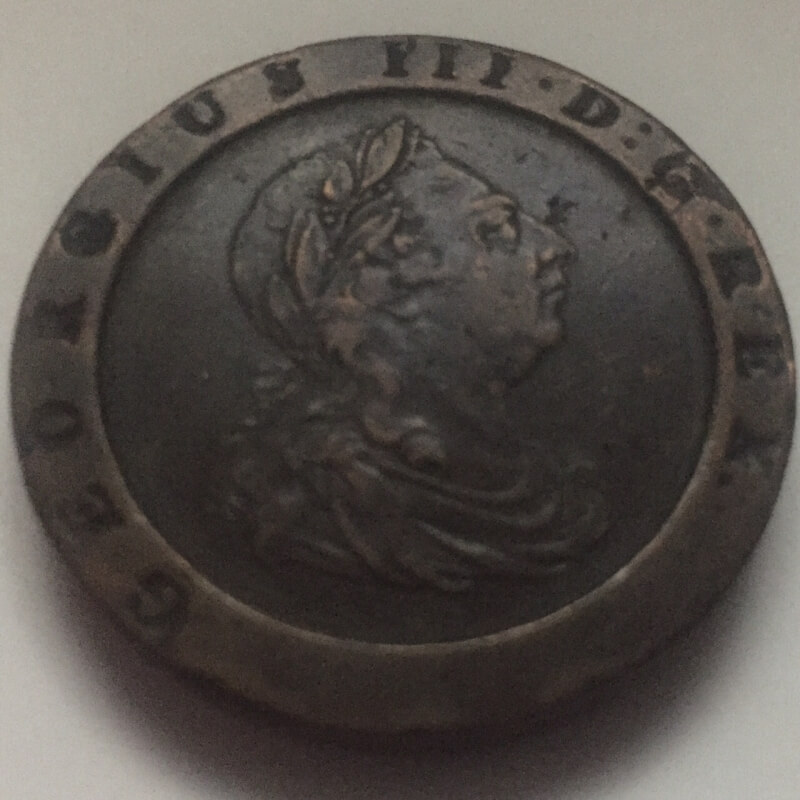 I recently went to my local coin dealer to find something nice for my collection, when a large copper coin struck my eye towards the bottom of my dealer's case. He took it out, and told me about the coin. The coin you see attached is the coin he was talking about, a British two pence coin from 1797. The reason I'd like to share this with all of you is because of the same reason I've studied numismatics for quite some time, and most of my life, which is to explore and preserve history in a much more meaningful way than textbooks or the occasional speech/lecture on some facet of history.

The coin was only minted in 1797 and mintage was relatively low (north of 700,000 coins) to begin with. The coin is two ounces of copper, to meet with the specifications of intrinsic value, (two ounces = two pence) and this was possible because of the amount of copper the United Kingdom had at the time.

The reverse is shown below, with Britannia seated holding an olive branch and a trident in each hand (much like the US's famed eagle on the $1 bill reverse holding the olive branch in one claw, and arrows in the other) with a Union Jack shield and a ship sailing by. On the raised rim around the perimeter, it says "BRITANNIA" and the only date the two pence was minted before decimalization in 1971, "1797".

The obverse below shows a bust of King George III, with "GEORGIUS III D G REX" around the rim as well.

The coin is called a "Cartwheel" because of the flat rim around the large circular coin, which resembles a cart's wheel.

The coin was also one of the first coins to be minted using steam power on a steam powered press. The designer and British steam power pioneer, Matthew Boulton, struck the coins at his Soho factory and stopped minting them at the end of 1797.

What I find mostly interesting, is in one of the World Coin grading books, that the difference between a F and VF grading is $150. The coin I have was sold as "Fine" but I believe that it could be "Very Fine". As I am not as welled versed in World Coins as I am in US Coins, I can't say for sure, but if anyone here does know, a comment would be much appreciated.

I encourage you to read more about the two pence on these sites that I give credit to for some information used to fact-check.

So did you ever get it officially graded? How did it grade?

I'm sure big old copper coins took a lot of punishment. I saw one years ago.

Cool Coin Topp, I always like to those those coins from the late 1700's - Always makes me think about what was going on then - I like the idea that it weighs 2 ounces - that is some weight !

They are hard to find in good condition. But you can find them. They were very popular.

Thank you! If it had been pretty much any U.S. copper coin, I'd be able to tell. Do foreign coins and their collectors use the Sheldon 70 scale as well?

No I don't believe they do. Only here. Other countries have there own definition. Like fine good very good that type. England I think goes to a a higher number. You can send any coin from any part of the world to any of the graders here n the U.S. mike

A very nice coin. Hard to tell by pictures alone. F / VF. Thanks for the history on the coin too.

In my opinion Fine is probably right on the mark. It's tough to find these in high grade. It doesn't seem like too many were saved at the time.