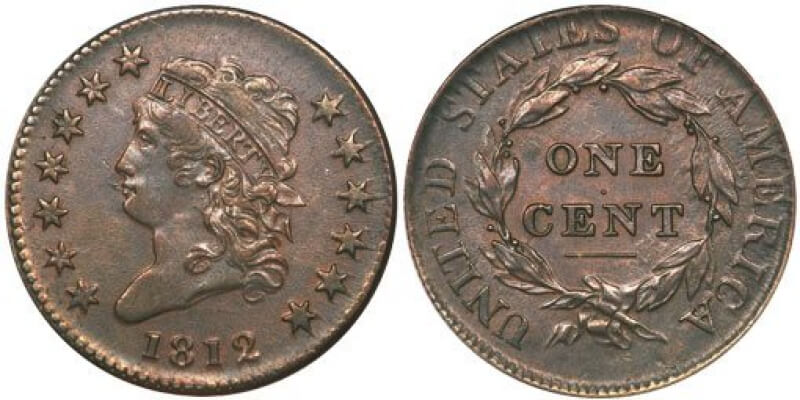 January is a month where as collectors we begin new things, largely from New Year's Resolutions we've made pertaining to our hobby. Like most of you, the first  weeks were spent adding a few missing coins or sets to finally complete a series run many years in the making before delving into something new. In the process, sorting through and looking at the many beautiful specimens amassed over 49 years I stumbled across a coin which instantly became the subject of this weeks blog.  The Classic Head Large Cent.                                       Enjoy!

Those of you following and reading my blogs over the past years may recall that I rarely bring myself into the subject, only a few times for relevancy to it. This would be one of those exception and only as a precursor to the subject it's self. In the opening I mentioned "a coin", meaning literally that, the single date which I have of this design.  A date chosen for it's historical significance and importance, the year 1812. I bought this beauty, a nice chocolate brown, leaning a touch towards grey, in what I'd say is a solid F-15 based on my trusty Making the Grade book. However, and extremely reluctant, the image depicted is not of the specimen I speak as my photographic skills only render a dark and unreadable round blob. To that end, I'll mention the owner at the conclusion.  With that, looking at this coin and reflecting I believe I will add the final two years of this design as it was the years of our Second Revolution- The War of 1812. Simply the best design of the Large Cent, in my opinion.

The Large Cent was first struck in 1793 with it's final striking occurring in 1857. This makes the one cent the longest continuously struck coin, missing only one year. Of the six designs, by five different engravers, having several modifications within each, and countless varieties spanning half a century.  Also of importance, the Large Cents were only struck at the Philadelphia Mint.  In the event you are curious, those engravers/designers were (in order) Henry Voigt, Adam Eckfeld, Joseph Wright (modified the Draped Bust design), John Reich, Robert Scot and Christian Gobrecht.

In the early years of the United States Mint, a young nation was in the midst of establishing a working government and all the things associated, including the production of it's own currency.  As such, not to mention having to pay for a war not long before, what little finances available were tightly budgeted  accordingly.  To alleviate financial short falls from the government, and the short supply of precious metals (which at the time, copper had been), copper planchets were imported and struck into coin. That supplier was Mathew Boulton of Birmingham, England.  Beginning in the early 1800's, 60 tons of copper planchets were shipped to the United States between 1807 and 1811, the final shipment arriving on April 15, 1812 as hostilities began breaking out between the two nations.  Looking at the mintage totals of the first five years, 1808-1812,  it's odd that they began at just over a million, dropping to roughly 200,000, back to 1.5 million then again to the 200,000 range before another million the year war broke out.  While there doesn't appear to be a reason for this anomaly,  the totals of 1813 and 14 are clear as to the war being a major factor.  Where things really get interesting is the year 1815 when no cents were struck bearing the date. However, according to the official mint records, cents were struck in 1815.  Peace negotiations had begun in August of 1814 and finalized with the signing of the Ghent Treaty on December 24 of that year.  On October 27, the U.S. mint had delivered the final 357,870 cents from the last remaining planchets available and dated 1814.  With war all but over, sometime in late fall, another 5 tons of copper arrived from Boulton & Watt.  Where things get interesting: the cent was yet again in the process of a design change for 1816 to the Matron (Coronet) Head. The 1814 has two distinct die varieties, the plain  4 and the crosslet 4. We know that, according to mint records, plachets were not only available in late 1814 but again showing in 1815, which indicate that the mint did not remain idle during 1815 striking the cent denomination.  Is this the reason for two different styles of the 4 in the date? Several experts seem to think so. But why not dated as such? True, that in the early years of the mint it was common practice to reuse dies from one year to the next, yet nearly a full third more of the plain variety.  What ever the case may be, technically speaking, the cent has been continuously minted from the beginning.

And now to the image. I wish to acknowledge and highly recommend classicheadcent.com. This website, which is free to use, is a great site for short information on a number of U.S. coins.   Some great reading here.

I am also fond of the Classic Head Cent. I have a PCGS VF-30 1814 crosslet-4 in my collection. Therefore, I am most intrigued by your theory attached to the crosslet-4 variety.

A very fascinating read, thanks!

You made an excellent run down of the interaction between the national condition and the montages of these early Americans. That is on of the things that made them unique, is the supply wasn't guaranteed and things went wrong sometimes. The background to this, as well, is that much of the country was agrarian, so that relieved much of the pressure on the money supply issues... unless you were in Boston, NY, or Philadelphia :)

A great read. Thanks for the blog I really learned a lot!

Thanks LB, I really enjoyed this read.

Great blog! Yours are always so interesting ; ) Nice photo too! Enjoyed it! ; )

Great essay and reference . Having a 1812 coin is a powerful piece of history . You are lucky . I like your words because they come for the coin as fixed in your thoughts .

What an enjoyable blog. I learned from you. Nice photo. I like you sourced even the photo. I agree with your reasoning on the date you bought. Thanks and good luck.

I agree with Mike. As always, your post is well written, informative, and interesting! I especially enjoyed this one because I recently picked up a Matron head for my collection. Thanks again for sharing!

Very nice reading and information. Now I want to buy one of these old classics. New year resolution on coins for myself is still open. Maybe see you at the May PAN show? I hope to attend again regardless if our coin club has a table.

As always a great read. A real blog!! I enjoy reading your blog because I always pickup something. Something about the coin or the history . And its not three lines. Your picture is fine. I can see all the detail. This coin is truly a part of our history. Only the Fugio came before it. They worked with Matthew Boulton in Britain on these. Thanks allot. Again I learn.