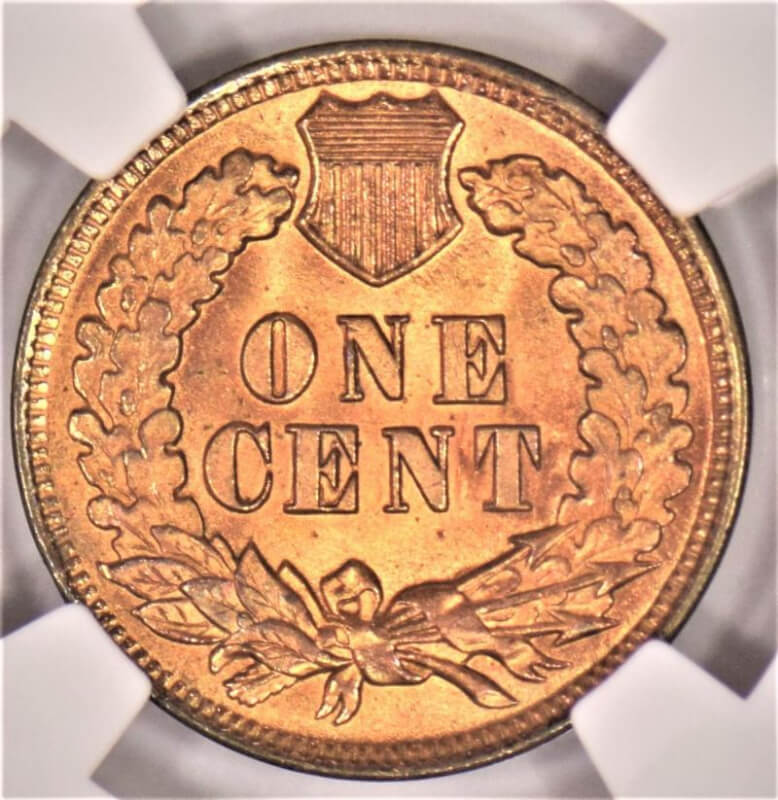 The Lincoln Cent is the number one collected denomination by series. The number of reasons as to why are quite possibly  equal to that of the entire wheat-back design. No matter what that may be from a personal perspective, with almost certainty it has lead towards other denominations and series. For the budget or financially taxed collector the choices narrow considerably. One series, complimenting the Lincoln to near perfection is the Indian Head Cent struck from 1859 through 1909.               Enjoy!

To understand how and why the Indian Head came to be a look at James B. Longacre's first coin of the denomination the short lived Flying Eagle Cent.  With the cost of copper rising to near face value of the Large Cent struck from the earliest years of the mint, a change in composition seemed an appropriate action. Combined with a smaller size which the public hinted at as the large size coin was cumbersome, taking up space in one's pocket. From the beginning, being of 88% copper and 12% nickel, trial and circulation coins of the new cent proved difficult to strike. Whether from nickel being a much harder metal or the smaller size, perhaps a combination, with the public enthusiastically accepting and spending them, the mint's assumption was that a solution could be found. The reality of these new bronze "white cents" as they were known due to a much lighter shade than the previous pure copper Large Cent became understood by 1858. Just one year after being released into circulation, Longacre began work on patter pieces for a new design, the Indian Head. The Indian theme was carried over from the gold coinage of his design in circulation, albeit modified to fit the cent's size. The obverse based on the Greco-Roman statue Venus Accroupie and supposedly using his daughter Sarah as the model. The reverse bears a bow tied oak wreath with "One Cent" in the middle.

By the following year, and using the same composition, the new design proved much easier to strike. Public approval far exceeded mint expectations as a whopping 36,400,000 were produced along with an estimated 800 proof strikes destined for collectors.  This would be, however, a one year issue as in 1860 a union shield was added between the upper break in the reverse wreath. Perhaps in part due to a growing concern of national separation brought on by southern states grievances against northern.  As a result of the growing conflict between north and south, both began hoarding gold and silver to levels nearly depleting vaults as few if any circulated. At a time when the American public expected their coinage to hold intrinsic value, which the cent held little, the Indian Head continued it's popularity based on size rather than value. The mint itself arrived at the same conclusion as production figures held steady as they circulated frequently. Gold and silver had now been more or less none existent in  circulation and the mint all but ceasing production of precious metal coinage not willing to create personal fortunes. As such, the small cent could no longer be excluded following a decision by banks in New York to suspend species payment of precious metal coinage  on December 28, 1861. From that point onward, bags of cents were hoarded.  Even so, the inconceivable had little affect on production as millions were still churned out. Rising from 10,100,000 for the year to 28,,075,000 in 1862.  Despite the high mintages, and while they had circulated, shortages were common. This gave rise to civil war tokens and store cards, coins struck by private firms and most commonly of a patriotic theme, which were becoming more frequent and acceptable as payment. Which is odd in that the Philadelphia mint struck a record 49,840,000 in 1863 and dropping by 10 million the following.

1864 was a transitional and interesting year having three major changes occurred which carried on throughout the series. The most significant being a composition change of 95 % copper and 5% tin/zinc since nickel had both risen in cost and was needed for the war effort. A composition unchanged until the 1982 Lincoln Cent. These new bronze cents were also thinner and lighter, down from 4.67 grams to 3.11, not to mention noticeably darker in color than previous issues.  However, some copper-nickel were also struck during the year. The greatest change, as far as collectabillity, came with Longacre's initial being added to the headdress ribbon of the obverse. "L" cents as they are known a rarity with an approximate 5 million of the 39,223,714 total mintage. For some as yet unknown reason, a large quantity of "L" cents were sent to London, England as evident from the many recovered in the 1950's and 1960's.

Production figures of the cent  finally equaled those of gold and silver during the war years by 1866. With the war over and hoarded cents being returned into circulation as they were taken, by the bag full, the total struck plummeted to under ten million. To get a sense of the number hoarded, these figures remained low not reaching previous levels until 1880.  Aside from the 1864 "L", the highly sought after 1877 is key with a mere 852,500 struck. With exception to the 1908 and 1909 being struck at San Francisco, all Indian Heads were from Philadelphia.

For those who love Lincoln's, these somehow stand out above in full red.   The pictured 1903 MS64 BN, in my opinion, is under graded in hand.  Should be a red as it's almost on fire. A stunning example.

One of my favorites. Great historic blog. Lots to learn here. Thank you.

Those are some beautiful coins, I love this design! They were first called nicks or white cents, an dman were they large for a "small" cent. Thanks!

A truly beautiful coin in uncirculated condition. I rank it in my personal top 10 of U.S. coin types.

Gotta love these beauties! Thanks for a great blog! Cheers, NM

As a younger collector the go to seemed to be the lincoln cents for me. But adding in flying eagle and indian head cents really brightened things up. My solution to not being able to afford to collect the other larger denominations is to start a type set. Great blog!

I resemble Stumpy's remarks! Those look WAY better than my Flying Eagles. I also agree with your summation on Mr. Longacre's vision of these coins. Thanks for sharing your expertise buddy! Great post.

Great coins. Don't have any certified Indians myself. Nice history back when the Indian cents were in circulation.

Those are some beautiful coins. Wowser! Indian Head's were always my second favorite coin. Thanks for the walk through and the photo's those are awesome! Later!