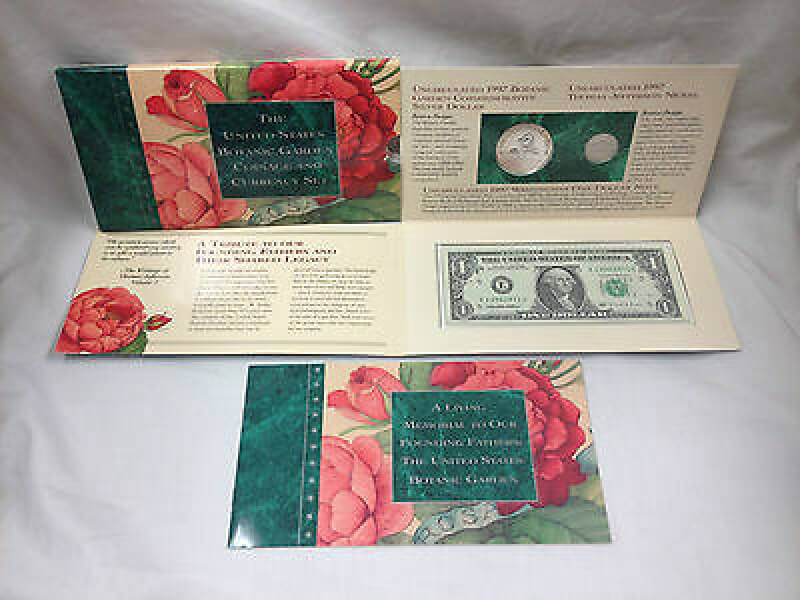 As I set at my desk enjoying both Irish coffee and the view of a beautiful azure blue morning sky outside the window, I found myself pondering on this weeks blog topic. Following several minutes of looking at the new green buds, the purple plum trees and forsythia beyond I remembered that coin set I have tucked away not far from reach. Pulling the 1997 Botanical Gardens coin and currency set from the darkness of it's resting place within the cabinet I now have a topic for this weeks posting. I hope you will enjoy not only the subject but the day before you as well.

I would think it safe to say that when it comes to deciding on a commemorative coin the United States Mint doesn't always have a good idea. Meaning, the subject matter behind what they issue. To be sure, most of them are proposed. Others are deservingly chosen in true commemoration. Yet on occasion, like the set in question, there seems to be no clear reasoning. No proposal from a group or individual. Which, despite the many failings and flops over the years, is not a bad thing. Case in point, this set.

The 1997 Botanical Gardens set, with a mintage limit of 25,000, went on sale February 21,  with an issue price of $36.00. It included a One Dollar silver commemorative, a matte finish Jefferson Nickel (the only way of obtaining such for the year) and a One Dollar Federal Reserve note. Unlike today, and with no household limit, orders could only be made by mail and honored based on their postmark. Just as today, these sets quickly reached sold out status within the first week.  This is the point at which things become perfectly clear, or at the least from my perspective, at the inner thought of the Mint. In the years prior to 1997, the commemorative program exploded with issues. Particularly the Olympic years. Not having any concrete idea, the botanical set may have originated due to the close proximity to elected officials in Washington DC in Congress responsible for passage of coinage law. The special finish nickel, on the other hand, was that of the Mint. So, with sales slumping after a successful series, then Mint Director Philip N. Diehl later reported on the performance and philosophy of creating unique and limited edition products as confirmed in the secondary market. Those are his own words, not exactly as quoted, in an article which I stumbled across while researching todays subject.  As I read his words I reflected upon the current proof sets and coin programs which are falling as they had in previous ones with the inclusions of West Point issues. The old saying is true, history repeats itself. Again, this is by no means a bad thing. Rather the hidden meaning, or agenda if you will, of the United States Mint.

My person thoughts and occasional frustrations aside, overall the mint creates some of the most beautiful coins in the world. Creating limited number products is essential to keeping our hobby alive and thriving. As for the set discussed it's one of my favorites. Thanks for reading!

Wow I had never seen this set before!

It does make you wonder how they decided on this set. Three pieces that seeming do not belong or relate to each other.

Wow! Now I want one of those! Those coins are beautiful!

Great set to have. It's toning very nicely. I like that. Thanks..

Well written post Long Beard. I love the nickel set also. It's a beautiful coin like the weather we are starting to experience. I was just wondering, do you really think the Mint has a hidden agenda? I've also wondered who makes the decisions there. Is it the Secretary of the Treasury? Anyway, thanks for the post ! I didn't even know there was a Botanical set, so consider this my numismatic lesson for this week. Thanks again !

Perhaps "agenda" needs rephrased. What ever the process we collectors aren't always in the loop, so to speak.

Nice set to have in on's collection. I look at mine every so often

Nice set for 36 dollars and now the nickel listed for around 500? Low mintage sets are great. Thanks for sharing. Hope too see the botanical garden in my backyard show so growth soon.

I tried ordering one back in 1997 and didn't get it. Luckily I bought it at the Spring PAN show, for $65 I think?, before the price skyrocketed.

That nickel is rather attractive with its finish. I may look into getting one of those. That Botanic garden design is rather plain a building on a coin rarely works. I think the best building design on a modern commemorative is the Smithsonian Dollar, probably because the building itself has interesting features, like Mike B's Conder Tokens.

There was also a matte finish in the 1994 Jefferson Set, which I also have. Unlike the '97 the mint failed to say that it was included as a limited edition. Collectors scrambled to find these when they became known not long after a sell out. When the mint released those P mint mark Lincolns in 2017 I immediately recalled this set.

Hi . I also bought the Botanical set . I love the nickle matte turns a light gold or blue. There beautiful. Even the one dollar coin and note. It tells allot about our history. .The nickle.is underarated . 25,000 made. The red book has it Five hundred. Last time i checked. Great blog on a must have set. I look forward to them. I bough two sets and sent one in the other never opened. That Matte finish is so beautiful. They dont use it on a lot of coins.