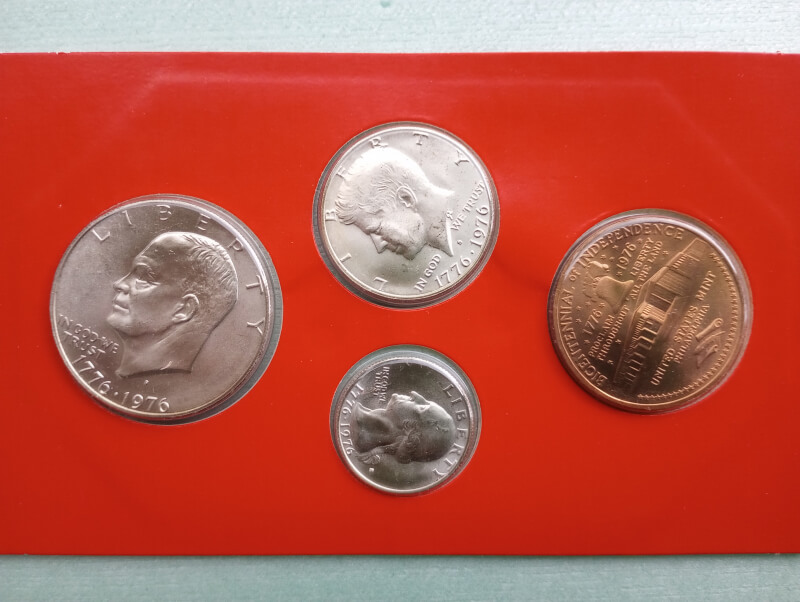 For sometime now, it has no longer been customary to call myself a coin collector, rather a hoarder of shiny round metal discs. On occasion even us seasoned hobbyists  find something  new when we thought otherwise. Case in point, the 1976 U.S. Bicentennial coinage. The subject of this week's blog.   Enjoy!

The designs for the three 1975-1976 coins (the quarter, the half and the dollar) encompassing the commemoration of America's 200th anniversary, until recently I had thought I held every product offered by the United States Mint. From the uncirculated mint set, to the silver and the various configurations they were made available.  For those unaware, the United States Mint issued what are called souvenir sets, available only from each branch mint through their respective gift shop. Each having a much larger, in between the half and Eisenhower in size, medallion representative of said mint. Issued from 1973 through 1998, these medallions replaced the dollar through 1981.  Being as I've had both years of these sets, Philadelphia and Denver, I discovered a two coin Denver set- having only the quarter and half but with a San Francisco medallion. Immediately my interest was piqued to say the least. First, since San Francisco did not strike circulating coinage-  which mint sets are representative of- they should not be any. So why, and especially  in a Denver set of which obviously should be a Denver medallion?  Being that it had no envelope, and the seller (EBAY) listing it as "unknown set", a quick search proved that it was an ANA set issued in 1976. So again, scrolling through EBAY, I quickly found several others with their accompanying  envelope. Of which all are slightly above what I feel a fair price, so for now it's without. Second, and why I really bought it, was the stunning tone both the quarter and medallion exhibit. I need to learn better photography!

In the quest of knowledge to the former, I also discovered the ANA three-coin set. Again, not knowing they ever existed.  Once more, Google showed that the 85th ANA convention was held in New York City, and this set includes the Philadelphia issues with medallion. Which seems proper. So to reiterate, why the two-coin with a San Francisco medallion?  I have yet to discover that bit of information. Perhaps one of you know?  Finally, the 1976 souvenir sets have a one year only Bicentennial themed design medallion where all others are identical. These in themselves are collectible within a small sub-group.

Updated- With all of the interest, I felt the need to clarify what the Denver issued set looks like and made available to the general public only through their gift shop in Denver. This would be the image showing both obverse and reverse in the same shot.

I believe the '76 Denver medal for the Colorado Centennial was the first medal struck at the Denver Mint.

in 2026 we will be celebrating the Semiquincentennial (250 years). The US Mint will be issuing some special coins. Probably they will offer some of them in sets. This will increase interest in the Centennial and Bicentennial coins. Thanks for showing us these coins medals and sets.

I believe it already has stirred an interest. I'm curious myself about the multitude of private medals struck then and in 2026. Probably not, or at a minimum.

I looked can't find one. You have the luck of the Irish!!

LB, Iâ€™ll join the sentiment, that this is great stuff! And, as others have said, sets I did not know about. Interesting that the branch mints sold separate souvenir sets for bicentennial coins, and the ANA sold sets as well. Definitely peaked some interests on this blog. Thanks for the info.

Thanks for the replies. To my knowledge, both of these sets were sold by the ANA. The two coin almost certainly an ANA exclusive and available through the club's membership, or perhaps only sold at the convention in New York City. The red cardboard set is identical to the souvenir sets of 1975 and 76 from Philadelphia, only the outer envelope is exclusive to the ANA. This one, I almost won personally signed by Mary Brooks. Even bidding a nice premium there's still a great interest in the Bicentennial designs. I'm still researching the two-coin as it's so mysterious.

That's an interesting and plausible answer, user_9073. One I hadn't considered. At least for the three coin set, but not the two-coin as all Denver sold sets include their own medallion.

LB, I am wondering...could the set in the envelop with the ANA cancellation be a mint gift shop souvenir set that had the stamps added at the New York ANA show.?? And then cancelled at the USPS booth at the show? I know a few year ago at an ANA show in Atlanta so people got Stone Mountain gift shop items and added numismatic related stamps and got the special USPS cancellation for the show. Just wondering.

Fabulous blog, loved that poetic que of not calling yourself collector. It seems we tend to discover many new aspects of ourselves while we also discover new coinage. Sets kaunched at specific ocassions are trendy still even those launched in the near past. American social history is brought forward too thru each set, thu each coin, and we are all part of that socio-economical tapestry. Keep setting up your sets and your good taste.

The medallion in particular was why I bought the set without an envelope, gorgeous sunset shades that I fail to capture with my camera.

I too never knew of this set. I hope to never stop learning. Thanks. These are awesome.

I'll stop learning when I'm on the other side of the grass!

Thanks for this wonderful blog. The mint made many different things from 1975 on. I have a medal with the date 1975. This set I did not know of. One it was before my collecting started. Now I have to go look for this. Its refreshing to read about a set that most of us didn't know about. Thanks for bringing this to our attention! Great as usual!