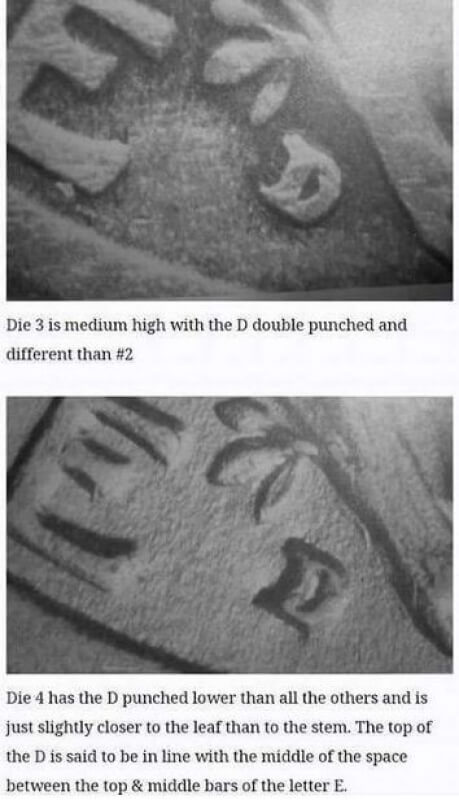 The Mercury Dime was minted between 1916 and 1945 and was designed by Adolph Weinman (1870-1952).  Also known as the Winged Head Liberty Dime,  Weinman is believed to have used Elsie Stevens as the model for the obverse of this coin. The key date to this series is the 1916 D with a mintage of only 264,000, how many have survived to this date is unknown, but there are many fakes or counterfeits out there to be aware of, and they far outnumber those that have been lost, missing, melted or otherwise. It is entirely up to you to take the chance on buying one raw.. With any key date coin it is always wise to buy one authenticated by one of the top TPGs.  If you know how to detect a fake and you have a trained eye for these things then you know what you're doing. As a novice, I wouldn't suggest spending the money to buy a key date raw....unless you know all of the things to look for.  There are tooling marks and die varieties and 4 different mintmark placements that you must look for with a loupe. (photos below).   There was four dies used for the reverse of the 1916 D Dime also....You should study those and know what they look like.  Before I dive into spending a lot of money on a key date, I buy a book on the coin and/or I read the info online from a reputable web site such as NGC, PCGS  or ANACS.  The values of the key dates in any series keep rising.  Can you take a chance on an expensive raw coin for a few thousand dollars only to find out years later that its worth nothing?   In the Virgil Hancock/Larry Spanbauer book "Standard Catalog of United States Altered and Counterfeit Coins"  it states how many of these 1916 D Mercury Dimes were counterfeited including "Sandwiching" which means putting a 1916 Mercury Dime from Philadelphia on top of a common Denver "D" minted coin and fusing them together.  There have been individuals that worked at the Philadelphia "factory" (as they put it in the book) who have altered the coin there by creating the "D" by melting and forming a "D" on the reverse, which is called "chasing" because you're "chasing" the silver around and forming a "D" into a mound to look like the desired mint mark.  Another way to detect a counterfeit coin is by the tooling marks (photo below) especially around the inside rim and around the mint mark. There are many stories of old widowed ladies cashing in on her deceased husbands prized collections to only lead to disappointment.  Its hard to tell how many raw 1916 D dimes are stuck away in old albums .  I hope this blog has informed you and at least entertaining.  The reason I wrote this is because I just bought one of these myself....authenticated by PCGS of course.  Thanks for reading

P.S.  The photo of the Top/Bottom of the 1916 D Mercury Dime is the one that I purchased.

Excellent informative blog. A beautifully designed coin it has been sought by many Worldwide. It would be nice to have such an artistic design again for the current dime since it is a coin that has not changed much for quite some time. Many collecting houses and evaluating firms placed this dime top if their lists when it comes to exchanges and/or auctions. Thanks.

Nice 16-D Mercury Dime. My 16-D Mercury Dime is graded AG-3 by NGC. At the time I bought it, I thought about putting together a complete certified set. Instead, I ended up with a complete set of raw coins, less the overdates, mounted in an intercept shield album. The 1916-D is the only certified coin in my set.

My first one was an G04 graded by NGC. I sold it about 10 years ago and swore I'd have another one someday. The rest of my Mercury dime set will also be raw. I had the entire set once with many other sets that I sold. I hear the Intercept Shield albums are nice.

My 16 d is a lowly ANACS VG8. Love those Winged Liberties!

Nice coin. I don't have one, but should find myself one.

Thank you! I figured that I should pull the trigger before they get out of my price range.

Kevin. That is a very nice grade XF. Also nothing wrong with a details grade. I have a few I would never have been able to afford as a not details grade whatever. Things like gold coins. Expensive stuff. I feel most old, 100 years and more, coins have been cleaned. It was the correct thing to do back then. That dime must have been cleaned way back. It is starting to tone. NICE!!

Thank you....and I agree. Cleaning coins back then wasn't as taboo as it is today. When I started collecting in 1979 my coin dealer even stocked a coin cleaning kit...two little brushes which had wire bristles and a small bottle of cleaning solution. Back then you didn't have internet and there was nobody to discourage you from it. It looks as if my dime here may have been dipped as there are no swirly hairline scratches from a cloth. I don't mind it either on a coin as expensive as this...like you said..sometimes this is the only way to afford them in a higher grade.

That is a great blog Kevin. I congratulate you on your pick up. If I may ask, what grade did that beauty receive. It look very nice. Expensive but worth it to us coin wonks. wouldn't you love to own that beautiful toned example? I know I would. Any authenticated one is a great deal. I was told by a teacher at Summer Seminar that he asked a mercury guy to go see how many raw fakes he saw at this particular show. He came back with an answer, "ALL". Thanks.

Thank you very much. Unfortunately the previous owner only sent it in to PCGS for authentication and not grading. The dealer who I bought this from gave it an XF at best. The coin I bought had been cleaned in the past...I'm almost anxious to send it in for a grade when I get it....just to be curious.

Well congratulations! Thats quite the coin. You treat that with respect it will be in your family generations. What a great buy. I know allot of people who would love to own that beauty. Terrific history on it . Well done. It looks real nice. You and Andrew will enjoy this. I enjoyed the blog. The history. I don't know how many are still out there. I think it's time for me to pick one up. . Some look really bad. Others are really good. There is one in ebay for.275,000. It has it C.AC. If course. I don't remember I think it's a M. S 67 just in case you need another one! Take care be safe way hellow to my friend. .

Thank you very much Mike. It will certainly be handed down through the family. I'm proud of this purchase myself. That one one Ebay is a little too much for my pocket. Haha. I told Andrew hello for you...he's watching TV. ðŸ˜Š

My 16D is one of my favorite coins, it took awhile but I found one in an NGC slab that did not destroy the budget. Great advice for the future buyer. Bottom Line, do your homework.

Really enjoyed your blog! I too love Mercury Dimes and am so happy for you with adding the 1916 D to your collection! I also have one and it took awhile to "bite the bullet" and purchase one. Great advise about authentication! A must for a coin like this. ; )

Wow, what a great buy! Another important measure for authentication is to check the style of the mintmark. Few to none of the embossed or sandwiched "D" additions where of the correct style, and can be seen under a standard scope. Tooling marks are equally important. What beautiful toning on that coin. I am assuming that is a stock photo, and not your new acquisition? If that is the beauty you bought, you must be one heck of a proud owner! I also must say, you stepped on my numismatic nerves a bit with your opening sentence, and I simply must say the following (; Weinman did not design a portrait of the Roman god, Mercury. In fact, it was not even a bust of a male at ALL!! While the wings on LADY Liberty do resemble the Roman god, Weinman used this allegorical symbol to represent the freedom of thought. The wings are symbolism of freedom, and her Phrygian cap is a symbol of liberty. That fact that the wings are placed on the cap, which is on her head, sends a combined message of the freedom and liberty of thinking. To call it a "Mercury" dime is an insult to Weinman's intentions behind the piece. Thank you for tuning in to my numismatic rant (: Haha, thanks for the blog! I love the Winged Liberty Dimes SO much, and they are a fascinating coin to attempt to uncover the symbolism in the design. I cant wait for the next one! -NM

Haha, dont worry about it, my friend. Its just an excuse for me to reguratate some of the numismatic knowledge thats crammed away on my mental hard drive (;

Thank you Numismaster.....unfortunately the exaple above is not the one that I purchased. My apologies for not being thorough ...My disability prohibits my concentration and comprehension sometimes.