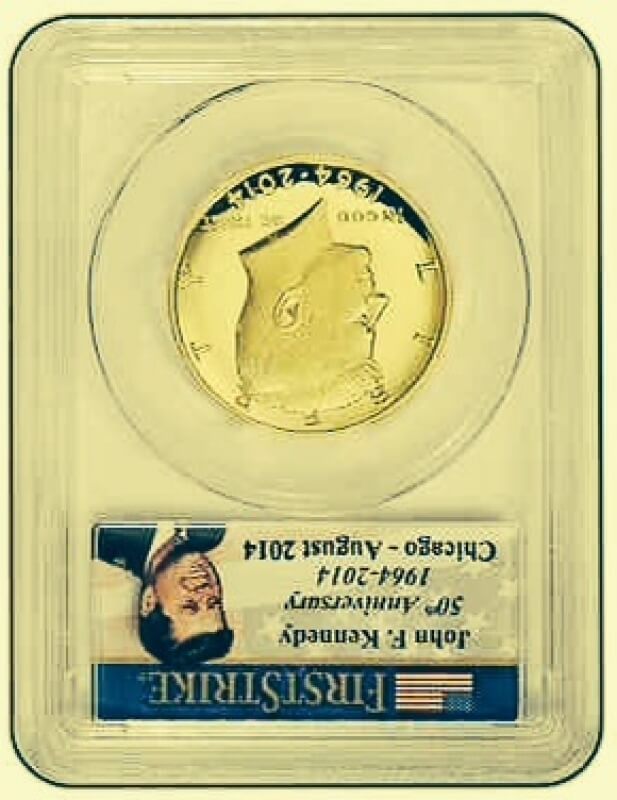 PLEASE NOTE: The photo accompanying this post is upside down and urine-colored intentionally. The upside down picture is in observation of the international distress signal. The urine color is to indicate that I am p1$$3d off about this breach of ethics. PCGS no longer meets my ethical standards, and I am finished with them. All my PCGS coins will be crossed over to NGC over the next few months and years.

Charles Morgan at CoinWeek.com has "done the math". There are far more ANA-Chicago slabbed gold Kennedy half dollars than were ever sold there - [data updated] more than 600 more! Now think about this. NGC, the ANA's official third-party grader, required all ANA Inaugural Release slabbed gold Kennedy's (and the clads, too) to be accompanied by an original receipt proving purchase at the show floor US Mint booth. There was a code on all receipts proving the provenance. So we know that any show slabs from NGC had to be proven as to the source of the coin. PCGS had no such requirement. We do know that just short of 1,500 gold Kennedy's were sold at Rosemont. CoinWeek reports that NGC (again, with source proof) slabbed 1,136 of them and ANACS slabbed another 30 (also with source proof). That leaves a MAXIMUM POSSIBLE REMAINDER to have been slabbed by PCGS of 1500 - 1166 = 334, and that's only possible if all 1500 allocated were sold (they weren't), and ZERO went unslabbed (not nearly true).

Guess how many ANA-Chicago slabs PCGS did. Go ahead, guess. 947! That's 947 out of a MAXIMUM CONCEIVABLE 334, and actually less. So that means that AT THE VERY MOST, only 334 / 947 = 35.25% of PCGS-slabbed ANA-Chicago slabs are "legit", and actually the percentage is significantly smaller, because of OGP coins and the slight undersale below 1,500 coins.

I don't know about you, but it makes me question PCGS's ethical standards. Have a PCGS ANA-Chicago gold Kennedy slab? It's a MORE THAN 2/3 chance it's BOGUS (likely more like 3/4 to 90% chance), and was bought elsewhere and flown in to Chicago. Sorry, those are the facts. Math doesn't lie. Want the "real deal"? Only NGC has it this time around! [Edit: ANACS does too, but there are only 30 in existence and not an impact on the bigger picture.]

PCGS likes to tout their high standards. "Oh, we deal with a highly ethical network of authorized dealers." Yeah? Blow it out you-know-where. It's not the submitters' problem, PCGS, it's YOURS. YOU whored out the ANA show slabs, no one else did. You are now alone at the bottom of the metaphorical barrel.

UPDATE: On another website, a member of the ANA's Board of Governors (I'll not name him, he hasn't authorized me to) called the PCGS ANA show Kennedy gold slabs "Fairy Tales". That about sums it up.

Break it open and send it in to a real compny

the truth is sometimes harsh. Thanks for sharing this.

I agree with user_ 9998. I cannot look at that slab! The color is hideous!

Makes you wonder what else PCGS has slabbed out there and their True grades.

Crack it out and sell it to me raw, rather than in a PCGS! Can you tell I'm ticked off?

What? How can you thay thuch a thing, Mithter Dar? Don't you real-ythe that PCGS ith the thummit of thpethial cointh and the epitome of ethicth? Yeah, me neither. My eyes have been opened. I'm dead serious, dealers. Don't EVER try to show me a coin in a PCGS holder. I just may throw it at you.

Dang. That's why you should always wait until after the big rush.