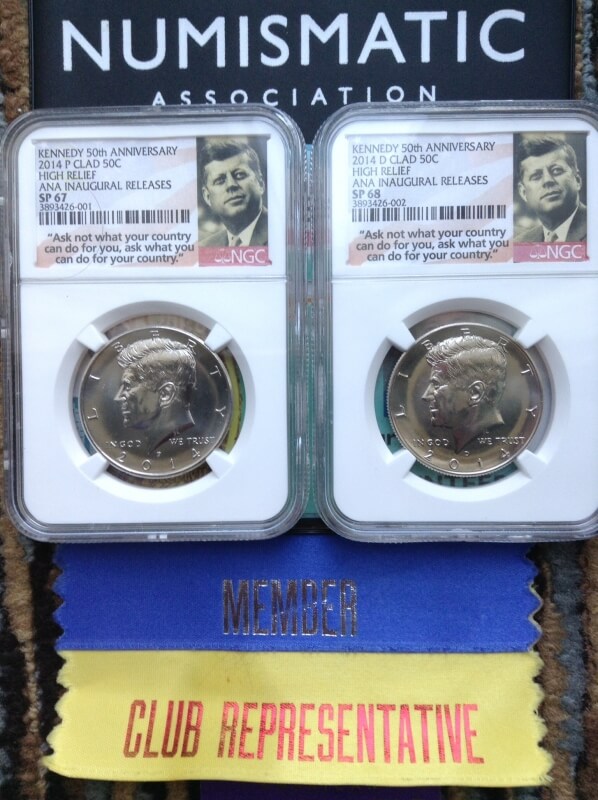 Okay, I admit it. I was part of the Kennedy Half Dollar madness.

No, I don't "do" gold at these prices. I believe gold is still unreasonably high right now. I truly believe someday before I die I'll be able to grab a 1964-2014 dual dated gold Kennedy for just over $500 or perhaps even less. I believe that as surely as I am here typing this. So why would I pay $1240 or $1277.50 now? I wouldn't, I didn't, and I won't. Many of my modern commems were bought in the secondary market at a discount to original issue price.

No, I was up to my eyeballs in the "other" Kennedy slab - the clad set. When the show floor opened at the cutting of the ribbon on Tuesday, I went immediately back to the US Mint booth and bought two sets - the maximum. $19.90 please. Kaching!

About 2 weeks before the show opened, I opened a paid account with NGC. I had always had the ANA member associate's account, but they weren't accepting show submissions from them, only paid accounts. I believe I was the very first person to arrive at NGC's table at Chicago with a clad set of High Relief Kennedys. The helpful lady there had to read her own instructions on the submission for the ANA Inaugural Release label. I carefully severed the plastic overlay holding the coin capsules from the printed card (not as easy as it sounds), and filled out my very first NGC submission. I had always been an ANACS man "back in the day". $100 for the two coins. The other set would be awaiting the Mint "Director"'s autograph on the original package. The lovely lady told me to come back Friday.

My Denver came back SP68 and my Philly got SP67. I had also brought with me two rolls of "garden variety" 2014 Kennedys, one D, and one P. Friday night after the banquet, I carefully compared every D and every P to each other and selected the best from each roll, and made them part of my "normally priced" larger Modern coins NGC submission for Saturday morning. I just checked the website and the grades are in. Keep in mind these are normal production coins pulled from a wrapped roll.

All of my other pieces came back as (very) pleasant grading surprises as well, including two Type 2 1981-S SBA's at PR69UC. I swear I saw marks on them that would prevent being "9's".

Not bad for Kennedy coins from the production line, eh? This will be parts 1-4 of my personal ten-coin 2014 Kennedy NGC slabbed set, with all types except the gold one, which can lie there and bleed for all I care.

I later gave away almost all of both remaining roll portions to service employees and children interested in coins at Rosemont, downtown Chicago, the train to Washington, DC, and in DC near Ford's Theater and at the Mint's sales counter nearby. "Random acts of numismatic kindness."

I like all the Kennedy sets but not the gold coin. I bought the silver. Thanks mike

Those are some cool coins

Another great article! Thanks.

I will be getting just 2 sets of each, also leaving out the 'gold'. One for the Book, and 1 in the OGP. I really like the way the presentation packages look. At the moment, I don't "DO" slabs. I can't justify paying for someone eles opinion on a new coin. Now if they are 'older' and hard to come by, then maybe. Depends on how much of the "I gotta have it" factor is involved. :)

For me, the ANA slab is just another kind of expensive show souvenir. I largely don't do much with slabs either. Heck, I now have Chicago Coin Club medals in silver and copper, as well as as full set of the CCC rectangular Standing Lincoln's. I do intend to complete this kind of special year in Kennedy's with slabs, though. I also slabbed a couple of 1996-W dimes. I only do it for unusual issues with a story.

I cant afford gold coins, that is why I buy silver.

Me also. The Kennedy gold coins are way too expansive right now.

I firmly believe that at these gold bullion price levels, NOBODY can "afford" gold coins. You are just smarter than most in realizing that.

The gold one is out of my price range anyway. But I do want the Silver 4-coin set coming soon.

I guess I'm going to be looking at three sets to keep - one to slab, on to keep intact in OGP, and one to mount in my Dansco album, if they make the 2014 pages as they should.