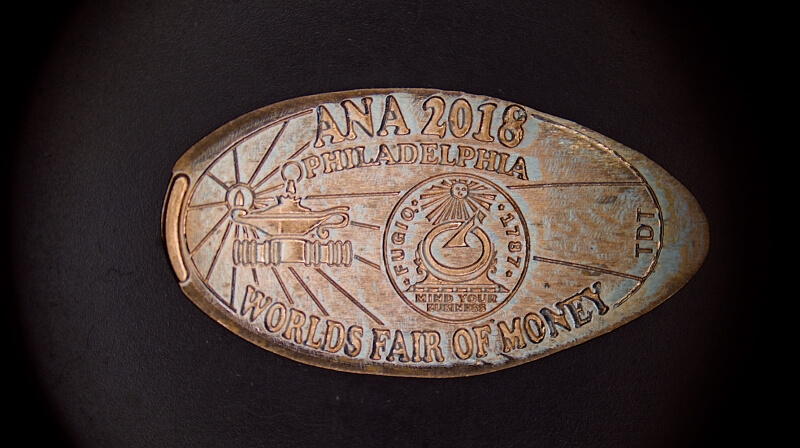 24 Aug 2018
I'm sorry, I have to say this - gripe all you want about the ignorant labor union rules at the Pennsylvania Convention Center, and you wouldn't be wrong. But I am quite sorry but Denver, Colorado; Anaheim, California; and even Rosemont, Illinois cannot hold a candle to Philly when it comes to dragging out a crowd for an ANA World's Fair of Money. Even school-aged kids were in abundance. Philly area school districts don't open until September 4th (they'll still be in class on June 10), some even later as they discover the mold that grew in their buildings this summer from record rainfalls. Last year, a random rifle shot up an aisle at Denver would have endangered no one!
There simply is no denying it - Pennsylvania is the one and only place to be in numismatics. I'll even help the ANA locate the new HQ here if they'd like. The Colorado Springs thing is so "last century" anyway.
Coin clubs still thrive here by the dozens. Live coin auctions are a nearly weekly event, and many of them don't even offer internet bidding! Show up at an obscenely early hour of the morning and save by buying real collectible coins, as a collector, often for 60% back of Greysheet. This is the Pennsylvania numismatic scene that I know, live, and love on a week in and week out basis. Slabs are a choice, not a requirement. It's "old school", it's real, and it's my home.
The quality of the exhibiting was up, but the scores were down, due to new judging standards being rolled out. Very few blue ribbon exhibits crossed the 90-point mark. Deal with it!
It was my pleasure to judge Class 1- U.S. Coins. I exhibited in Class 20 - U.S. Commemoratives (1st place) and Class 10 - Regional Numismatics (2nd). My big surprise was the Derek Pobjoy Award for the latter exhibit.
Are you "dabbling"? Are you "lurking"? You simply must dive in and do the "meatspace" thing in numismatics. eBay is a  cruel shadow of the real numismatic marketplace. Step up. Be in Pittsburgh next March 28-30. I will. But there's no way they're topping Philly.
The bourse dealers were great, and both Heritage and Stacks-Bowers showed the field they're still here, but we need to have a serious moment about one thing. The World Mint Passport program is on life-support. It is in deeeeeeeeep doo-doo. Six countries? Really? As I type this, my 1997 "WMP" is on my lap. 21 countries, 22 coins. The Vatican participated in 1997. Hungary. Israel. Thailand. Mexico. Bulgaria. ANDORRA for crying out loud! This is sad. Tell the Swiss we insist they come or every coin dealer will close down his Swiss bank account. That ought to interest them.
Where else you gonna go and be able to question most of the CCAC in person? Nowhere but Philly, baby.

I went to ANA in Philly yrs ago. I recall, on Sat you could hardly walk thru the aisles. Big, fun show.

The ANA Board of Governors can PRETEND that Philadelphia is NOT the best site for a WFoM all they like. People with eyes can see. And I actually AM a current card-carrying member of next year's host club, the Chicago Coin Club.

In both 2000 and 2012, the host club was the Red Rose Coin Club of Lancaster, PA. In 2012, I was the Volunteer Chair of the Host Committee. The Red Rose Coin Club is THE SINGLE MOST ACTIVE coin club in the entire nation when compared with the population its geography is meant to encompass. I now am in Harrisburg and am no longer with Red Rose. The AVERAGE MEETING ATTENDANCE at Lancaster, PA is LARGER than either the Chicago Coin Club OR the New York Numismatic Club, and Red Rose meets twice per month. An utterly amazing club! At Philly last week, the gold medal and silver medal winners in United States Coins exhibiting were BOTH Red Rose Coin Club members.

Yeah, I Wish I could have been there, sounds so fun. A small, 30 table coin show in Fostoria, Ohio brought up over a thousand people to it last year. Philly, Pittsburgh, Cleveland, Columbus, Colorado springs is so far away, and in the middle of nowhere. I would be able to go to it if it was closer.

Fostoria is where again? LOL!

Sounds great. I have to say, you sound like a proud member of the Philly scene!! Thanks.

Re: Philly generally? It can be a "tough love" story, no doubt. I'm hook, line, and sinker for the sports teams, since the mid-1960's. The city itself can be an acquired taste. Or more accurately I guess, a taste that one slowly loses over time.

I work for the Pennsylvania General Assembly, in Harrisburg.

I haven't been there but I'm sure there will be some who agree and some who will disagree. Collectors go to shows for different reasons. Even the weather. Some go for exhibits some go looking for certain coins. Some go for a good time. That's what counts. So it doesn't matter were you go it's the person who has a good time or not. I'm sure it was everything you said. But not everyone is happy. They didn't get that coin or see that author. Some were priced out it's up to you to make it your show. Thanks for the follow up sounds like you had a great time good for you. That's what counts everyone having fun. Take care and thanks again. Mike.

The publishers of CDN gave out copies of the CPG Coin & Currency Market Review publication to Philadelphia registrants. We completely ran out by Friday at noon, with a show not closing until Saturday at 4.

I wasn’t able to go to the show in Philadelphia, but sounds fun!