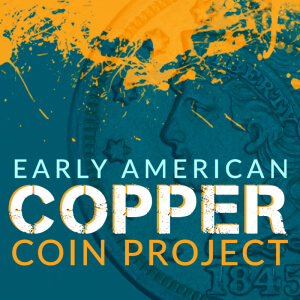 Early American copper coins - large cents and half cents (1793-1857) - were the coins of the people, the coins used for everyday transactions, the pocket change of early American citizens. Cents and half cents were also the first coins struck under the authority of the United States Government by the First United States Mint in Philadelphia, Pennsylvania. The stories about their history, designs and designers, minting processes, collectors, and pedigrees bring U.S. history alive!

Participation in the Early American Copper Coin Project allows ANA members age 17 and younger to earn awards such as early American large cents, half cents, reference books, or supplies by just being active in the coin-collecting hobby, writing articles or school reports, doing a presentation for school or Scouts, exhibiting, completing correspondence or Summer Seminar courses or doing other interesting (and fun!) projects. The Early American Copper Coin Project Forms outline the method for earning awards. All submissions must be unique to this program.

For more information about any of the items you earn, please contact the project sponsor, Douglas F. Bird, PO Box 608, Hermosa Beach, CA 90254. Questions about the project should be directed to education@money.org.

To learn more about U.S. Large Cents and U.S. Half Cents, the following books are recommended (these books can be borrowed from the ANA Library).

The Early American Coppers Club (EAC) is an ANA member specialty club for people who collect, study or have an interest in Large Cents, Half Cents and other Early American copper coins. They publish an excellent journal, PennyWise, 6 times a year and a weekly electronic newsletter, The Region 8. For more information, contact the secretary, Rod Burress at PO Box 15782 Cincinnati, OH 45215.

One of the first coins struck at the U.S. Mint was the Large Cent. This large, clunky copper coin was struck from 1793 to 1857, inclusive, with the exception of 1815, when a fire forced the closing of the Mint.
Three design types appeared in 1793, each an attempted improvement over the previous.
The first design, known as the 1793 "Chain" Cent, features a low-relief head of Liberty with fine, flowing locks of hair. The reverse shows a chain of fifteen links, connected in a never-ending loop. Initial reaction to the coins was quite negative: Liberty appeared to be in a fright and the chain was seen by many as representing bondage and slavery as opposed to strength and union.
As a result, Liberty's hair was strengthened and the chain was replaced with a wreath. Known as the 1793 "Wreath" Cent, this design fared little better than its predecessor and was soon replaced.
The "Liberty Cap" design turned out to be a little more enduring. Minted from 1794 to 1796, this design type is full of interesting varieties, many of them rare. In 1795, the weight of the Large Cent was reduced and the edge lettering was replaced with a plain edge. Some of the 1797 Large Cents have a curious "Gripped Edge."
In 1796, the "Draped Bust" design appeared. This type was minted until 1807. Rare dates in this type include the elusive 1799 and the popular 1804.
The "Classic Head" Large Cent ran from 1808 to 1814. Although none of the dates are rare, they are hard to find in nice condition.
The "Matron Head" design appeared in 1816 and lasted until 1839. Scarce dates include 1821 and 1823. Known as "Middle Dates", this series contains many interesting varieties that are of great interest to a large number of collectors. Certain rare varieties can be worth hundreds or thousands of dollars.
The final design type is the "Braided Hair" type of 1839 to 1857. The last year is both scarce as a date and popular as the last year of the denomination.
In 1857, the Large Cent was replaced by the new Small Cent, a much more manageable (but less impressive) coin.

By Ron Guth
The United States minted Half Cents intermittently between 1793 and 1857. While this unusual denomination might seem useless today, it was an important part of our monetary system back when working wages were $1 a day.
The Liberty Cap Half Cent came in two different versions: the Head Left (issued in 1793 only) and the Head Right (issued from 1794 to 1797). The 1793 Half Cent is a scarce date and was one of the very first coins issued by the U.S. Mint. The rarest date in the Liberty Cap series is the 1796.
No Half Cents were issued in 1799.
The Draped Bust design appeared from 1800 to 1808, but no Half Cents were struck in 1801. The rarest date of this design type is the 1802, all of which were struck on cut-down Large Cents.
The Capped Bust design appeared on Half Cents beginning in 1809 and ran through 1836. No Half Cents were issued between 1812 and 1824, mostly because demand for the denomination was low and the Mint had difficulty obtaining planchets. In 1825, Half Cent coinage resumed, with breaks in 1827 and 1829.
No Half Cents were issued between 1837 and 1839.
The final Half Cent design type, the Braided Hair, first appeared in 1840 and ran through 1857.
In 1857, the Half Cent denomination was discontinued forever.
The Half Cent series is full of interesting and rare die varieties. Highlights include:
For More Information Please Contact ANA Education Department education@money.org
We use cookies to provide users the best experience on our website. If you continue without changing your cookie settings, we'll assume that you agree to receive all cookies on money.org. You may disable cookies at any time using your internet browser configuration. By continuing to use this website, you agree to our privacy policy and terms of use. To learn more about how we use cookies and to review our privacy policy, click here.