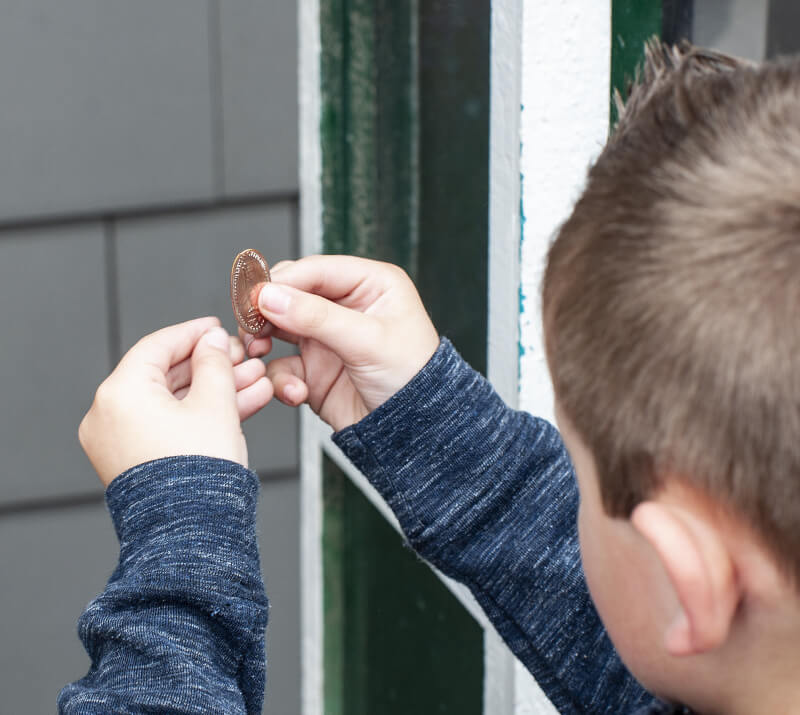 I have been building a U.S. type set of U.S. coins, but it is not your usual type set.

The 1893 World's Columbian Exposition in Chicago saw the introduction of a new novelty, devices to roll coins through a die which compressed and stretched the coin while leaving a new design commemorating the event. Elongated coins are common across the country with many businesses and destinations offering coin operated rollers to created your own souvenir, usually on a penny (yes, I know its a cent). I attached two images of one of my grandsons rolling a cent at the San Francisco zoo.
But, back to the type set. Visitors to the 1893 exposition rolled a wide variety coins foreign and domestic for souvenirs. I am slowly building a type set of U.S. coins rolled at the exposition. Indian head cents are the most common and the practice eventually evolved over time to where cents are the primary base coin for elongated souvenirs. Special sets using other denominations can be found, but they are not that common. In 1893, visitors rolled what they brung (so to speak).
I have included pictures of the four Liberty Seated pieces in my collection. It is the 1876 half dollar that was my delightful surprise. I try to save the pedigree of rare coins, medals, and tokens when I can. When my Ebay purchase of the rolled half dollar arrived, the packing invoice included a handwritten note from the seller. He wanted me to know that it came from his parents estate, Harry and JoAnne Peters of Fort Dodge, Iowa. Roger even included a wooden nickel from their coin shop in 1983/84. Harry was a past president of the Iowa Numismatic Association and his wife served as secretary for many years.
The 1876 elongated half dollar is rare and it now carries the pedigree of Harry and JoAnne Peters in my collection. Their son's handwritten note was a delightful surprise.

What a crazy coin to be rolled, the oddest coin I have that was rolled was a 40% Kennedy half, I suppose the next step is finding a rolled dollar. Good luck!

What a great idea you have. Talk about a unique set. Good luck. Thanks.

Now you have found yourself an absolutely fascinating niche to pursue. Thank You for sharing, I never knew these types of elongated coins even existed.

That was nice of them to give them to you. There a great set to collect. Many do collect them. Keep it going!!. I have a few that's all.

I am absolutely in love with the 1893-94 half dollar series. I have a couple fine specimens in my personal collection, and recently bought a ring made from the coin off ebay. Unlike most coin rings I buy, I might actually wear this one XD. Sadly, I it being shipped from china, and the mail process (due to covid) is extremely slow from china. Hopefully I'll get it before next year lol. Nice coins, you have my best regards! NumisMaster

I am not aware of any elongated Columbian halves or Isabella quarters. If they were made in 1893 then I would want to locate them for my collection. A new roller die was made and elongates made in the 1960s, but the die characteristics have been documented in Martin and Dow's Yesterday's Elongates. Why did I Begin this collection? I sold my U.S. coins (well most of them) and my type set in the late 1980s. Slabbing discouraged me and my interests turned to tokens and medals. I still appreciate coins, but money and grade numbers discourage enjoyment in my opinion. I recently examined a friend's collection of bust halves collected by die varieties. A great collection where a VF coin looks great and can be as desirable as an AU piece. But, I moved on to collecting areas where the hunt is fun and challenging. A $100 purchase or even a $10 purchase can yield an excessively rare numismatic purchase. I fell into the idea of building a type set while researching and collecting so-called dollars and related exonumia. I started with a common Indian Head Cent and a Liberty Nickel. Then it downed on me that a type set would be fun and challenging. The fifty-cent piece was the first I have seen in 10 years of looking. It was also the most expensive, but it is far from being the most expensive piece of exonumia in my collection. I am still looking for a Trade Dollar, a nickel Three Cent piece, a Flying Eagle cent, and a Barber half dollar. I have never seen a reference to a Morgan Dollar, but I suspect one or more is out there somewhere.

Another area of numismatics that I have yet to explore in depth, other than the places I've been where you can make an elongated cent. I was especially interested in the Colombian exhibition example. I have the Commemorative quarter and half dollar, so I would like to find one. How rare are they?

Fun blog! These are pretty cool ; ) I have a few from along time ago. Good luck with your collection!

Yea that's neat. I still have a old small cigar box with all the elongated coins from when I was a kid. Nice memories brought back with this blog. Later!

God bless Harry and Joanne Peters. What a great set to make. Awesome elongated coin. 1893 Isabella quarter elongated? What made you think of doing a set? I think its a great idea. Always loved elongated coins. Have a few from my childhood. Thanks for sharing. Love this type of story.

What made me think of doing an elongated type set? I started collecting Lincoln cents 60 years ago before moving on to a type set, over dates, and world coins. My interests eventually led to tokens and medals. The other collections were sold when I started a family and could no longer afford to pursue them at the level I desired. As my token and medal interests became more refined, I acquired a Columbian Exposition official medal struck on a large cent. Research the history of that medal made me recall my earlier foray into type set collecting. I noted that a large number of different coins were rolled at the exposition (it was a new and novel idea in 1893) and that began my new type coin collection theme.