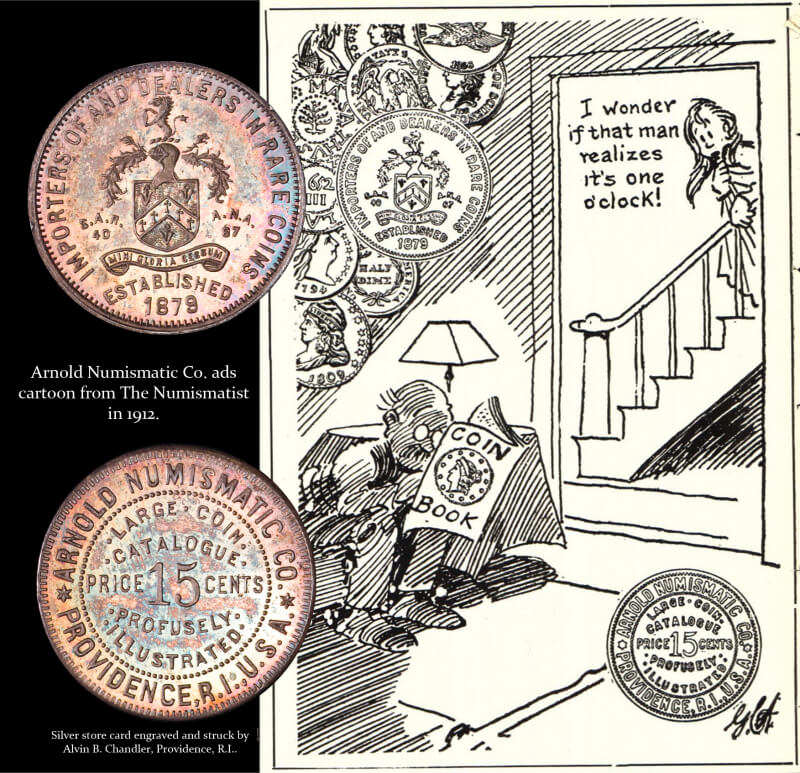 05 Jan 2019
One attraction of exonumia (tokens, medals, things that are like money but different) is the wide variety of collecting themes available. I have many and varied interests and collecting themes that I wander among looking for items that catch my interest. When one dealer asked what I was interested in, I replied: "Anything I can tell a story about." Coin dealer store cards are one of my many interests.
I recently acquired five store cards from the early 1900s. The might appear to be but are actually not a complete set. But they do represent the range of material used to strike the two store cards for the Arnold Numismatic Co.  I have paired two of the tokens with a 1905 article by A. Frey announcing the store card and a later 1912 ad from The Numismatist using the newly updated store card in an Arnold Numismatic Co. ad for their coin catalogue that they issued from time to time.
The lot contained brass (paired with the announcement) and copper examples of the earlier store card and silver (paired with the ad), aluminum, and red fibre examples of the later store card. The same obverse die was used for both issues. A new reverse die was used for the 15 cent later token.
George Arnold started his business in 1879 in Providence, Rhode Island and was otherwise busy in several other business ventures. As Frey notes in his 1905 article, the obverse of the token depicts the coat of arms of the Arnold Family. The small notions on either side document his membership in the Sons of the American Revolution (on the left) and his membership in the American Numismatic Association.
Now I am looking for an example of his publication to add to my collection.

Those are beautiful. The actual adds really make the collection pop.. Good luck.

I recall finding quite a few modern dealer tokens when I'd comb the convention floor at big shows.

I am I large collectors of tokens. Civil war tokens Hard times tokens and Conder tokens. All these were used as money in bad times. The Conders saved England from going bankrupt after three wars. The Civil war Tokens helped soldiers and people get through that terrible war with the Hard times tokens. I'm glad you found these I think there great enjoy them I don't know how many were made. But I'm sure there is a book out there on them. See if you can find one. Contact the library. Good hunting and thanks for the pictures. Mike.

Really cool stuff and interesting blog! Good luck on your quest for the publication! ; )

Fascinating, I am constantly surprised and delighted by the breadth of different items that make up our hobby. I recall getting several tokens from the east coast that had the Morgan Dollar liberty on the front, the medals were about current dollar size and look to be made out of nickel or some similar metal. They were included by the seller when I purchased on a couple of occasions through Ebay. Now I wish I had kept them.

Very interesting blog. Exonomia is what makes a collection interesting. Good luck with finding a publication.