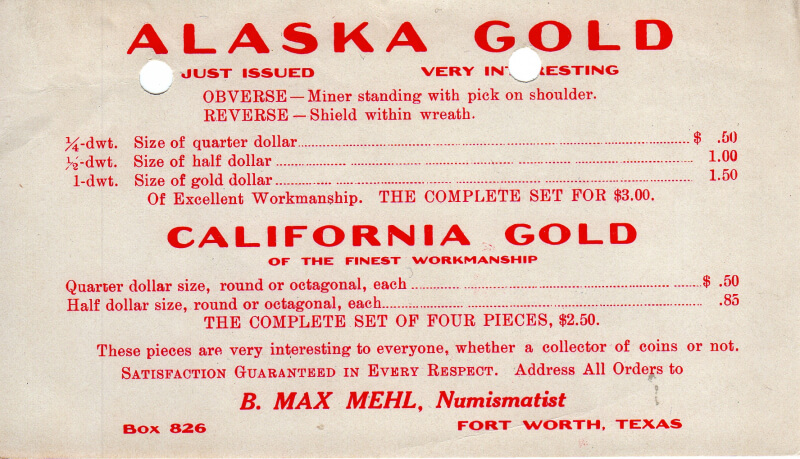 A new addition to my ephemera collection has an interesting back story. Although it is undated, I believe the B. Max Mehl advertising flier dates to the end of 1909, likely around the end of the 1909 Alaska-Yukon-Pacific Exposition. “Alaska Gold,” “Just Issued” refers to Jules Charbneau’s AYPE three gold token set released in early 1909. You can read more about the tokens in the January 2013 issue of The Numismatist in an article by Jeff Shevlin and myself, “Jules Charbneau’s 1909 AYPE Gold Dollars.”

What makes the circular interesting is the general reaction to the various gold pieces Mehl is offering for sale. Farran Zerbe, a friend of Charbneau’s and the likely inspiration behind Charbneau’s gold set, criticized Charbneau for referring to them as coins in an article in The Numismatist in 1909. Henry Drowne critiques the Nathan Joseph tokens in the April 1910 issue of the American Journal of Numismatics as being of no interest to numismatists as they are spurious and ill-advised attempts to induce others to fool the public. He asked, “Can reputable dealers wonder that they are discredited when such palpable tricks as this can be perpetrated, without interference?”

One wonders if Drowne was thinking of Mehl as being a witting or unwitting party to deceiving the collecting and non-collecting public. Drowne expected that honorable dealers would caution their clients against purchasing such material. Zerbe accepted the Charbneau tokens as legitimate souvenirs as long as they were not sold as coins, but criticized these later gold charms.

Charbneau’s gold pieces are accepted today as legitimate collectibles from the AYPE. Nathan Joseph’s tokens have a more limited collector base. B. Max Mehl is respected today as a dealer who did much to expand the popularity of our hobby.  And the B. Max Mehl sales sheet is an interesting artifact of the state of numismatics in 1910.

A few related numismatic items are pictured in addition to the sales circular.

Well I looked a few places in the D.W.T. Gold. In MS 64 there selling for 900.00 to over a thousand. Very impressive for such a small weight. But take the exposition the good from 1909 in great condition you get a great price. I myself never publish my cost for anything. But If they could talk!

Interesting blog! Cool items as well. Thanks for the info!

If I picture something in my blog, it is in my personal collection unless I note otherwise.

Nice blog. My wife got taken by an old dealer we did business with before. It was at a show in Nevada on a supposed fractional gold Ca. piece. Fake he refused to honor.. broke her little heart. it was to be a gift. Thanks.

Informative blog! A side of numismatics you don't hear abt that much.

A great collection if you own these pieces. I always look at this epieces at the end of the Red book and wonder about those Octagonal shaped coins. The old pricing list you inserted gave me a big laugh. To get all of those beautiful coins for 2.50$.

I just finished reading a book, by David Bowers, about the coin collecting hobby prior to 1860 in the USA. Lots of interesting price sheets and auctions described. I think the history of our hobby, through the efforts of August Sage, Max Mehl, Aubrey Beebee, or Mr. Bowers himself is fascinating and well worth exploring if you want to consider yourself a well-rounded numismatist. Coin collecting should be better described as a collecting history, one piece of coinage at a time.

It is great to collect numismatic related items to your collection. Makes that more interesting.

Ok you own these coins? If you do great good for you. Anyone would be happy with those. Say you own them. A great collection. I am impressed with the history of these. I'm sure someone can date them. I love the price on the sales sheet. Great blog I don't have to tell you about the history I just love it thanks. Mike.