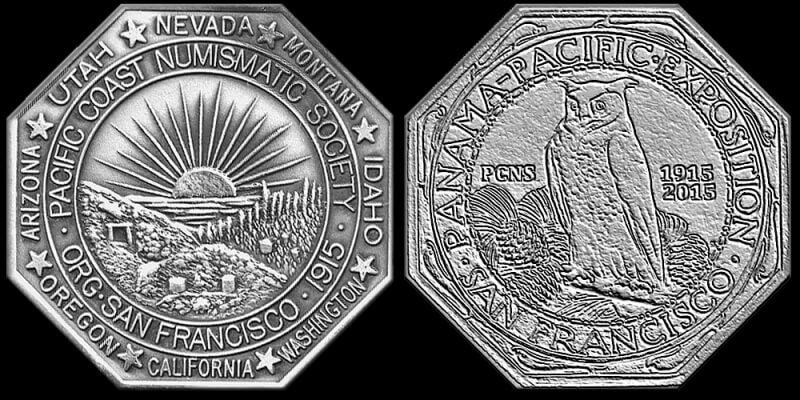 The Pacific Coast Numismatic Society is celebrating its 100th Anniversary in 2015. Founded in 1915 by a small group of San Francisco collectors and Farran Zerbe, the society hosted the ANA convention that summer in conjunction with the Panama Pacific International Exposition.The Society is working with Daniel Carr and the Moonlight Mint to create a silver medal to celebrate the anniversary.Mintage will be limited to the number of orders received by June 15. Silver medals are $75 or a two medal set of silver and copper medals can be ordered for $100. Copper medals will not be sold separately. Postage is $6.00 for US addresses.Orders with accompanying payment should be sent to:Pacific Coast Numismatic SocietyPO Box 475656San Francisco, CA 94147-5656The club logo was designed by Zerbe and adopted in August 1919. The first rendition of the logo was excuted by Victor D. Brenner and delivered to the Society in January 1920. His plaster rendition is lost to history, but the first medallic use of the logo was on the 1940 25th anniversary medal. Only 60 examples were struck in silver and one is known in aluminum. These medals are much sought after today.Daniel Carr selected the design of the 1915 $50 US commemorative gold coin to commemorate the 100th anniversary of the Society and the PPIE.The images accompanying this post include a rendition of the medal to be struck later this summer, the 1940 medal, and the announcement of the adoption of the Society Seal as it appeared in The Numismatist.