Coin Rolls All Types - Lots of info and learning as well! 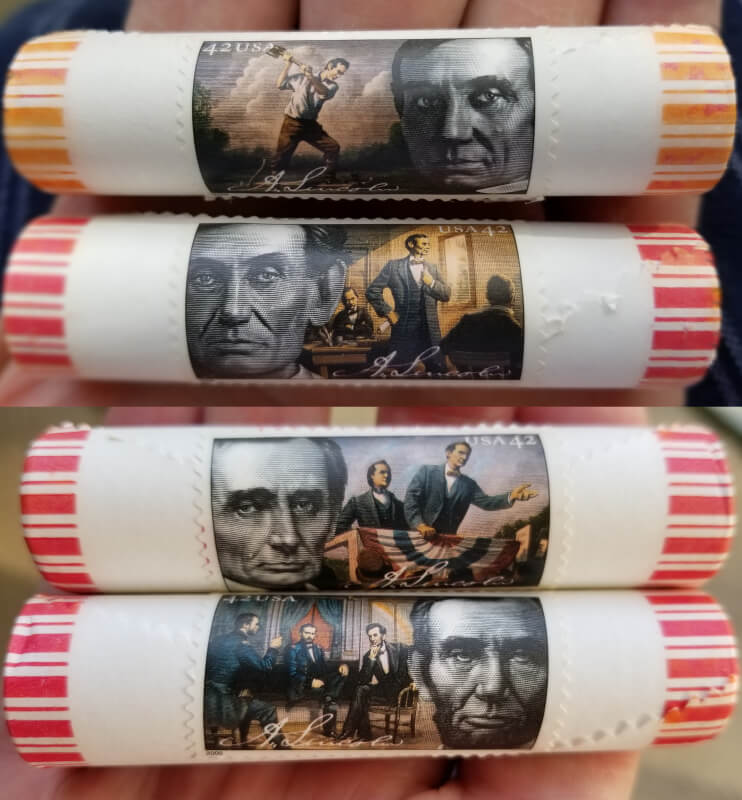 Coin Roll Hunting (CRH) is what I've been doing perhaps the longest during this life-long hobby.
Some types of rolls...

Original Bank Wrapped Rolls (OBW) - They come from banks and transport/money services in both the past and present. Can contain newer minted coins from a single year or a circulated mix of coins. If it is an authentic original bank roll BOTH ends will have a VERY tight machine crimping that looks basically identical at both ends. Although, machinery to create original crimps can be had but...actually re-wrapping an opened roll even with a proper machine will not look original (full disclosure this can be difficult to recognize even after many years of opening rolls). Also, older style unused bank roll wrappers can be acquired, but more on all that later :-)

There are also versions of OBW rolls that are in a shrink wrap thick plastic, as well as versions in plastic tubes but usually plastic tubes have been used by the mint only to package original mint rolls...I don't know of banks that ever received their coins in hard plastic tubes. Sometimes serious coin roll hunters and coin dealers will transfer rolls or the contents to plastic tubes if there has been damage to the original roll or honest dealers will often check rolls to see what the contents are without cherry picking them at all.

U.S. Mint Rolls - Usually purchased or coming directly from one of the U.S. mints in a sealed mint wrapper (which at this point I swear that the mint deliberately uses paper that is designed to create some toning!). Sometimes you can get these from bank branches but that doesn't happen too much. The U.S. Mint have quite a variety of rolls, sometimes multiple designs just for the release of one coin. Sometimes the wrappers have promotional graphics for the mint and sometimes they are very plain.

"Unsearched" Rolls - Really it's a generic term referring often to potential scam coin rolls being sold online. There is a simple tool which can be used to re-close and create an ok looking crimp on a previously opened or searched roll. Nefarious sellers will sometimes "seed" the end of a roll with a suspiciously nice coin in order to get bidders excited about what's in the roll. I have a whole lot to say about these rolls...often it's obvious to me that a roll has been opened and a seller is simply not being honest. Sometimes these "fake" rolls were made many years ago and so now have varieties that were unknown, or maybe the person who searched the roll actually didn't quite know what to look for. Occasionally I will just bid on what I think that nice "ender" coin is worth hoping the the side I can't see isn't completely trashed lol! This has paid off big time for me before, but it's a straight up gamble when you do that.

PRO TIP: Please don't spend more than you can afford! For me it is a fun hobby that sometimes pays off! Sometimes I choose a $10 roll of coins online from a seller who obviously doesn't sell a ton of coins hoping they don't quite know what they have...rather than say, a $10 cup of coffee lol! Ok that's an exaggeration, but maybe not if you live in Los Angeles :-) I brew my own in the morning, it's much more satisfying but I digress...

Unique rolls - These don't show up too much and they can be really tough things to validate, that is until you open them and search them! :-) My best example of these are a few rolls I got from a seller who inherited a box with about 50 strange rolls of pennies from a grandparent or something. The seller discovered that they were penny rolls his relative hoarded in 1939 and were hand made with newspapers from the day. I was able to get a handful of these rolls and besides the obvious old newspapers (which would actually be a genius move to sell fake rolls! Though I've never seen someone attempt that one!) the wonderful "diagnostic" for me is the absolutely ancient tape on these rolls, I had to ask an even older folk if that looked like tape maybe from the 30's!

HISTORY TIDBIT - An interesting side note is that coin rolls had just started to be used by the federal government rolling nickels sometime during the transition from buffalo to Jefferson nickels.
Coin rolls started to be used more widely for various types of coins in the early 1940's by the U.S. government but mostly there were still huge canvas bags and kegs of various sorts being used to deliver the coins around the country.
...And so that seller you saw advertising an original sealed roll of Indian Head pennies straight from the 1800's...Nope, not from a machine, didn't happen. Unless someone designed one in their basement and never patented it. :-)

FREE TIPS FOR FINDING AND BUYING COIN ROLLS!
FINDING...
- Ask everyone! Didn't you do this when you were a kid lol!? Find out who is interested in what.
- Ask EVERYONE lol! Your Doctor, Grandma, your friend who goes to estate sales, your neighbor who loves garage sales. Simple, the more you look for a thing, the more you will see it, I promise.
- I have and do buy rolls on ebay (I've been on ebay over 25 years!), but I've been buying coin rolls since waaay before our interwebs! We're talking like far before even AOL...before Fantasy Island!

I have a couple of connections now that I regularly get a few rolls from and you will end up finding some too!
Amazon will rarely have rolls I'm interested in.
Etsy is not a good place for any coin buying!
Craigslist can sometimes lead you to a deal but, experience and safety in a public space key but I'm not encouraging any type of unnecessary adventures until we're all in a far safer place from the pandemic.
It is a part of our coin collecting world at the moment, please don't ignore it and stay safe!!!

BUYING...
- Read EVERY word of the listing.
- Remember that some words mean NOTHING... "unsearched", unsearched by whom?!
- Don't be shy, contact the seller and ask EXACTLY what you want to know about the roll.
- Sometimes positive seller feedback contains negative information about the products!
- There are a ton of great rolls available with honest sellers!
- When it's safe again visit your LOCAL COIN SHOP (LCS) and ask them if they have unsearched rolls! Your local coin shop WILL be honest with you!
They may have opinions about rolls that are different than mine, but that's totally ok too :-)

Please note, any and every roll is about "Cherry Picking"! Whether it's high grade specimens or book fillers or errors or interesting varieties or beautiful toned coins...
I just set this "Collection" up so I will be back to add more photos of types of rolls...

Very interesting! As a beginner roll searcher, this was very helpful!

You're most welcome! Feel free to contact me with questions if you have any...enjoy the hunt(s)!

Awesome roll collection. I certainly don't have anything like that.

Thank you... I am so grateful to be able to search some special things! At some point you will have some things like these!!! :-)

Cool! What are some of the things you have found in OBW rolls? Any interesting varieties or very high grades?

Mostly in the OBW rolls I've come out with some nice very high grade specimens. I've had a pile going for a couple years now of things that I'm going to send out for grading...I'm sure when those come back I'll do a couple blog entries on them as well as videos for my YT channel! Maybe one of my favorites was from an older vintage roll...a roll most would assume was fake since it had a nice Flying Eagle on one end. I won it in an auction expecting the reverse of the Flying Eagle to be trashed...but it's unbelievable, I'd say it's right on the border of AU58 and MS60! So once that comes back graded I'll find out...but certainly worth FAR more than I paid for that roll! :-)

Amazing collection! I am so happy with the info! Extremely thorough. I have been burned with the "Unsearched" rolls on eBay. I have since figured out how to distinguish the crispness you mentioned. Thanks! I learned a lot.

I appreciate that so very much! Glad I could add to your wisdom a bit. I will keep editing and adding details as I think of them thank you!!!

Great collection! Thanks for sharing ; )

This was very helpful and informative. Thanks for telling us. I learned something I can use as I develop stock to begin to sell at coin shows. That's what I'm going to to when I retire!

Rolls still intact are good business too, especially if you're thinking long-term :-) Excellent!

Nice collection! Thanks for the tips!

You are welcome! I have many more types to add from my current collection :-)