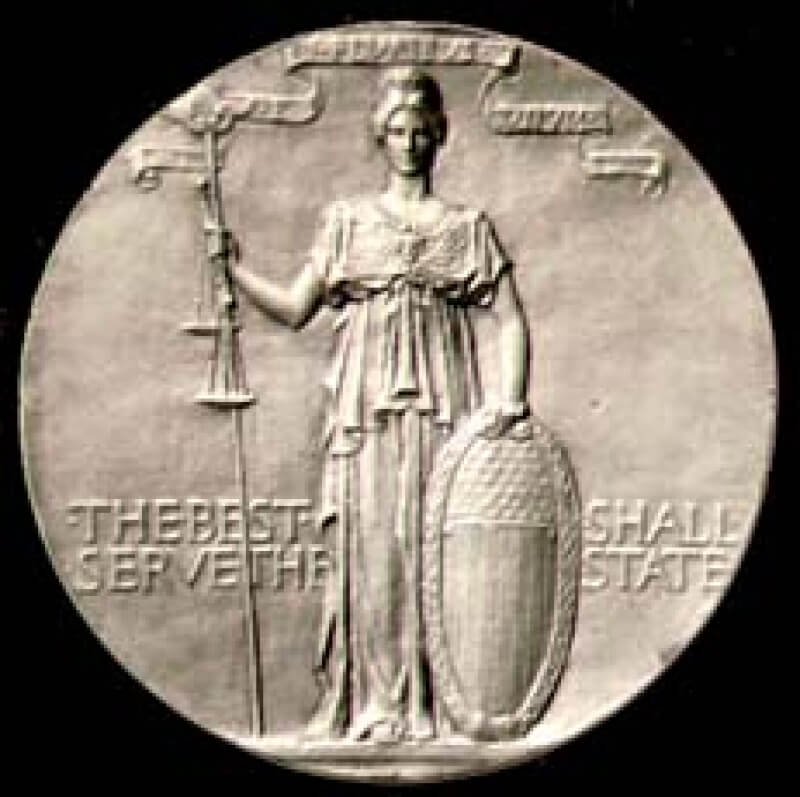 As a complementing post to "Well Worn Copper," I did extensive research on the Community Service Dollar some years ago and I'm posting the images of the St. Gaudens medal that "Well Worn Copper" references.  As you can see the medal is very similar to the coin. Below is a summary of the medal and the coin.

The design of the 1996 Commemorative Community Service Dollar is based upon a 1905-06 presentation medal designed by Augustus Saint Gaudens. Saint-Gaudens' niece, Marion Clark Nichols, an officer of the Women's auxiliary of the Massachusetts Civil Service Reform Association, commissioned the medal for the association. The obverse of the medal portrays an illustration of Justice as a standing female figure holding the standard and a scale in her right hand and the shield of the state in the other. Additionally, on the obverse is the caption, "The Best Shall Serve the State". The reverse of the medal depicts a laurel wreath with the inscription, "The Women's Auxiliary of the Massachusetts Civil Service Reform Association" in its center. The scale on the obverse of the medal represents justice, whiles the shield represents the state. The laurel wreath, dating back to ancient Greece, signifies victory and when used today, can denote eternity. The 1996 Commemorative Community Service Dollar illustrates Lady Liberty holding a book and lantern in her right hand rather than a scale. The reverse with the caption, "Service for America" is in the center of a laurel wreath on the dollar. Whereas, as in the year 1906 Justice was the aim of Community Service, the year 1996 includes the light of education.

Thanks for the lesson and the view.

Great pics. Aside from anything struck in gold, this is about as affordable as many collectors will ever get buying something from St. Gaudens.

I agree with Kepi, the medal is nicer than the coin. It also gives you a better idea of what is supposed to represent.

Really interesting blog! I do like the Medal more than the coin. Thanks for sharing this information.

That is very interesting. Talk about her having friends, an uncle, in high places. Thanks. I wish we had the best serving the state, CA, now..

Great blog interesting I always said a good woman stands next to every man. Thanks.

I like the medal more than the coin. Thanks for this. Hadn't known this.

Thanks for the additional information! Enjoyed the blog.