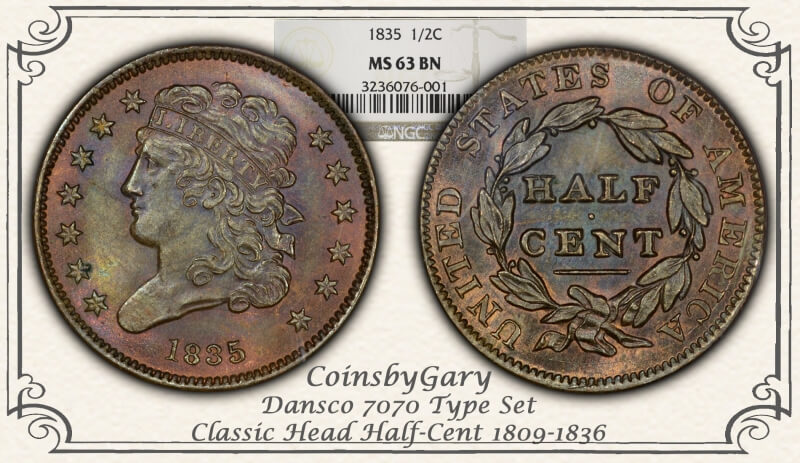 In my last post, Buying and Selling Part 1, I described how I sold circulated gold coins to acquire mint-state gold coins. In this post I will talk more about the proceeds from the other sales to finance two upgrades and a new purchase.

First the upgrades, and I’m not talking one or two grade points higher, but coins that are priced approximately six times higher than the coins they are replacing. The first coin is a PR-66 Three Cent Nickel replacing a common date MS-62. The other coin of which I previously wrote, “Was too good to pass up” is an MS-63 Half-Cent replacing a common date AU-50.

With most upgrades I prefer to subsidize the new purchase with the existing coin. However, because of the buying/selling ratio associated with the aforementioned coins, they might as well be stand-alone new purchases. Thus, these new purchases made it vital that I should sell coins that I was not replacing, such as the Silver American Eagles I referenced in my last post.

I bought the PR-66 Three Cent Nickel coin from Gary Adkins Associates. Although I didn’t originally intend to buy this coin, I got an e-mail offering a 5% Father’s Day discount through Gary’s website on his entire inventory. Well, I couldn’t very well pass up an offer like that, so I decided to upgrade my existing MS-62 Three Cent Nickel coin. Since Three Cent Nickel coins aren’t very popular with collectors, I was able to buy a high grade classic proof coin for a price that I could reasonably afford. As an aside many dealers sell the same coins offered on their websites as they do through their E-Bay stores. Since the E-Bay fees don’t come into play on their websites they will often sell the coins for less on their website than they do through E-Bay.

As I previous posted, the MS-63 Half Cent was an opportunity that I just couldn’t pass up because of its brilliant toning and exceptionally strong strike. Furthermore, the E-Bay listing employed high quality listing photos leaving no doubt as to the coin I was buying. On most E-Bay listings with a best offer option, I almost always submit an offer. However, since this was a PQ coin and I didn’t want to give anyone else an opportunity to snap it up, I gave him his Buy it Now price. Talk about an upgrade, this coin is replacing an AU-50 with poor eye-appeal! It very literally was a no-brainer.

Considering the amount of money I wanted to spend on this type, I finally settled on purchasing a Classic Head large cent in either VF or XF condition. That decision further narrowed the number of coins available. Other issues impacting my choice included the quality of strike and eye appeal. In the end there were three coins I was considering, an 1810 VF-20 in an upcoming Heritage auction, an 1810 XF-40 through Great Collections, and a 1814 VF-30 on E-bay. All three coins had pluses and minuses associated with them and I had to decide which plus was the most important.

The first coin eliminated from contention was the 1810 VF-20 Classic Head Large Cent currently listed in Heritages upcoming summer FUN auction. The-pre auction bidding rose to a point where the coin approached the asking price of the 1814 VF-30. Pure economics eliminated this coin as I thought why buy a VF-20 coin when I could have a VF-30 for a similar price.

This narrowed my choice down to two coins, the 1810 XF-40 and the 1814 VF-30. The 1810 featured visible star lines on 10 of the 13 stars, clean fields with lots of luster, and very little wear on the reverse. With all that going for it, this coin still lacked one very important thing in that there was noticeable weakness in the four locks of hair between Liberty’s eye-brow and ear. On the other hand, the 1814 has good facial details and displays all four of Liberty’s locks while there was only one lock clearly visible on the 1810. Additionally, the 1814 has reverse wear consistent with its grade.

When deciding on which coin to buy I determined to buy the coin with the best bust features. Thus, would I pay $700 more for an XF-40 coin with weaker hairline features or a VF-30 coin with a little more reverse wear and better hairline features? In the end I decided that I needed to be happy with the coin and I made a best offer on the E-Bay listed 1814 VF-30. Now that I have that coin in hand, I am all the more convinced I made the right decision. Interestingly, the 1810 did not sell the first time around on Great Collections, perhaps suggesting that there were others with the same impression of the coin I had. The coin did finally sell though in a subsequent auction with a single bid.

In closing, I hope you all get the coins that you really want!

Great story! Keep up the persistence and hard work!

I love these blogs! Keep it up!!! Wonderful coins and wonderful blog!

Good collecting stragegy. Thanks for the pictures.