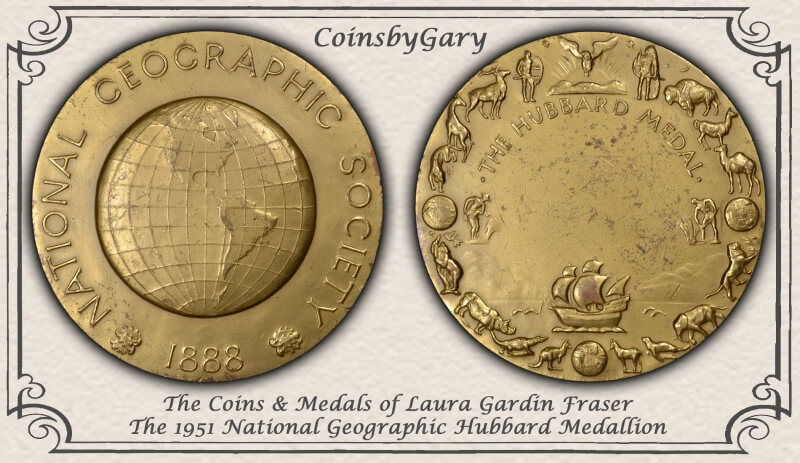 The Hubbard Medallion redesigned by Laura Gardin Fraser in 1951 is struck in 14 karat gold, weighs 474 grams and is 93 mm in diameter. [3] The medallion in my collection is struck in gilded bronze that gives it a similar look to that of the 14 karat gold medallion. The edge inscription on my medallion is "MEDALLIC ART CO.N.Y. BRONZE." Thus, it seems probable that my medallion was a trial strike, perhaps struck with the same dies used to strike the gold medallion.

According to Medallic Art Company historian and senior consultant D. Wayne Johnson on his databank, the redesigned Hubbard Medallion has a MACO die number of 1951-016. [4] This ingenious method of cataloging dies devised by D. Wayne Johnson himself signifies that the dies for the new Hubbard Medallion were the 16th job in 1951. (Incidentally, Medallic Art Company retains all the dies they ever used in an environmentally controlled die library). [5] That said the first recipient of the redesigned Hubbard Medallion and the 15th overall was Arctic explorer Donald B. MacMillan on January 9, 1953. Ironically, Commander MacMillan was an aide to the first Hubbard Medallion awardee, Robert E. Peary.

Of particular interest to me is a non-cited quote by Laura Gardin Fraser concerning her design of the Hubbard Medallion: "My idea in using animals was to have them represent, along with the races of man, the continents of the globe. I chose such creatures as would readily be recognized as having inhabited their respective regions from man's earliest remembrance."

Finally, when I examine a piece of medallic art I sometimes wonder what the sculptor of that medal or coin intended to communicate through it. I also believe that the said sculptor derives a certain degree of satisfaction when he or she sees the desired effect of their medallic art on its recipients. In some cases, the legacy and effect of a sculptor's work continues after their death. Such is the case with Laura Gardin Fraser (1889-1966) and the Hubbard Medallion.

The following is the story of a very proud woman whose great-great-great uncle received the Hubbard Medallion posthumously.

Matthew A. Henson was an Arctic explorer and right hand man of Robert E. Peary. Unfortunately for him, very few African Americans were recognized for their contributions in discovery and exploration in the early 1900s. In fact, evidence seems to suggest that Matthew Henson was the first human to stand on the geographic North Pole, not Peary. Then on November 28, 2000 some ninety-four years after Robert E. Peary was awarded the Hubbard Medallion, Matthew A. Henson finally received his long overdue recognition when he was posthumously awarded the Hubbard Medallion. [7]

Leila Savoy Andrade had been a security guard at the headquarters of The National Geographic Society for three years. Few people where she worked knew that she was the great-great-great niece of Arctic explorer Matthew A. Henson. When she showed up at the award ceremony in civilian cloths the president of the Society, John Fahey asked her, "What are you doing here?" She replied, "That's my uncle." Leila was one of nine family members to attend the ceremony and she was quoted as saying this about her uncle, "Everyone in the family always said great things about him when I was growing up." Somehow I believe that if Laura Gardin Fraser were alive today, she would be thrilled about this story and the role she played in it. [8]

Very good of you to share this story and photos. Thanks.

that is a very well designed medal that possess much beauty. thanks for the blog

I enjoy your blogs and photos on medals and numismatics.

Thanks for all the info! What a beautiful Medal!

Great medal with a good story behind it. Laura Gardin Fraser accomplished so much. Collectors who focus on modern coins in super grades miss out on historical items like this.

Great, fact filled blog. Fantastic photos and Footnoted too! As always thanks!!

As always thank you. I know the company keeps all there dies I just asked a price on a medal for 1950. Anyway I like your blog Alot of information I will have to go back to process it. I did get far enough to know that this will be as good as the rest of them. Don't want to miss anything. Thanks Mike.