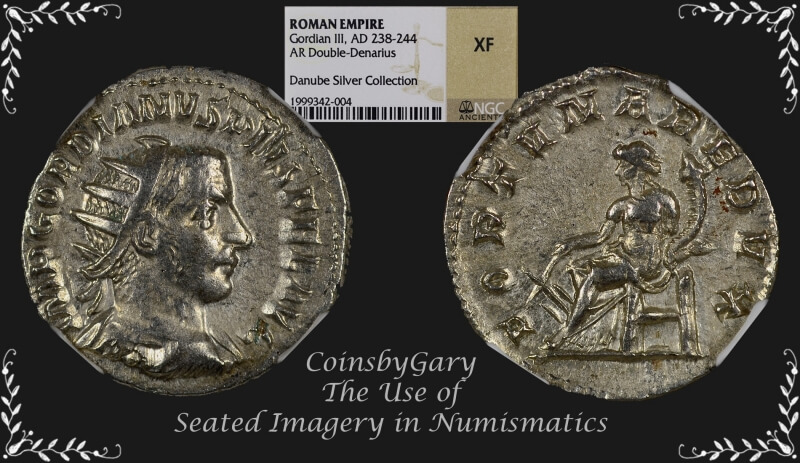 In 1879, the Austro-Hungarian Empire issued a 2 gulden commemorative coin to celebrate the 25th wedding anniversary of Franz Joseph I of Austria to Elizabeth of Bavaria. Equivalent to 2 Austrian Florins or 2 Hungarian Forints, the coin is 36mm in diameter and weighs 24.69 grams. It has a silver fineness of .900 and an ASW of .7144 oz. Minted in Vienna, Austria, this coin has a mintage of 275,000.

The central device on the obverse of this coin are the conjoined heads of Franz Joseph I wearing a laureate crown signifying honor and Elizabeth wearing a diadem signifying royal power or dignity. The obverse legend translated into English is "Franz-Jozef by the grace of God emperor of Austria and Apostolic king of Hungary, Elisabeth empress and queen." Inscribed on this coins edge is its denomination at 2 Gulden/2 Forint.

The central device on the reverse of this coin is Fortuna, the Roman goddess of chance or lot. Fortuna appears seated on an ottoman representing the oracular seat from where she steers the destinies of men as signified by the rudder in her right hand. Cradled in Fortuna's left arm is a cornucopia representing abundance. Fortuna, as portrayed on this coin is regarded as the bearer of good fortune, fertility and abundance. The reverse legend translated from Latin into English is "Fifth period of five years of the marriage ceremony 24th of April 1879."

Unfortunately, for Franz Joseph and Elisabeth history records quite a different destiny for this couple than what the coin suggests. One could even make the argument that due to their vastly differing personalities, they should not have married in the first place. Nevertheless, they were married anyway on April 24, 1854.

Now Franz Joseph had a lackluster personality and was devoted to the formality and tradition of the Hapsburg royal court. Conversely, Elizabeth was more of a free spirit, and abhorred the obligations that came along with being an empress. Consequently, even though Franz Joseph loved his wife dearly, Elizabeth did not respond with the same affection.

Elizabeth nicknamed "Sisi" by her family and friends felt emotionally constricted by the formality of the Hapsburg court. Consequently, I believe that the stressful expectations placed on her led to her obsession with beauty and various other health issues including anorexia.

In Elizabeth's defense, Franz Joseph's mother princess Sophie was very domineering towards her son and against their marriage. Additionally, Sophie had not allowed Elizabeth to raise her own children and separated them from her at birth. Though hated by her subjects in Austria, Elizabeth was loved by the people of Hungary. Consequently, I believe that Elizabeth's love for Hungary and her influence on her husband were contributing factors in the Austro-Hungarian compromise of 1869. This agreement gave Hungary a certain degree of autonomy and made Elizabeth and her husband the king and queen of Hungary.

Franz Joseph over the tenure of his reign presided over the gradual eroding of the Austrian Empire by other peoples from within the empire seeking their own autonomy and independence. Furthermore, Franz Joseph's mother, princess Sophie, exercised undue influence over Franz Joseph until her death in 1872. The effect of that influence placed a wedge in the relationship between Franz Joseph and Elizabeth. Later, somewhat estranged from each other, circumstantial evidence led to persisting rumors that they were both involved in extra-marital affairs.

In 1853 Franz Joseph survived an assassination attempt on his life. However, Elizabeth was not quite as fortunate as an Italian anarchist assassinated her in Geneva, Switzerland in 1898. In 1914, Archduke Franz Ferdinand was assassinated in Sarajevo and shortly thereafter Austria-Hungary declared war on Serbia thus igniting a chain of events that erupted into World War 1.

In summary, I wish to make two closing points. First is that I find it fascinating the degree to which this dysfunctional family directly affected the history of the world, including the number of people who have died in World War 1. My next point relates to Fortuna and one of two possibilities, she either is capricious in the way she directs destinies OR she is no god at all. I choose to believe the latter.

Exceedingly nice history lesson - nice being a relative use in this case for this topic. Thanks for sharing. The power and destiny of so few that can involve so many others is hard to believe - except it happened.

Very well written Gary. Thanks for sharing this history with us.

A couple of beautiful coins. Thanks for all the history in your blog. A lot of work. Thank you!

Thanks! Great blog! Lots of history going on here.

Thanks for the great story

Very well done. I enjoyed it very much. Very interesting I enjoyed studying the world wars why they started the different battles it great history. Thank you for taking the time. Mike.

Great blog. Lots of history that needs to be told. This should be published!

thanks for a great blog

Very well done. Thank you for the blog and the history lesson.