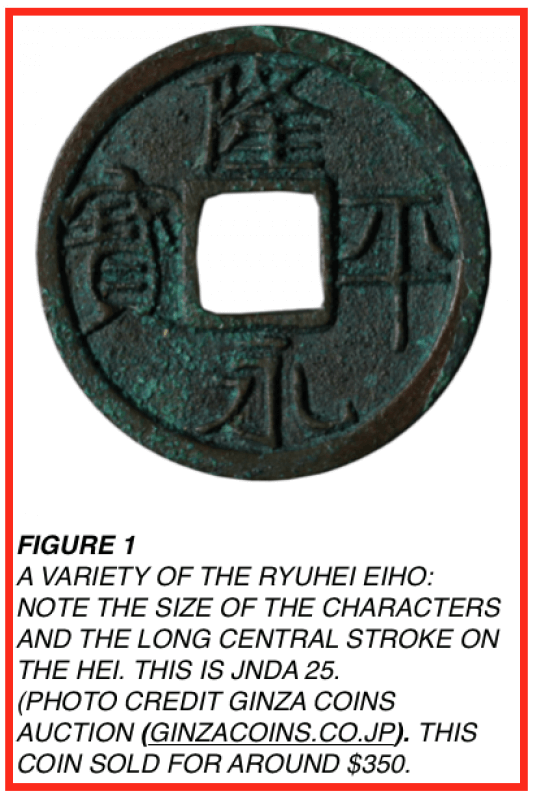 The Ryuhei Eiho was the fourth Japanese ancient coin and was issued from 796 to 818. Denominated as one Ryuhei Eiho to ten Jingo Kaiho (the previous coin in circulation), these coins were cast in copper. Many varieties of the Ryuhei Eiho exist, and they pertain to the size of the coin and characters as well as differences in the calligraphy. Six varieties are listed in the JNDA catalog, seven varieties are listed in the Munro catalog, and nine varieties are listed in the Hartill catalog. The inscription "Ryuhei Eiho" roughly translates to "Eternal Treasure of Prosperous Peace." These coins were issued in the Enraku era (782 to 806) under Emperor Kammu. The year after the Ryuhei Eiho was released, in 797, the Japanese government issued a decree to stop the Japanese citizens from hoarding coins. In 798, the government issued another decree stating that if a citizen was found to be hoarding coins, their wealth would be confiscated, divided into five parts, and distributed with one fifth going to the informant and the rest to the government. Another decree was issued in 800, and removed the ability for a Japanese person to buy a higher status with money. The Ryuhei Eiho was cast in copper, issued from 796 to 818, and produced during a time when the Japanese government was cracking down on coin hoarding.

Very interesting. Thank you for sharing. I see I have a lot of reading to do this weekend.

You have an amazing collection. I really enjoy your blogs. thanks for all the information ; )

Just a note: although I enjoy researching and writing about these coins, sadly I don't own any of the twelve ancients - yet.

I enjoyed your blogs as I said by it here we stretch them out. One a day two a week like that. Otherwise they will read one not comment on The others it's good info but a lot. There is no selling on the site. And I personally just me do not visit other sites. Just a suggestion think about it. Thanks again .

another interesting coin of the ancient 12!, looking forward to future posts on them.

All your blogs here are very good. If I can make a suggestion, we usually try to stay with one blog a day, sometimes two. Otherwise, very interesting.. Thanks..

I see what you mean. I'll keep that in mind when posting future blogs.

that is true; spreading out blogs also help's get more people to see them, as not everybody is going to read five blogs a week by the same person if they are on they same day, whereas if they are spread out, people are more likely to read them, and get to enjoy their wondrous content

Interesting. I probably would have not explored this coin had it nit been for your blog. Thank you and blessings!

Thank you for your comments! I like it when people enjoy my articles.